In Odisha, where late monsoons mean crop failures, poverty and even suicide, a novel scheme aims to boost water access

In the Niyamgiri hill range, a Dongria Kondh tribal woman says hill streams that used to flow until May are drying by March (Pic: Manipadma Jena)

“The farmer who is suicidal will follow the season’s calendar his father did,” says Gulpa Kadraka, sitting cross-legged on the mud floor of his tin-roofed shack in Kerandiguda, a village in the Niyamgiri hills.

This time a decade ago, Kadraka would have been weeding amid the soft summer showers, ready to sow millet as soon as the monsoon arrived in early June. Now, he doesn’t start preparing the red soil until he sees the rains, which come 30 to 45 days late.

In the eastern Indian state of Odisha, monsoon season is getting more variable with climate change – and to make matters worse, groundwater sources are in decline. It leaves farmers vulnerable to crop failure, poverty and social breakdown.

Two thirds of the state’s population depend on agriculture, but only one third of farmland has access to canal irrigation. The rest must wait for rain. This lack of water infrastructure contributes to severe food insecurity in 18 of the 30 districts.

Repeated crop failure is driving indebted farmers to distress, migration and even suicide. Between 2004 and 2014, close to 1,900 farmers took their own lives in Odisha, according to National Crime Records Bureau data released March. 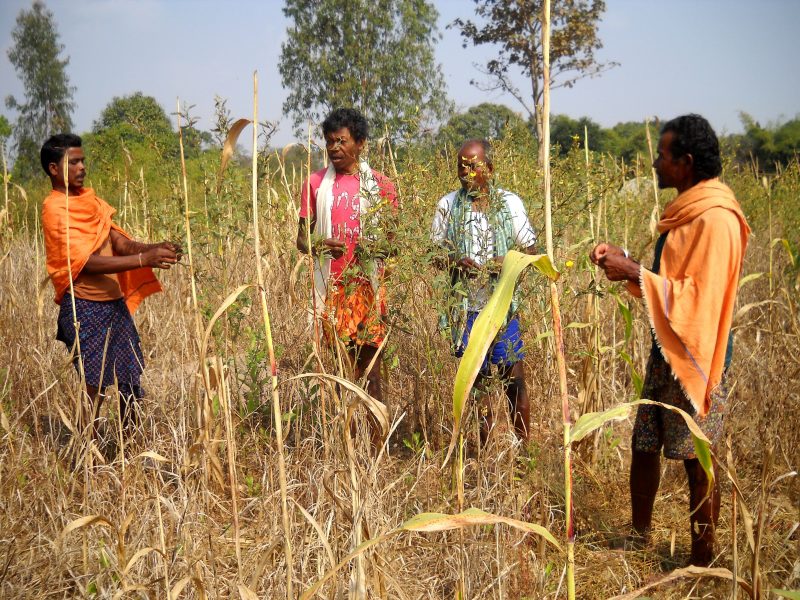 Smallholders in Nuapada district are worried as their crops wither in the dry conditions (Pic: Manipadma Jena)

Help is at hand. A groundbreaking 10 billion rupee ($166 million) programme aims to capture rain – whenever it may fall – to recharge groundwater sources.

Under the scheme, financed by the Green Climate Fund (GCF), World Bank and Odisha state government, recharge shafts will be installed along with 10,000 storage tanks between 2017 and 2021. Dug to a depth of 3.5 metres, these are to permeate a layer of clay soil that otherwise holds water near the surface, where it is liable to evaporate.

The GCF, a UN-backed climate finance body, is contributing $34m in grants, focused on the groundwater recharge element. According to the project brief on its website, 5.2 million people stand to benefit from better water access.

“Seventy-five percent of the recharged groundwater can safely be used to ensure a second annual crop,” said Pradeep Kumar Jena, a water resources official in the Odisha government who conceptualized the GCF bid.

At the same time, 1,000 solar pumps are to be distributed for micro irrigation, to distribute the water efficiently. The pumps are expected to save 3.27 million kilowatt-hours of energy and avoid carbon emissions of 2,614 tonnes a year, compared to diesel-fuelled alternatives.

There will be jobs for locals to dig the wells, said Jena, plus training of 20,000 youth to monitor the system as “jaal sathis” or “water buddies” and 500 maintenance engineers.

The idea for groundwater recharge came from a 12-village pilot under India’s National Adaptation Fund for Climate Change. It has never been applied over such a wide area before, said Jena: “There has been no major effort in India for largescale recharge of groundwater.”

The government engaged CTRAN, an advisory firm based in Odisha state capital Bhubaneswar, to prepare the project proposal. It also got approval from the federal environment ministry and technical clearance from the National Bank for Agriculture and Rural Development (NABARD), which will administer the grant. Involvement of multiple stakeholders helped to secure funds from the GCF, Jena said.