Thelma Krug has lost her job in a row over the precision of official data, say sources at the environment ministry

The head of Brazil’s anti-deforestation department has been fired in a dispute over the way trends are monitored.

Thelma Krug, who is also a vice chair of the UN’s climate science panel (IPCC), had held the post in the environment ministry since 2016.

In the 1980s, Krug helped create the remote sensing system that gives Brazil its yearly estimates of deforestation in the Amazon. In the ministry, she oversaw a project for monitoring clear-cutting in the cerrado, Brazil’s threatened savanna.

Last year, after the impeachment of President Dilma Rousseff, she was sacked by incoming minister Jose Sarney Filho, only to be readmitted the same day. The minister called the incident “an administrative mishap”.

The ministry told the press that Krug “expressed her interest in leaving”, so that she could “dedicate more time to her attributions at IPCC”.

Sources say, however, that the removal happened after a row with vice-minister Marcelo Cruz, who questioned the deforestation data produced by the National Institute for Space Research (Inpe), where Krug is a senior scientist. 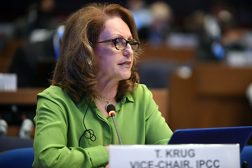 The environment ministry has been criticizing Inpe’s data for some time. The office complains that Prodes system, which gives yearly estimates, is “short-sighted” and only able to detect clearances larger than 6.25 hectares. It also contends that Prodes does not detect clear-cutting of secondary forests. Inpe replies that that both sets of data do exist, but they are not reported in order to have a coherent and comparable historical data series.

At the center of the controversy is an acceleration of deforestation in the Amazon. Rates fell most of the time between 2005 and 2012, then reversed trends and soared over the last two years. A 29% rise in 2016, to nearly 8,000 square kilometers, took officials by surprise and jeopardised Brazil’s legal commitment to reaching an 80% reduction from historical levels (to 3,900 square kilometers) by 2020.

Sources at the environment ministry say there is an internal debate about creating another monitoring system. In response to questions, the ministry did not deny the issue is on the table: it said Krug’s replacement was “able to debate possible changes to deforestation monitoring and control”.

The replacement is Jair Schmitt, a biologist who coordinates environmental inspection at Ibama, the agency that enforces forest protections. Known as a hardliner, Schmitt is credited with fining Santander bank R$ 47.5 million (US$ 16 million) last year for financing illegal deforestation.

In his 2015 PhD thesis, Schmitt advocated for tougher penalties and enforcement powers to bring deforestation under control.

Observers were shocked by the abrupt staff change and uncertain about the impact it would have. “Sacking Ms Krug was deplorable, but bringing Schmitt to replace her was a nice surprise,” said Raoni Rajão, a deforestation dynamics specialist at the Federal University of Minas Gerais.

Krug declined to comment on the specifics of the row. “The minister has the prerogative to appoint and dismiss people at his convenience,” she said. The scientist will continue her role at Inpe.