Despite the rhetoric, US president Donald Trump’s irrational climate order will fail to benefit the miners he has championed 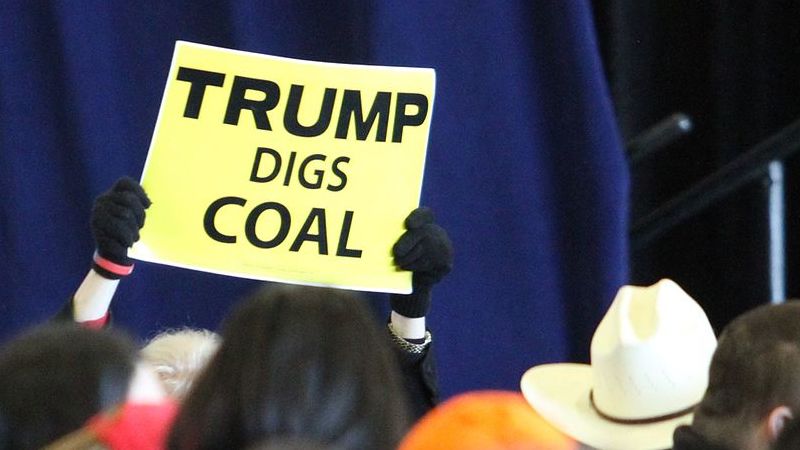 You can read the White House news release here, and probably should – the loaded language is at least as interesting as the content, the main ingredient of which is to scrap several elements of the Clean Power Plan under which President Obama hoped to bring down the carbon emissions of the US energy industry.

But when you look behind the words at what this order is supposed to do and the problems it’s supposed to cure, there’s no real rationale for any of it.

The US is already virtually independent in every form of energy – a net coal exporter, importing just 3% of its gas (and that mostly from neighbouring Canada). Only in oil does it lag, importing about a quarter of what it consumes – but that proportion is falling. Two things it will never have to import are wind and sun – yet if the order harms any particular form of energy, it’ll likely be wind and solar power.

Not likely. The solar industry, nascent though it is, already employs more than twice as many people as coal, and more than natural gas. One in every 50 new jobs created US-wide last year was in the solar power industry. An anti-renewables strategy is precisely the opposite of a job creation scheme. And as for bringing back coal jobs…

Er – no. According to Goldman Sachs, whose former employees appear to make up most of Trump’s cabinet, coal is in apparently irreversible global decline due to concerns over air pollution and climate change, the increasing economic competitiveness of renewables and the greater flexibility of gas. In the US, we can add in the age of existing power stations and regulations limiting mercury pollution. China and India want to become self-sufficient, and the US already produces more coal than it needs. The Australian government is desperately trying to find anyone at all to invest in a vast new mine in Queensland, but no bank will back the project. There’s no reason to expect anything different in Donald Trump’s US.

Well, possibly; but the US is in an international market that is already over-supplied. Producing more will bring the international price down still faster – unless the president persuades other countries to reduce their output, an outcome surely on the vanishing side of unlikely.

Stop the build-out of renewable energy (for whatever reason that might be considered desirable)?

No. According to the Energy Information Agency, renewables are now set to grow at 3.9% annually – were the Clean Power Plan to remain, the figure would be 4.7%. Hardly a sharp cut-off.

No. As in most other countries where surveys have been conducted, there are healthy majorities in the US (about two-thirds) in favour of combatting climate change and building out clean energy systems.

Hard to see this as a reality. Many Republican states already have programmes to limit emissions from power plants, promote energy efficiency and build renewables that go further than president Barack Obama’s federal plans. Conversely, the hardliners in president Trump’s inner circle, such as Steve Bannon, wanted the order to go much further.

Much head-scratching all round.

Nevertheless, the Order is in. So what next?

Some elements can be enacted virtually overnight, such as removing Obama’s moratorium on new coal-mining leases on federal lands. Others are likely to prove much more troublesome for everyone – except those in the legal profession.

Trump signs an order to Make America Dirty Again – flanked by coal miners. It's a betrayal of the Paris Agreement https://t.co/MhYAb9kzXF

If Trump is serious about reviving the fossil fuel industry and neutering the clean energy rollout, further legal battles loom with key states such as California.

Health-conscious, tech-loving and bedevilled by poor air quality, California has goals on clean energy and climate change that are at least as ambitious as Western European nations. Half of all energy from renewable sources and a 40% cut in carbon emissions (from 1990 levels) by 2030… such goals can only be resolved if California studiously ignores the message of this executive order, and sticks with its plans to make road vehicles more efficient.

Two things merit a further look because they are not in the executive order.

There is no word about the Paris Agreement, from which Trump, during his election campaign, vowed to withdraw. On this, at least for now, the doves within his administration – notably secretary of state Rex Tillerson and first daughter Ivanka – are winning the day.

And so far, there is no plan to scrap the ‘endangerment finding’ – the ruling that excess carbon dioxide in the atmosphere poses a danger to human health and wellbeing. Steve Bannon and other extremists desperately want to get this annulled – but trying to do that would do for the legal profession what hot air does for a balloon, and for now, it’s tethered.

There have always been two separate questions about the Trump presidency and climate change: what he would do, and what effect it would have.

Now, he’s given at least his initial answer to the first question.

As to the second… well, it’s clearly going to decelerate the movement towards a low-carbon energy system that’s been gathering momentum nationwide. Some existing coal-fired plants will remain open for longer, some renewable energy schemes won’t get built, some models of car will waste more fuel. Emissions will fall more slowly than they would have done, and could conceivably even rise.

But for all the reasons given above, the executive order isn’t going to take the US back to an imagined golden era when horny-handed miners and roughnecks chiselled the bedrock of the economy.

The economic rationale for boosting oil and gas production shrinks as production rises, state laws and simple economics will keep energy efficiency and renewables in the game, and as for coal – well, reviving a corpse tends to work for no-one outside the entertainment industry.

Make of that last thought what you will.

Richard Black is director of the Energy & Climate Intelligence Unit and a former BBC science and environment correspondent.