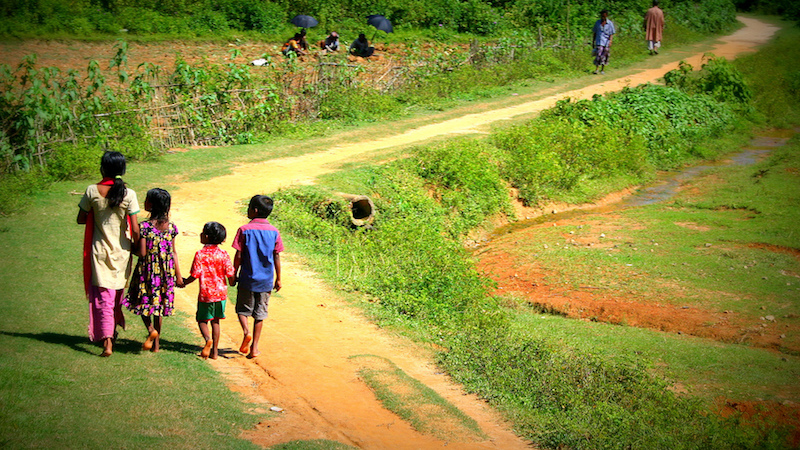 Children in Bangladesh face an uncertain present and future due to the effects of climate change.(Photo: Nasir Khan)

By Sébastien Duyck in Geneva

Governments must do more to protect the human rights of children as they try to tackle climate change, representatives of the UN and its member states have told high-level panel in Geneva this week.

Dozens of states spoke at the meeting, none argued that the rights of children were adequately protected under current policies.

The special meeting was convened by the UN Human Rights Council to review how governments protect child rights in the context of climate change. The conclusions will inform the council’s annual resolution on climate change and human rights in June.

In the prestigious room of the council in Geneva, panelists emphasised how governments are currently failing younger generations by not adequately addressing climate change.

Some panelists highlighted the wide range of child rights impacted by climate change. “Beyond simply threatening children’s lives and physical health, climate change poses a threat to children’s identities, their cultures, their livelihoods, and their relationship with the natural environment,” said Peggy Hicks, a director at the Office of the UN High Commissioner for Human Rights.

Unicef recently estimated that 500 million children live in flood-prone areas, 160 million are exposed to severe droughts, and 115 million are at high risk of tropical cyclones. Malnutrition – which is often exacerbated by climate impacts – is a contributing factor in 45% of all child deaths. Increased temperatures and associated impacts also exacerbate diarrhoea, malaria and pneumonia – three major causes of death in children under five years old.

Additionally, children are particularly exposed to and negatively impacted by air pollution. Three hundred million children live in areas where the air is toxic – a situation contributing to the deaths of nearly 600,000 children under age five every year.

Kirsten Sandberg, a member of the UN Committee on the Rights of the Child warned the governments gathered for the event: “A child rights approach to climate change is overdue.” She highlighted how existing, universally recognised legal obligations should – if enforced effectively – ensure that children do not bear such a heavy burden as a consequence of climate change.

Climate change is a matter of human rights, agrees UN

Last year, the council agreed to consider climate change and the rights of children in order to assess lessons learned from best practices and to identify opportunities to further integrate child rights in the implementation of the Paris Climate Agreement.

Children’s rights are the most widely recognised in the international community. Since its adoption by the UN in 1989, the Convention on the Rights of the Child has been ratified by every single state except for the US, making it the most universally supported of all international human rights instruments. The convention defines a set of rights that every government must protect.

Sandberg highlighted that the Convention on the Rights of the Child defined obligations for every state to protect the rights of children such as the rights to life, health, and adequate housing, as well as to ensure that children are consulted in matters impacting their lives.

Quoting the former Irish prime minister Mary Robinson, Sandberg said: “The world needs a groundswell of people equipped, not only with the knowledge to devise solutions to the climate crisis, but also the vision to see that all people must be included in, and empowered by, the global response to the great challenges of our time.”

Through the Convention on the Rights of the Child, all states have also recognised the right of children to education, including on matters related to the environment.

Governments speaking at the Human Rights Council agreed with Sandberg.  “It is essential to develop child-centred policies in adapting to climate change and mitigating its negative impacts,” the deputy minister of foreign affairs of Vietnam stressed, describing concrete policies developed within the country to protect children in the aftermath of disasters or through specific climate projects.

Ambassador Ahsan of Bangladesh emphasised the role that the Paris Climate Agreement could play to protect child rights, noting the objective of limiting global temperature increase to no more than 1.5C. The ambassador further stressed the importance of taking child-centred approaches, particularly in relation to national commitments and to climate migration during the climate negotiations resuming in Bonn in May 2017.

Many states attending the event also welcomed the recognition of children’s rights in the Paris Climate Agreement or reaffirmed their commitment to better integrate human rights in future climate negotiations – a commitment made formally by thirty-four states that have signed the Costa Rica led Geneva Pledge for Human Rights in Climate Action.

Closing the panel, 16-year–old Kehkashan Basu challenged the ministers and ambassadors gathered in Geneva, stressing that youth around the planet are “demanding the right to live with dignity, because we are the citizens of tomorrow… but we will not live to see tomorrow if our today is not taken care of.”

Sébastien Duyck is a senior attorney at the Centre for International Environmental Law. Follow him on twitter: @duycks

This article has been amended to correct a misspelling of Sandberg.