Burial mounds from the 5,000-year-old Funnelbeaker culture stand in the way of the proposed Ościsłowo opencast lignite mine 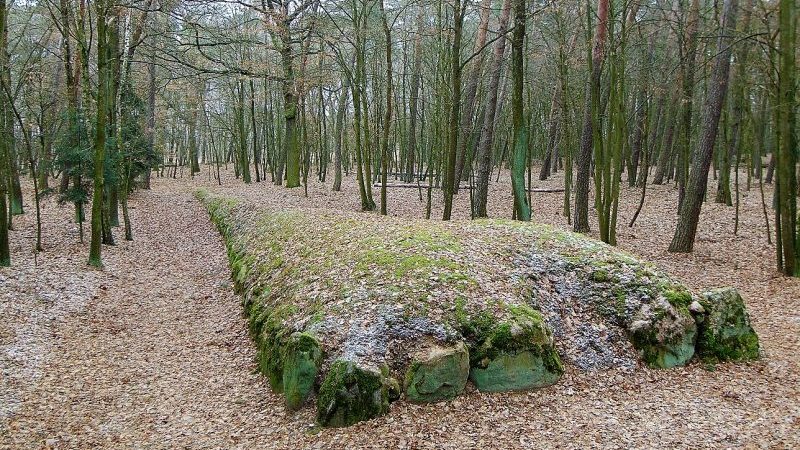 A proposed coal mine in Wilkopolska, central Poland, has been dealt a setback from history, with the discovery of Funnelbeaker burial mounds dating back 5,000 years.

Polish archeologists had thought the ancient tombs destroyed by agriculture taking place intensively in Wielkopolska for generations. To the untrained eye, they are easy to miss: nothing but long, narrow earthen hills covered up in vegetation.

These 15 burial mounds, 100 metres long, were saved by their location in a forested area. Over the centuries, they only lost their stone surrounds – likely collected and used for construction. Otherwise intact, they tell the extraordinary story of the culture which buried its dead in them.

“It was probably only by using oxen (rather, aurochs, the ancestor of the ox) that these people were able to transport the huge stones, weighing many tonnes and as high as 1-2 metres, used for building the megalithic tombs,” said Jacek Wierzbicki, archaeologist from the Adam Mickiewicz University in Poznan. “This was an enormous effort, comparable only to constructing the pyramids.

“Of course this kind of tomb was built not for everyone, but probably only for the most outstanding leaders, the tribal chiefs, the priests.”

The eastern people in the Funnelbeaker culture inhabiting contemporary Poland’s territories were the first to use ox-driven hoes to till the soil, explained Wierzbicki. Their successful farming techniques allowed an agriculture-based economic model to spread all the way north to Scandinavia, 5,000 years ago.

The earliest known image of what is thought to be a four-wheeled vehicle is etched on the Bronocice pot, a ceramic vase from that era discovered in Poland.

The ancient tombs were discovered in an archaeological survey last year. They are located right where private company ZE PAK,  the second largest lignite-based electricity producer in Poland, plans to develop an opencast lignite mine, Ościsłowo. Lignite is a low quality type of brown coal.

The Poznan regional authority in charge of preserving monuments said it was considering giving protected status to the 15 tombs, but that it would decide only after field research “once weather conditions allow it”. Protected status would be an obstacle to the mine project.

Meanwhile, ZE PAK can continue to apply for permits it needs to mine. At the end of last year, the Ministry of Agriculture agreed to the building of the mine on lands currently used for farming.

Campaigners argue the company must reassess the environmental impact of the project in light of the archeological discovery. The Poznan regional environmental protection agency, which is evaluating the plans, said there was no need for a new assessment.

A spokesperson for ZE PAK told national television TVN: “If in the future it turns out that archaeological sites are located on mining territory, we will act in accordance with the law.”

ZE PAK operates four power plants in Wielkopolska, fuelled by lignite from local mines whose locations shift over time as resources are exhausted. The company says it needs a new pit at Ościsłowo to make up for dwindling resources elsewhere. But some fear that Ościsłowo will hurt farming and tourism in the region.

Two of the three mayors of localities on the planned perimeter of Ościsłowo support the mine. The third is holding out.

Grzegorz Skowroński, the mayor of Wilczyń, argues Ościsłowo “would kill off” Lake Wilczyńskie, one of the five local lakes that people depend on for fishing and tourism. Skowroński commissioned a film showing the gradual depletion of water in the five lakes: a sequence of time lapses comparing what the lakes looked like years ago as opposed to now offers a striking sense of the damage.

The ancient tombs in the village of Góry, on the eastern edge of Wilczyń, which gives the mayor leverage in his opposition to the company.

In January, tens of locals from Wilczyń and other localities close to the planned location of the mine organised a protest in Poznan (the main town in Wielkopolska) asking authorities to halt the mine plans and protect the archeological heritage instead.

“The mines are like a cancer eating out into the lands and lakes of Wielkopolska,” said Jósef Drazgowski, an anti-coal activist and owner of a holiday house on the edges of another drying lake, Ostrowski.

“It’s not possible that this place (the ancient tombs) are destroyed or forgotten, our descendants would never forgive us,” added Drazgowski. “The whole world should instead learn about this cemetery as soon as possible.”

The Polish government, run by nationalist party Law and Justice, does not have a clear position about the future of Wielkopolska.

On the one hand, Law and Justice is an enthusiastic supporter of coal, which its leaders see as part of the future of Poland over the next decades, despite EU climate policies and the Paris Agreement signed by Warsaw which call for the phase out of the use of this dirty fossil fuel.

On the other hand, the party’s nationalistic line may make it difficult to defend the destruction of historical treasures that prove the European-wide importance of a culture inhabiting ancient Polish lands.

Long-term resistance to new mining finds some sympathy even in central government. Speaking during a conference about mining in Wielkopolska in February, undersecretary of state in the Ministry of Environment Mariusz Gajda told environmentalists: “I am completely on your side: open-pit mining is a catastrophe. We are even ready to change the law to protect local communities from the negative impact of open-pit mining.”

This article was supported by Foundation DY-OPMN