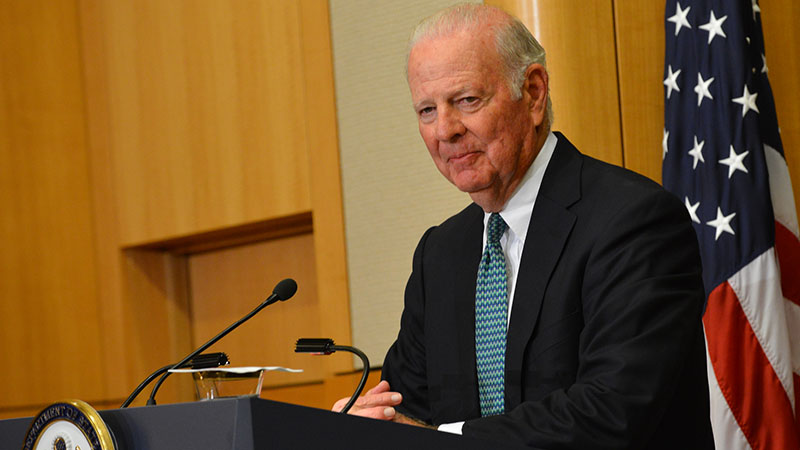 That’s the pitch a group of senior Republicans will make to the White House on Wednesday, encouraging the Trump administration to modify its tone on global warming.

“It’s really important that we Republicans have a seat at the table when people start talking about climate change,” Baker said in an interview with the New York Times.

In a line that will chime with many of his political ilk, Baker added he did not accept humans were the key driver of warming, but said doing nothing was a massive gamble.

“I don’t accept the idea that it’s all man made… but I do accept that the risks are sufficiently great that we need to have an insurance policy.”

The proposed carbon tax would start at US$40 a tonne of carbon dioxide and gradually increase, signalling US intent to cut emissions to business and rewarding citizens with tax dividends.

In one example cited on the proposal – the Conservative Case for Carbon Dividends – a family of four could recoup as much as $2,000 in payments in the first year of roll-out.

Why $40?
The figure is roughly in line with US Environmental Protection Agency (EPA) calculations on the damage a tonne of CO2 can inflict on the planet. It’s much higher than carbon prices in the EU (just over $5) and China’s pilot carbon pricing schemes ($2-5) but in contrast to those schemes the revenue would be redistributed to households. It would raise $200-300 billion a year.

“Carbon dividends would increase the disposable income of the majority of Americans while disproportionately helping those struggling to make ends meet,” says the report.

“Yet these dividends are not giveaways; they would be earned based on the good behaviour of minimizing our carbon footprints.”

In a sop to US right-wingers the plan includes a complete repeal of Barack Obama’s flagship plan to reduce emissions from the power sector, on the basis it would no longer be necessary.

Yet the proposal stresses that the “initial carbon tax rate should be set to exceed the emissions reductions of current regulations,” to ensure it wins bipartisan support.

The proposals are likely to be fiercely opposed by some of Trump’s supporters like the libertarian Competitive Enterprise Institute (CEI), which describes any such tax as “market rigging”.

US secretary of state Rex Tillerson is a noted supporter of a revenue neutral carbon tax, arguing at his confirmation hearing last month it would replace the “hodgepodge” of current measures.

“If a carbon tax is put in place, it has to be revenue-neutral. All the revenues have to go back out to the economy through reduced employee payroll taxes,” said the former Exxon-Mobil CEO.

“This is simply a mechanism to incentivize choices that people are making. It’s not a revenue-raiser.”