Dutch join forces with Japan, UN among leading donors for project aimed at helping countries understand how they can cope with climate impacts 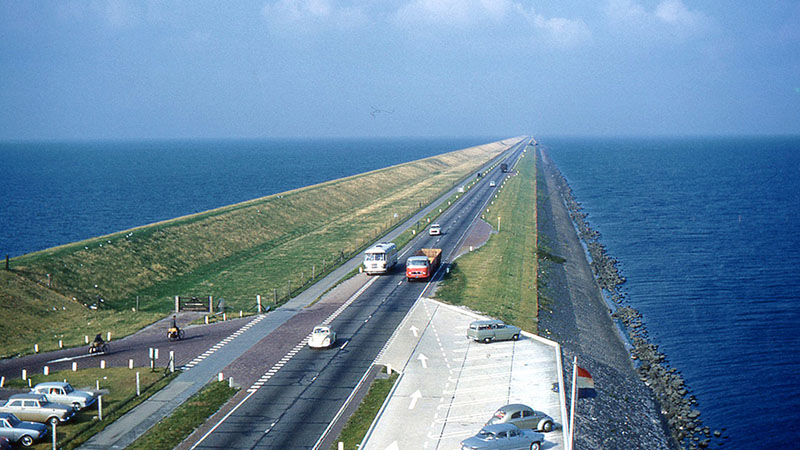 A 1963 picture of the Netherlands' vast flood defences. On the left is the North Sea (Pic: Roger W/Flickr)

A new climate adaptation centre will open in the Netherlands by the end of 2017, charged with helping countries cope with an expected uptick in extreme weather events.

Backed with €1 million from the Dutch government and further support from Japan and the UN Environment Programme, the project is being billed as an adaptation skills-hub.

“If Bangladesh asks us for help in making an adaptation programme we could support it by organising that – we know a lot about combatting rising sea levels.”

Other areas of focus are likely to include climate resilient crops, water management and the potential to use new technologies to boost farming efficiency, she said.

These kind of preparations are essential for vulnerable and developing countries given the projected impacts of climate change, highlighted in a 2014 report from the UN IPCC climate science panel.

“It is very likely that heat waves will occur more often and last longer, and that extreme precipitation events will become more intense and frequent in many regions. The ocean will continue to warm and acidify, and global mean sea level to rise,” it said.

The €1 million funding would not reduce the Netherlands support for global adaptation projects it is committed to, but it could help leverage more funding for an under-resourced issue, Dijksma stressed.

“We [developed countries] made a promise to deliver $100 billion by 2020 and this will not prevent that, but €1m here could have a multiplier effect far bigger than that,” she said.

Of the $367 billion directed towards climate-rated projects in 2014, just $27 billion was allocated for adaptation, a Climate Policy Initiative study revealed in late 2016.

Bangladeshi climate adaptation expert Saleemul Huq welcomed the initiative, and urged the centre to take advantage of his country’s deep knowledge of community based adaptation.

“Setting up a global centre of excellence on adaptation to climate change in the Netherlands is an excellent initiative as they have a lot of experience in structural adaptation solutions,” he added.

“This needs to be a centre that genuinely supports, empowers and benefits those on the ground, with locally-relevant and people-centred solutions,” said Harjeet Singh, ActionAid’s global climate change lead.

“We hope that this initiative will also help strengthen national and regional institutions in vulnerable countries, which are still in dire need of resources for research and implementation.”