Disruption is quite literally on BP’s doorstep. Two electric cars sit charging on the square outside its London headquarters.

Through the lobby and down the stairs – please hold onto the handrail, for your health and safety –the chief economist presents his 2017 energy outlook to a packed room.

It is Spencer Dale’s time to shine. He is relaxed and affable as he paints a future of robust oil demand and (oops) busted climate targets.

“Any single projection or forecast 20 years ahead will almost certainly be wrong,” he says, getting his disclaimer in early. “It is about understanding the uncertainty you face.”

Uncertainty for oil and gas demand is uncertainty for the climate. And this year more than ever, the narrative turns on climate action: not if the clean energy revolution will take off, but when.

The conclusion is familiar: greenhouse gas emissions will slow but not peak early enough or fall fast enough to stay within the temperature limits 195 countries have committed to.

“You might not like it and you might not really agree, but basically energy companies are saying the Paris Agreement is not going to transform the energy sector sufficiently fast to achieve the 2C target,” says Jonathan Grant, a director in PwC’s sustainability unit.

In the detail, though, there are signs the landscape is shifting in the climate’s favour. Predictions for renewable energy and electric vehicles have been revised up again since last year; fuel demand and emissions revised down.

And a supplementary analysis offers a hint of how the electrification and automation of private transport could be more disruptive than BP dares imagine. 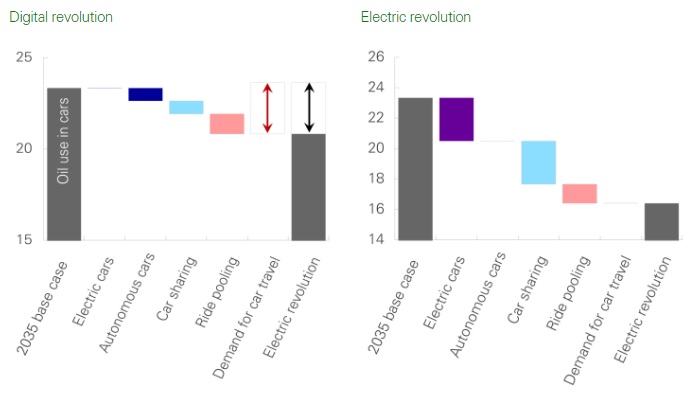 In the base case, 100 million electric vehicles hit the market by 2035, accounting for 6% of the global fleet. “The impact of EVs on its own is relatively limited,” says Dale, reducing oil demand by 1.2 million barrels a day compared to business as usual – a drop in the ocean of 23Mbbl demand growth.

Disingenuously, though, he separates the volume of EVs from the way they are used. Self-driving technology, car sharing and ride pooling are likely to radically reduce the number of vehicles needed, in tandem with a shift away from the internal combustion engine.

Bloomberg New Energy Finance estimates as many as two thirds of cars on the road could be electric by 2030, as these trends combine.

“EVs are at such an early stage of market introduction, there is massive uncertainty,” says Greg Muttitt, analyst with Oil Change International. “But there are very realistic scenarios that have EVs being a much larger proportion of the market.”

Reflecting the oil majors’ preference for carbon pricing as the purest tool to curb emissions, there was barely a mention of regulation.

It is a striking omission, as cities around the world take drastic smog-busting measures. Delhi has banned diesel cars more than 10 years old. Beijing is subsidising electric cars and restricting registration of conventional models. Paris, Madrid, Athens and Mexico City plan to take diesel cars off the road by 2025.

What nonsense from #BPstats Climate change is greatest market failure in history. The market won’t fix it alone. https://t.co/mqwKL2KGoP

Dale says the primary purpose of the energy outlook is to inform BP strategy, due out next month. A climate-conscious oil major would rigorously limit exploration to low cost fields, avoiding frontier ventures like the Arctic. Let’s see.

These exercises – undertaken by every oil company – are also a key communications tool. “They create a fatalism among policymakers and investors, that of course the world is going to be dependent on fossil fuels for decades,” says Muttitt. “I think their aim is it becomes a self-fulfilling prophecy, because it plays down a sense of a transition being possible.”

Grant, who spent seven years working for Chevron, is more generous. “In my experience talking to people in BP, there is genuine and serious engagement on the low carbon transition,” he says.

At the least, there is a move towards transparency. Dale invites the audience to toggle the assumptions and send in their own scenarios. This is not the last word.

Walk out of BP Energy Outlook 2017 to this view. Can’t help feel they’ll be adjusting EV projections upwards once again next year…#bpstats pic.twitter.com/1GvQC21JUT

This article has been corrected. Jonathan Grant used to work for Chevron, not Exxon. Sorry for the error