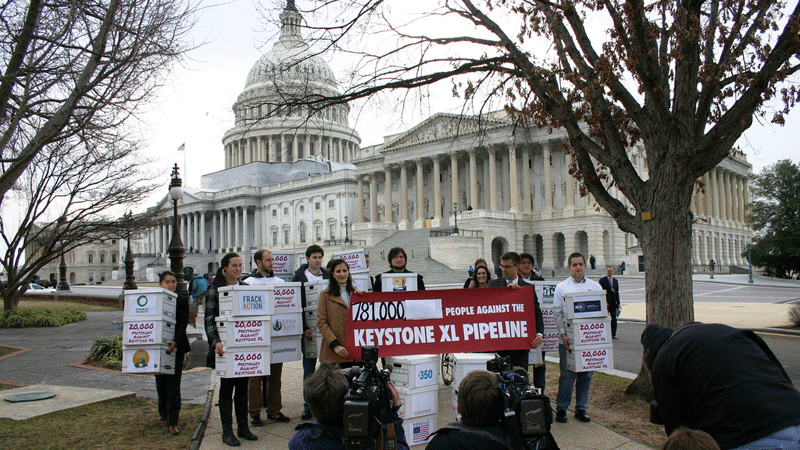 Protesters gather outside the Capitol to urge senators to reject Keystone during the Obama administration (Pic: 350.org/Flickr)

Donald Trump will reinstate the Keystone XL and Dakota Access Pipelines – both of which failed to pass muster under his predecessor – it was reported on Tuesday.

Shares in TransCanada, the construction company behind the Keystone XL pipeline, jumped in early trading on Tuesday as it was reported by Bloomberg that president Trump would reverse Barack Obama’s decision to reject the project.

The move, thus far unconfirmed by the White House, comes as little surprise after Trump’s keenness embrace the oil industry was trailed throughout the election campaign. Rumours of the announcement have circulated throughout the week.

Environmental groups were quick to voice their anger at the news. Greenpeace USA Executive Director Annie Leonard accused the president of “giveaways to his fossil fuel cronies”.

“Renewable energy is not only the future, but the only just economy for today. Keystone, the Dakota Access Pipeline, and fossil fuel infrastructure projects like them, will only make billionaires richer and make the rest of us suffer. We will resist this with all of our power and we will continue to build the future the world wants to see,” she said.

TransCanada shareholders woke up a little better off this morning pic.twitter.com/6fXHASz17V

In a press conference on Monday, White House press secretary Sean Spicer told reporters: “I’m not going to get in front of the President’s executive actions but I will tell you that areas like the Dakota and Keystone pipeline areas that we can increase jobs, increase economic growth, and tap into America’s energy supply. That’s something that he’s been very clear about.”

Keystone XL is a proposed 1,897km pipeline that would carry 800,000 barrels of tar sands oil from the pits of Alberta to the US network. Tar sands are among the most carbon intensive of oil sources. Obama rejected the project in 2015 after five years of prevarication saying the project would have “undercut” the US’ global leadership on climate.

Obama’s government also declined approval for the Dakota pipeline, which was the scene of a pitched battle between native American protesters and police during 2016.

Trump expected to promote construction of #Keystone pipeline — @ChristineRomans explains why it's so controversial. https://t.co/3rTaalF0NZ