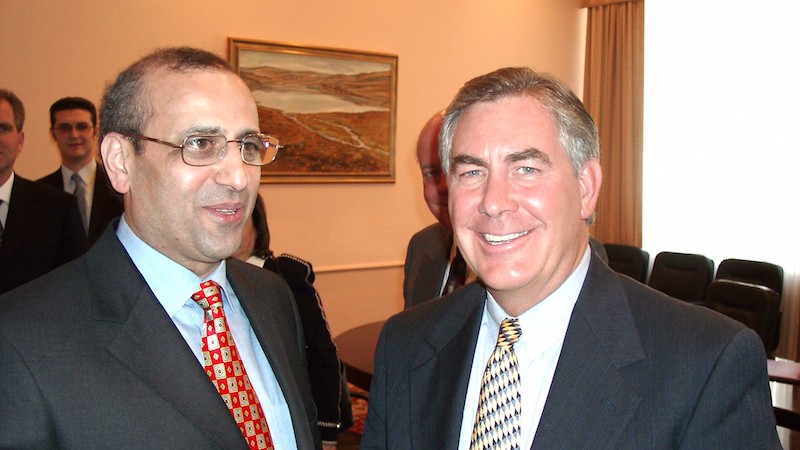 Igor Yusufov (left) meets Rex Tillerson in 2002 in Moscow. Yusufov was then CEO of Rosneft and Tillerson was an executive vice president at Exxon. Photo: Aleksey Turbin

Exxon Mobil’s stalled exploration of the Russian Arctic is set for a reboot as Donald Trump takes the White House.

With former Exxon boss Rex Tillerson at the State Department, Trump is likely to lift sanctions on Moscow and usher in an oil investment boom.

That is the view of Igor Yusufov, CEO of the state oil company Rosneft from 2001-2004 and energy minister during Vladimir Putin’s first term as president.

Yusufov will attend Donald Trump’s inauguration in Washington on Friday, which he hopes will herald a new era of relations between the two countries.

Closer ties “would open the doors for massive investment into the Russian oil and gas exploration and production,” he told Climate Home by email.

He expressed confidence sanctions imposed by the US after Russia’s invasion of the Crimea would be lifted, citing a senior Trump advisor. Anthony Scaramucci told the World Economic Forum this week sanctions had had the “opposite effect” to their intention.

At State, Tillerson could get Exxon off human rights chargeshttps://t.co/mCkL8qpEUq pic.twitter.com/osqvHtywK0

A joint Exxon-Rosneft project in the Kara Sea that was abandoned in 2015 has an “excellent future”, he added.

“I see it as the first step to the future cooperation of giants as Exxon and Rosneft in hydrocarbons production in Arctic regions… shortly we will get the encouraging news on the discovery of a new important deposit”.

Yusufov now runs a US$2bn investment foundation for exploring for oil and gas in Russia. But his former deputy told the Guardian last week he maintains close ties to the Kremlin.

He has known Tillerson, who recently resigned as the boss of Exxon to make himself available as Trump’s top diplomat, since 2002.

In December 2015, Russia was among 195 countries to adopt the Paris Agreement, agreeing to reach net zero carbon emissions in the second half of this century. That means ending a reliance on fossil fuels.

“Russia sees the Paris Climate agreement as a cornerstone of the future environmentally conscious world… we all either think about effective and generally excepted ways to cut down emissions or confront disastrous consequences pictured for years in catastrophic movies,” said Yusufov.

“At the same time we clearly understand, that at this stage the Russian economy would not survive without hydrocarbons our companies explore and produce.”

This raised the prospect of a transition to renewable energy and the production of carbon nanotubes, which he said could stop millions tons of CO2 from entering the atmosphere by replacing intensively manufactured materials.

This transition, he said, could be bolstered by renewed collaboration between the US and Russia on energy.