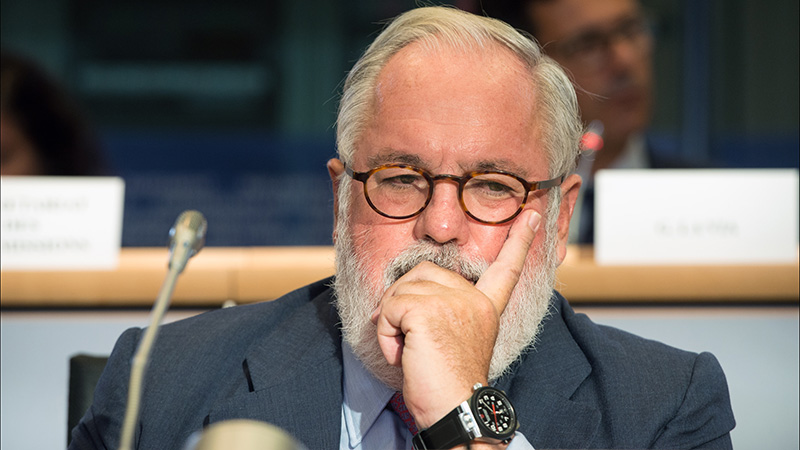 The drafts have already circulated widely among NGOs and journalists, in more of a shower than a “leak”. So there were few surprises when commissioner Miguel Arias Canete officially launched the package on Wednesday.

As a ribbon on top, Canete announced the 2030 energy efficiency target will be upped from 27% to 30% – sold as cutting reliance on Russian gas and creating 400,000 jobs, as well as reducing greenhouse gas emissions.

But its very continuity is a welcome contrast to the upset across the Atlantic, where Donald Trump’s election three weeks ago threatens to reverse eight years of progress.

“The signal that the EU is sending is that there is political consensus to go down the clean energy route,” said Michael Jacobs of the Institute for Public Policy Research, a centre-left London based think tank. “Donald Trump is not shifting us one inch, one centimetre from this path.”

The president-elect of the US is promising to scrap restrictions on coal, oil and gas production in his first 100 days in office. In Washington’s hyper-partisan system, he gets to replace all the top officials who might otherwise tell him that’s a bad idea. It reveals the fragility of climate gains his predecessor Barack Obama pushed hard for at home and abroad.

Brussels has a more stable mandate, having thrashed out the broad direction of next decade’s climate and energy policy between 28 member states in 2014. National governments may come and go – and the UK is set to leave by 2019 – but generally European Commission policymakers stick to their course.

The measures for next decade do not put the bloc on a “credible pathway” to meet its 2050 climate target, said Teresa Ribera, director of Paris-based think-tank IDDRI and a former climate minister in Spain.

“Energy efficiency and renewables targets are largely a continuation of past trends and these are therefore not ambitious enough to do that,” she told Climate Home.

But the governance plan gives member states an opportunity to increase their contributions, on a timetable more aligned with international review cycles. That could prove to be a significant lever for further action.

Europe is not immune from the strain of nationalist populism that propelled Trump to power. The far-right Law and Justice government is fiercely defending Poland’s ailing coal sector, while the Brexit vote has inspired Eurosceptics in several member states.

“If a number of governments go to the extreme right, of which there are some signs… it could shatter that [climate policy] consensus,” said Jacobs, a former adviser to the UK government. It would be a mistake to pre-empt that result, he added: “That shouldn’t be seen as a foregone conclusion.”

Trump won: It’s time for climate NGOs to stop preaching to the choir

Internationally, the speedy ratification of the Paris Agreement by countries from China to Saudi Arabia shows unprecedented agreement on the direction of travel.

With US commitment to the pact in doubt, as third largest emitter globally the EU is more important than ever.

“The question is will the EU be a deal-taker or a deal-maker,” said Canete in a press conference. “This [package] will help turn the Paris Agreement into concrete action.”

Emerging economies will be watching for tips on developing low carbon sectors.

Chandra Bhusan from the Centre for Science and Environment – one of Delhi’s top think tanks –  is confident the EU can over-deliver on its 2030 pledge.

“Solidarity between the US and EU in many ways I think reduces the ambition of the EU,” he said. “Trump is going to do all sorts of silly things. It is time for the EU to take a much more leading role.”