Six bright ideas lighting up Africa from the grassroots

It’s as much about the business model as the technology: here’s how innovators are making a big difference with small-scale solar 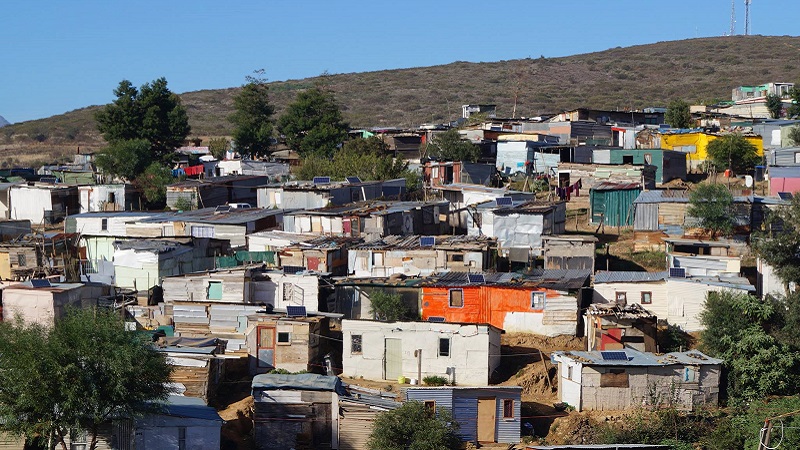 In sub-Saharan Africa, almost 600 million people live in the dark. The electrification rate in rural areas is as low as 14% and with climate change already affecting the continent, people are increasingly turning to clean energy to bridge the gap.

While countries such as Morocco, which hosts the world’s biggest solar photovoltaic plant, are ready to embrace the power of large-scale renewables, solar technologies still lag behind in many African regions. Unpredictable subsidies, poor installations and lack of training on how to maintain the solar panels have hindered the spread of solar.

Rural areas in sub-Saharan Africa are peppered with broken solar panels, often not installed properly or donated by institutions that could not cover maintenance costs. This fuels the belief that solar photovoltaic is a bad investment.

But where large-scale projects fail to reach those in need, entrepreneurs are taking over to show that small-scale solar can be versatile, a source of income and perform a surprising variety of functions. Here are six ideas that are changing the perception of solar energy in modern Africa.

Swahili for “borrow”, “kopa” is the keyword at the heart of one of the most successful solar enterprises in sub-Saharan Africa. It combines mobile technology, microcredit and clean energy.

M-Kopa targets the rural poor of Kenya, Tanzania and Uganda, who survive on an average of less than US$2 a day and cannot afford to buy solar panels outright.

The hardware package is a small solar panel and battery to power three led light bulbs, a phone charger, and a radio. It comes with a SIM card for payment – and here’s the clever bit.

Customers pay 3,500 Kenyan shillings ($35) upfront, followed by daily instalments of 50 shillings ($0.50). Once the daily payment is made via mobile, a signal is sent that switches on the system. After a year’s worth of payments, they own the system and use it for free.

Solar suitcase is a portable system that fits in a small box and has been deployed in various African countries. The prototype was originally developed by the California based charity We Care Solar to improve the conditions of maternity wards in rural Nigeria.

During a research trip, the charity’s co-founder discovered that in many maternity wards electricity was sporadic. That meant that nighttime deliveries were attended in near darkness, surgeries had to be canceled and critically ill patients would often lose their lives due to the lack of lighting.

The prototype was so successful that is now used to power schools, orphanages and homes all over rural Africa, with the active participation of communities and local institutions, most recently in Kenya. 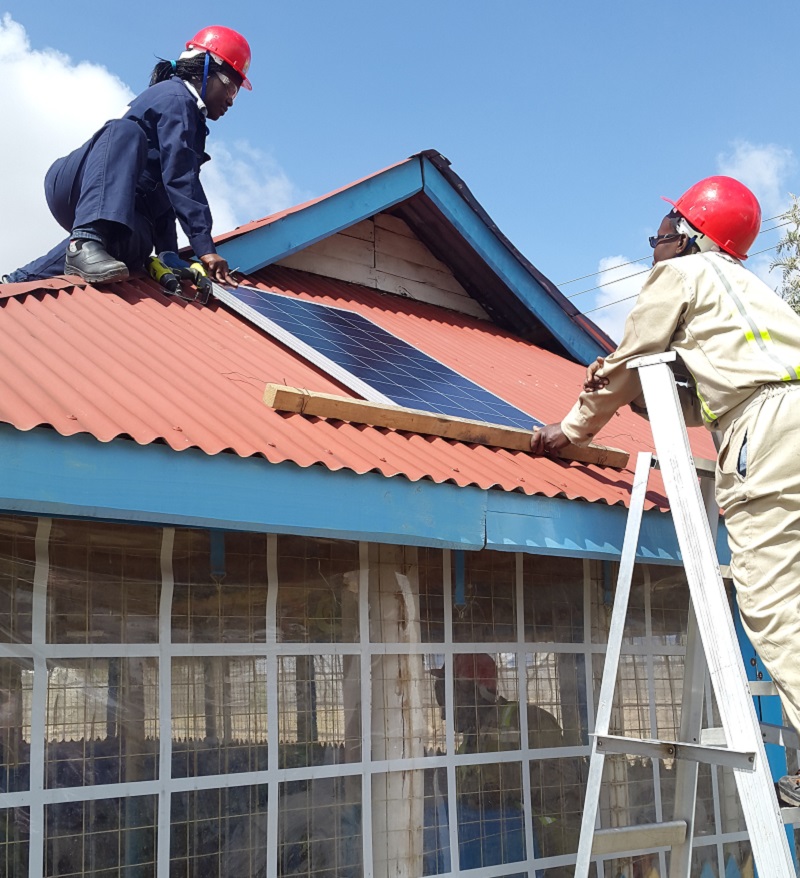 Here, a team of local female solar engineers install six solar suitcases as part of the country’s pilot project, which hopes to put women at the forefront of a clean energy revolution.

Citizens of rich nations take their fridges for granted. But a couple of hours of occasional power shortage and the weekly shopping ending up in the bin are a reminder of the importance of cold storage.

In developing countries up to 45% of the food that is not kept fresh after harvest spoils quickly. As a result, 470 million small-scale farmers are lose about a quarter of their annual income in Africa, Southeast Asia and Latin America, according to Nnaemeka Ikegwuonu, founder of the company Cold Hubs.

The Nigerian entrepreneur, who is a radio presenter and a farmer himself, turned to solar power to provide cheap and effective refrigeration to million of farmers.

He set up solar-powered cold rooms in major markets, where farmers can store their produce for a daily fee. Refrigeration extends the lifespan of vegetables from two to 21 days, reducing waste and boosting farmers’ income.

In Africa, it’s not only rural people who struggle with energy access. As Climate Home reported, the urban poor often live in off-grid fringes of major cities.

For the past four years, the town of Stellenbosch in South Africa has been involved in a pilot project aimed at demonstrating that solar power can work for urban slums.

With funds from the South African Government’s Green Fund, the Ishack project has been providing off-grid solar on a pay-for-use basis to residents of the local informal settlement, also training them to install and maintain solar panels. 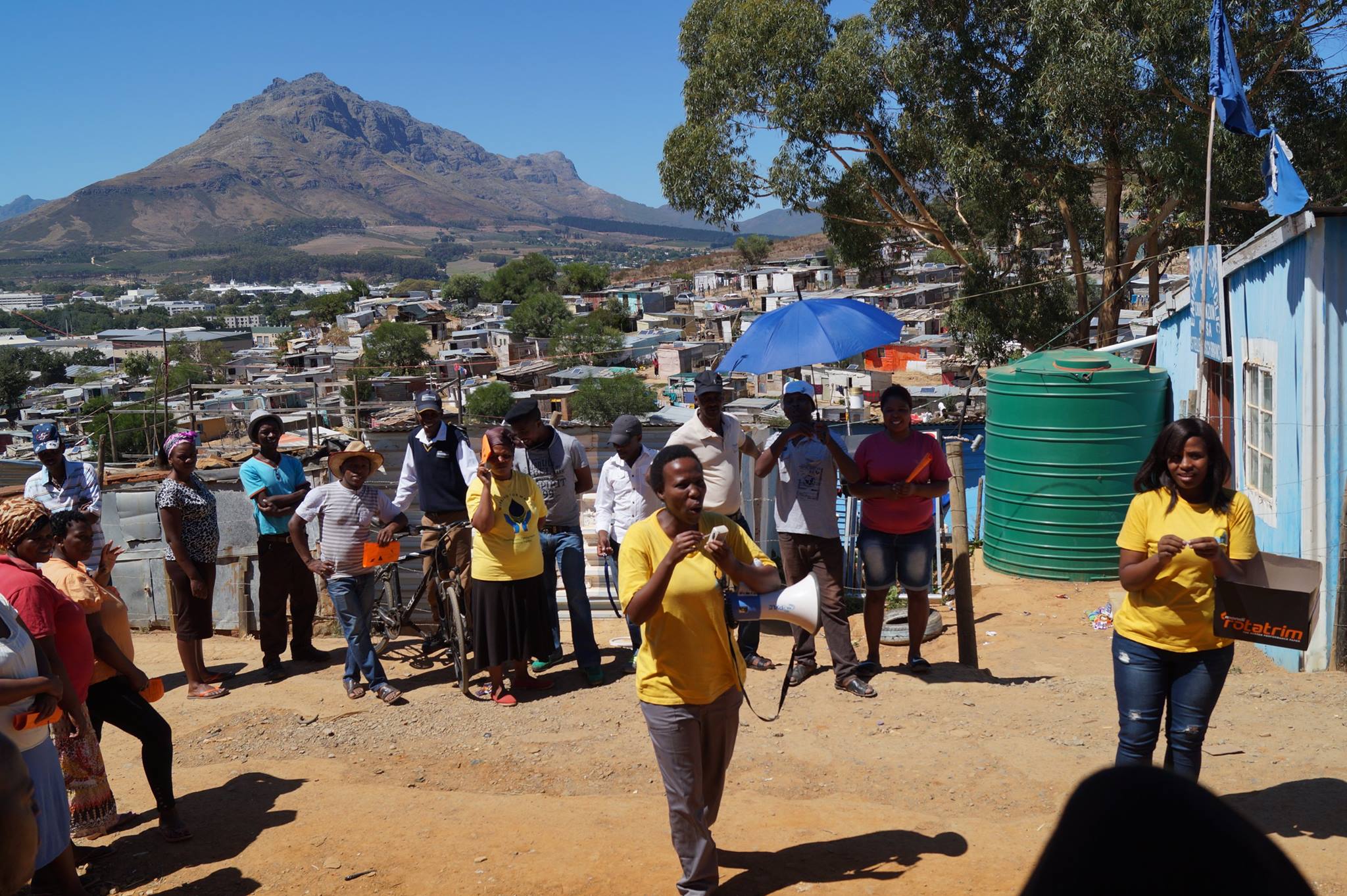 Although based on donations, the project aims at finding a replicable, self sustaining business model for the urban poor, generating jobs and bringing down the prices of solar services so everyone can afford them.

The initiative has so far powered over 1,000 households and aims to expand its reach to the 2,500 homes of the area, setting an example for other informal settlements in Africa

“Africa is a continent of entrepreneurs” said Xavier Helgesen, co-founder of the company Off-Grid Electric. “From the farmer selling her harvest, to the salon owner serving his neighborhood, to the shopkeeper charging mobile phones, these are the businesses that are the lifeblood of local communities.”

After building its huge client base and expertise in the solar field by powering rural homes in Rwanda and Tanzania, the company has now launched Kazi na Zola, a portable solar system targeting small businesses, in particular phone charging shops, restaurants and barber shops.

For a monthly fee, shopkeepers can offer a higher value service to their customers, boosting profits.

The standard kits come with a solar panel, battery box, LED lights and a radio. Barbers get electric hair clippers, phone-charging stores get solar lanterns that they can rent, and restaurants get a TV. The company also plans to introduce solar kits for internet cafes, health clinics and computer labs.

Of the estimated 1.6 billion people currently living without electricity in the world, 70% are women.

Women are the main consumers of household energy and know better than the men what they need to run a home or a small farm.

Although portable solar technologies are well established, distribution is still a challenge in remote communities.

Solar Sister is a network of female entrepreneurs that tackles the problem by involving African rural women in the distribution of solar products within their villages. The social enterprise now counts over 2,000 members in Uganda, Rwanda, Tanzania, South Sudan and Nigeria, bringing light to more than 370,000 people.

On top of generating income from sales, families can drop the use of kerosene, keep their animals warm and healthier, and provide light for the kids to do their homework after dusk.