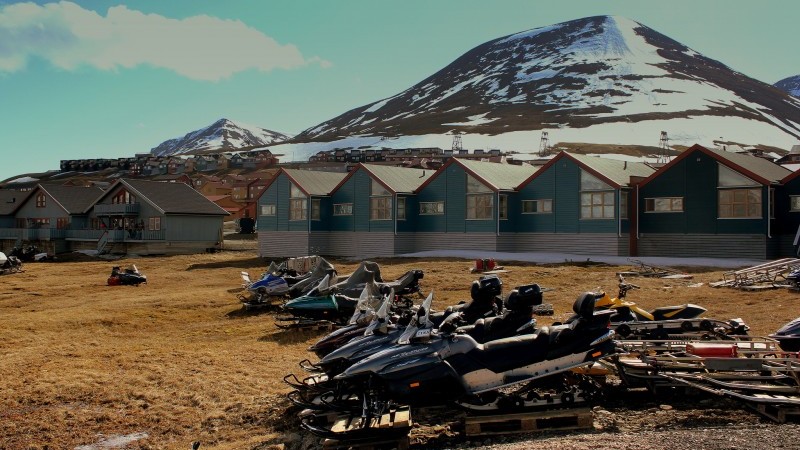 It has been an autumn like no other, says Kim Holmén international director of the Norwegian Polar Institute, from his office in Longyearbyen.

“It is about 10C above the normal for this time of the year. And plenty of rain throughout October and November, which is unusual at best,” says Holmén. “Today it is minus two, which is balmy for this time of year. But it is just a few days since we’ve had the first freezing event.”

Reports of wildly abnormal weather and ice conditions across the Arctic have resulted in a blizzard of graphs and reports in recent weeks. For residents of the main settlement on the Norwegian archipelago of Svalbard, the weirdness reverberates through the community, causing fear and uncertainty.

Ice in Svalbard is an integral part of ecosystems, society, even the land itself. But this year, it has failed utterly. By November, the great arms of the Arctic sea ice would normally have wrapped the archipelago in its crushing, cracking embrace. But the ice fringe remains hundreds of kilometres to the north.

“It is a very different Svalbard that we are seeing now. The fjord doesn’t freeze and there were people fishing for cod just last week still; and that the cod themselves are in the fjord is an indication of a warmer ocean,” says Holmén.

Instead of bitterly cold wind driven across the ice, the sea is governing the weather in Svalbard; bringing rain, rain and more rain. Between October 2015 and October 2016, the island was hit by 64% more rain than normal.

That doesn’t account for a storm on 8 November in which nearly three times the monthly average fell in a single day.

The glaciers, which grow through the late autumn and winter are still retreating and the rain breaks the ice apart. Warm water seeps into the land, exacerbating the melting in the soil.

After the last storm, a portion of Longyearbyen was evacuated because of fears of a landslide. Last December, a man was killed when an avalanche buried about 10 houses.

“People are worried and disturbed,”  says Holmén. All those living on Svalbard are migrants, there is no indigenous population. Holmén hints that this may mean they might be less likely to cling on in the face of change.

“Certainly [they] feel it very strongly under their skin that this is not good. I think there are some people that are considering if it is worthwhile to continue being here.”

Residents await the results of a Norwegian government report into the changing landscape. It may decide that some parts of the town are unsafe and have to be moved. “It certainly will be a tremendously costly and painful process,” says Holmén.

Although, he adds, at least some residents welcome the changes. There is the prospect of new industries, such as a year-round cod fishery or the arrival of the lucrative snow crabs from the south.

But for many of the species that rely on the ice, this competition from warmer climes is a death knell. Arctic bird species are plummeting in number as they are out-matched by southerners.

The effect on the islands’ famous polar bears is uncertain because the population is still rebounding since a hunting ban was put in place in 1973.

Some species will cling for while to the disappearing glacier faces, says Holmén: “There is no land north of us. There is nowhere to migrate towards if the climate changes such that their specialisation rather than a competitive advantage becomes a loss compared to the temperate species that are moving in.

“So we are seeing the Atlantification of Svalbard. For the specialised species it is grim because the areas with that type of habitat are diminishing.”

Your daily reminder—until this makes front page news—that what’s happening right now at our planet’s poles is *not* normal. pic.twitter.com/1VK0BgcuS8