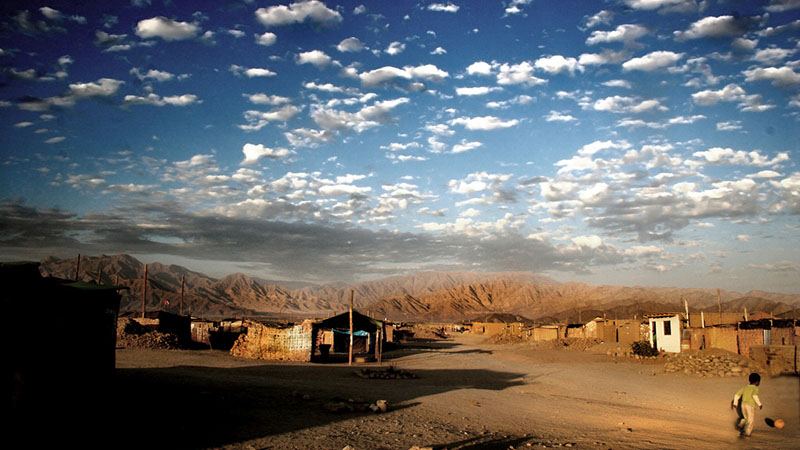 A boy plays football in a shanty town on the outskirts of Ica, Peru, a country facing severe climate impacts (Pic: Graeme Law/Flickr)

By Amal-Lee Amin in Marrakech

The Paris Agreement’s entry into force should be celebrated. Little will be achieved, however, unless governments turn words into action.

Although Latin America and the Caribbean are confronting a difficult economic situation, there is a strong case for implementing the agreement, which can build prosperity while creating more resilient and low-carbon economies.

Latin American and Caribbean countries are well-positioned to implement the agreement.  To date roughly 60 percent of countries of the region have ratified including Argentina, Costa Rica, Barbados, Belize, Brazil, Mexico and Bolivia.

This sends an important signal to the private sector and civil society that these countries support greater action on climate change.

Countries are becoming increasingly aware of the risks presented by climate change. Sea level raise, glacial melt and a reduction in agricultural yields could hit the region’s development prospects hard.

If the international community fails to limit the increase in global average temperature to well below 2 degrees Celsius, the cost of these impacts is likely to be drastically higher than the investment required now to reduce emissions and boost resilience.

Crucially, the region is not starting from scratch: various countries have been developing national climate change strategies, clean energy targets and legislation.

In 2012, Mexico passed a climate change law with targets to reduce emissions by 30 percent by 2020 and 50 percent by 2050. Also that year, Colombia adopted a Low Emission Development Strategy, which led to the launch of the region’s largest electric vehicle taxi fleet and a pilot project for electric buses.

Chile has established a goal of reaching 70 percent of its electricity from renewable sources by 2050. At a time when investment levels in the region’s key mining and hydrocarbons sectors have dropped precipitously, renewable energy represented the most important target of new investment announcements in 2015.

In the build up to the Paris round of negotiations, most countries from the region submitted their Intended Nationally Determined Contributions. The contributions focus on expanding renewable energy, building resilience, forest protection, and clean transport. The process to prepare these plans acted as a catalyst for many to develop or strengthen existing policies and legislation for implementation.

Awareness is also increasing on the need to shift finance flows to sustainable infrastructure and landscapes such as clean transport and forests, which is critical for meeting both the Paris goals and boosting growth, social inclusion and rural development.

In Latin America and the Caribbean, we estimate that up to 5 percent of the region’s GDP or roughly US$250 billion per year will be required to meet future demand for infrastructure meaning decisions taken now could have major implications for implementing the agreement.

At the Inter-American Development Bank we recognize that Latin American and Caribbean are becoming increasingly committed to low carbon development. As a result, last month we announced a new platform called NDC Invest to support countries implement their national climate plans.

One week to save UN #COP22 climate change talks from Trump: https://t.co/4abRdcK9e2 pic.twitter.com/488g6Bg3qA

NDC Invest will provide comprehensive support for countries to transform their national climate commitments into achievable investment plans and mobilize resources for their implementation. Taking into account countries’ unique national circumstances and needs, we will provide bespoke packages through a national-led process.

The platform is a one-stop shop comprised of four principal elements.

Fourth, the NDC Finance Mobilizer will mobilize funding from relevant internal and external sources of finance in support of countries’ priorities. Where necessary this will provide credit enhancement or risk mitigation to reduce costs and other barriers to investments.

The Paris Agreement represents a strategic tool to accelerate a better type of development. The Nationally Determined Contributions can help re-orientate development plans to better respond to citizens’ demands to deliver inclusive and sustainable growth.

Within countries, the integration of NDCs into national development strategies, investment plans and budgets can create the necessary conditions for NDC Invest to flourish.

This will require strong involvement by ministries of finance and planning if the potential opportunities for low carbon and resilient growth are to be realized.

Access to concessional resources, including for capacity building, will help ensure Latin American and Caribbean countries to implement their plans. Developed countries must therefore fulfill their commitments on finance, capacity building and technology transfer to support the low-carbon transition and resilience agenda in developing countries.

By taking strong action now, by mid-century Latin America and the Caribbean could secure sustainable food production, unparalleled biodiversity and highly valued natural capital, sustainable and clean cities and communities that are more resilient to climate impacts and natural disasters.

The region can take advantage of these opportunities and the Inter-American Development Bank Group is ready to partner with others in support of those endeavours.

On Wednesday 16 November from 18:30-20:00 in the Mediterranean Room in the blue zone of COP22, the IDB and the Government of Chile will host an event at COP22 on NDC Invest.