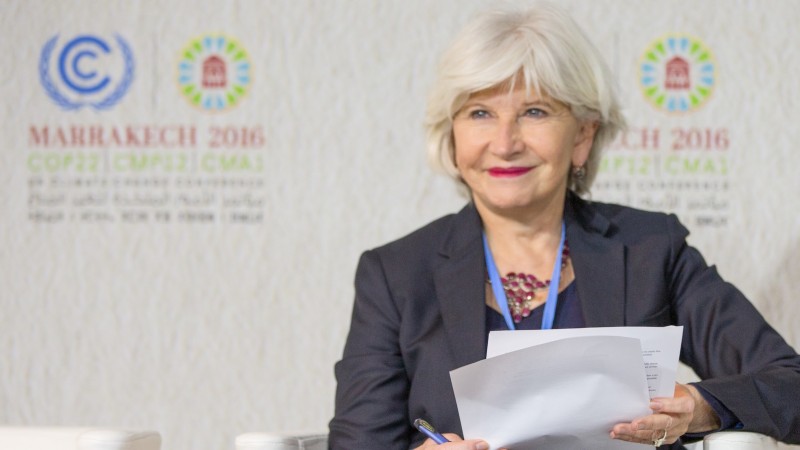 “We need something to emphasise we believe in multilateralism.”

Three days on from Donald Trump’s shock US election vote, Laurence Tubiana is mulling its impact on the UN’s flagship climate agreement.

It’s personal: the French diplomat was one of the key architects of the landmark pact to try and curtail global warming, while Trump has said he wants to scrap it.

Now, sitting in the Moroccan winter sun, munching on a Twix, that moment and the global unity it epitomised seems a distant memory.

As the result became clear early on Wednesday morning Tubiana was left “shocked,” she says, not least because the bronzed billionaire is so unpredictable: “It was like, what does it mean?

“I don’t know if he’s a realist or not. We don’t know who he is. Republicans are very pro-oil, and yet a lot of business that is growing in the US is on the green side.”

Speculation is rife that Trump may stick to his word and pull the US out of the deal. As Climate Home reported earlier this week, that could be a reality as early as January 2018.

With 2016 set to be announced as the hottest on record next week and greenhouse gas emissions showing little sign of decline, a move by the world’s number two polluter to quit would be a disaster.

Tubiana is reluctant to speculate, but points to a coalition of nearly 100 countries that on Friday registered their support for the UN’s climate deal.

Hollande and Germany chancellor Angela Merkel are understood to have talked climate in their initial telephone calls with Trump. Other leaders – perhaps apart from Russia’s Vladimir Putin, she jokes – could do so too.

Report: Climate coalition of 100+ countries urges US to show leadership

In Marrakech China, Saudi Arabia, France, Germany and the High Ambition Coalition of the EU and world’s poorest and most climate vulnerable countries are among those to have reiterated their commitment to the deal.

“You saw already some countries have come out like the High Ambition Coalition – they are working to get more countries… business are preparing statements – but the majority of this exercise has to be done by next week,” she says.

Business leaders are on her hit list in the next 24 hours – she mentions Unilever CEO Paul Polman as one vocal climate champion – to open up a channel of communication to Trump.

“It’s a little early but they have a role. You see in the US press a number of sectors are organising the message,” she says.

“We need next week in part many of these networks and we will have start discussion on what is the good response and who is offering that.

“The most important thing is to get views from heads of state and government hopefully from next week.”

The Moroccan hosts have been busy preparing their own “Marrakech Call” for action in the wake of the vote, drafting a four-page statement for approval by UN member states next week.

The proposal has reportedly unsettled some developing country delegations – fearful its emphasis on global unity airbrushes over a longstanding push for developed nations to lead on carbon cuts – but most support the concept, says Tubiana.

“Many countries were a little sceptical about this call or declaration that the Moroccan presidency has in mind, but now I think everyone they agree it will be important to have this this strong political movement, so I hope this unfolds.”

What’s vital – she argues – is that next week the 190+ countries at the UN send a “simple” but resounding message to the world that they stand by the Paris Agreement.

What’s also clear, Tubiana admits, is that the age of a US administration offering leadership on this issue is drawing to a close for at least four years.

That terrifies many veteran observers of these negotiations, aware of the myriad blocks and traps George W Bush’s negotiating team laid from 2000 to 2008.

Eyes hidden by black Raybans, Tubiana claims she sees instead a “fantastic moment” for the world. “There will be no more US leadership and we have to find one by ourselves .”

Video review: Ed King and Liz Gallagher round up week 1

Many will accuse her of rampant optimism. One “aggressive” emailer already has this week in the wake of the vote, she laughs, stressing the deal she helped create is more resilient than many think.

That’s because in Tubiana’s eyes it was not – unlike previous iterations – simply built on national commitments, but also informed by the interests of city and regional leaders and business.

Paris mayor Anne Hidalgo has already visited the summit to air her views and unveil the launch of a new alliance of 80 mega cities committed to carbon cuts.

Representatives from California’s state government and other US states are expected next week, as are executives from BMW, Facebook and Bank of America Merrill Lynch.

“The concept of Paris was very much we need to operate at all levels, that doesn’t change,” she says. “The concept was working across the climate regime with different actors.

“That was our philosophy to be resilient and ensure it was implemented not because of an MRV [transparency system] but because every bit would move in the same direction.