“Morocco remains and will always remain the prime defender of the Palestinian cause,” said Moroccan foreign minister and COP22 president 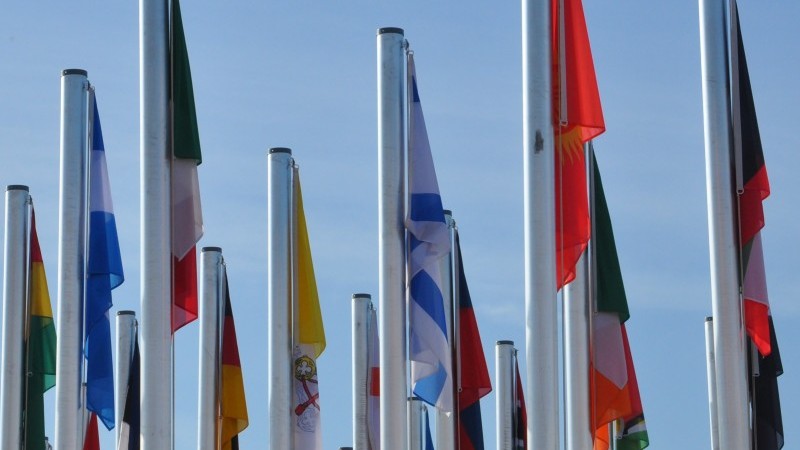 The Israeli flag among others at the entrance of the COP22 climate talks (Photo: Karl Mathiesen)

Morocco’s hosting of climate talks involving Israel has drawn a backlash from a local population that sees the liberation of Palestine as a cause of national importance.

Outside the conference centre in Marrakech, a field of flag poles is guarded around the clock by four armed police.

When asked why no-one is allowed to walk beneath the eight metre tall flagpoles, a guard said it was out of “respect” to all the flags. A journalist with state media told Climate Home that they were watching for attacks on the Israeli flag.

The raising of an Israeli standard on Moroccan soil was a symbol of “normalisation”, said a local NGO in a statement declaiming the “Israeli presence on Moroccan territory”.

The National Working Group for Palestine said it was “opposed to all forms of normalisation [of relations] with Israel under any pretext whatsoever; opposed to the provocation of Moroccans’ feelings and the violation of the nation’s sovereignty and dignity; and opposed to supporting terrorism, criminality and racism,” Middle East Monitor reports.

Guards will not allow anyone to walk beneath the flags – out of “respect”, they said (Photo: Karl Mathiesen)

On Tuesday, the Moroccan foreign minister Salaheddine Mezouar, who is is president of the COP22 climate talks, responded to the criticisms by defending Israel’s right to join the other nations of the world in Marrakech.

“Climate change is a global fight. It is a fight that concerns all of mankind. It is a fight in which all the governments are involved,” he told a press conference.

“Morocco is compliant with the UN rules. There is no politics here. I would like the people who would like to exploit this situation to be reasonable. The fight is elsewhere today,” he said.

But he also had a message for Israel and other critics of Palestine’s involvement at the talks – including the US Republican Party.

“I would like to remind you that Palestine is present in this conference and that Morocco has supported the entry of Palestine as an observer member within the UN,” said Mezouar. “It is a well-known fact it is the first and prime defender of the Palestinian cause and we working in close collaboration with the Palestinians in order to serve this great cause.

“So I consider that Morocco has no lessons to receive from anybody about our commitment to fight and denounce the unacceptable position of Israel… Morocco remains and will always remain the prime defender of the Palestinian cause and we shall always support the Palestinian claims for an independent state and the resolution of this problem once and for all.”

The Israeli delegation did not respond to Climate Home’s request for comment on the minister’s statement. For their part, Palestinian negotiators were unwilling to offer much in the way of a reconciliatory word to Israel.

“No they don’t welcome us and we don’t welcome them,” said Nedal Katbeh-Bader, Palestine’s lead climate negotiator. Although he added: “We are not against them attending.”

Palestine was granted full membership to the United Nations Framework Convention on Climate Change (UNFCCC) at the Paris climate conference last year. It was previously an observer state.

In Palestine, no issue can be detached from the context of the Israeli occupation. So it is with climate change. “The occupation is a multiplier and makes everything much worse,” said Katbeh-Bader.

But the fact of the occupation means that Israel and its supporters are mortified that their contributions to the UN climate process and funding bodies could end up reaching Palestine. Because of this, the US Republican Party platform on which Donald Trump was just handed a mandate specifically promises to pull funding from the UN climate convention and its associated scientific and finance bodies.