Can this woman restore Kenya’s faith in solar power?

Daphin Juma is a freshly trained solar engineer, taking on energy poverty one panel at a time in a country where technical know-how is in short supply 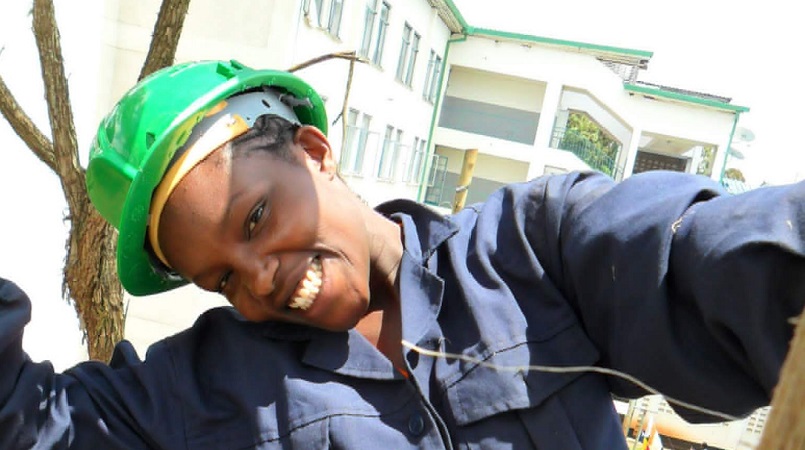 As a child, Daphin Juma would rush home every day at dusk. The Huruma slum in Nairobi was and still is a dangerous place at night.

When the sun goes down, the rest of the city slowly lights up, but pockets of poverty such as the informal settlement where she lived for 16 years stay dark, save for the dull glow of kerosene lamps.

Now a solar engineer and entrepreneur, part of an ambitious program to revolutionise the participation of women in clean energy, Juma doesn’t forget what it feels like to do your homework to the flickering light of a lantern. “I want to make sure that everyone has at least some lighting at home,” she says.

Juma exudes optimism, often interrupting her story with an infectious laughter. Her big dream is to eradicate energy poverty in Kenya through the power of sunshine.

Kenya enjoys over 3,500 hours of sunlight every year, but despite booming energy demand the uptake of solar panels in Kenya remains low.The government’s development plan for the next 20 years foresees solar providing just 1% of the energy mix. For comparison, coal is expected to provide 9% of the total, while geothermal energy will account for 60%.

Researchers have put this down to poverty and general lack of public financial support, but that is only part of the story. Inadequate technical support to the households that choose to go solar is also a barrier.

The Women in Sustainable Energy and Entrepreneurship (WISEE) collective was founded to bring light where Kenya’s national grid doesn’t stretch. In partnership with Strathmore University and USAID, the program offers free training and mentoring for women who wish to start a hands-on career in the sector.

It also addresses a stark gender imbalance in solar engineering. After realising that poorly trained technicians were leading to a proliferation of dangerous and short-lived solar photovoltaic systems, the Kenyan government introduced a compulsory licence. In 2014, out of 257 licensed technicians serving the whole country, only six were women.

Yet in Kenya, women are the main custodians of their home’s energy system. “If something breaks they will be the first family members to be on it while the men are at work, so they should be able to figure out what is wrong,” says Tameezan wa Gathui, a sustainable energy practitioner and co-founder of WISEE.

“When you are a girl child in Kenya your tasks are very much clear cut: household, cooking, fetching water. The boys will help but ultimately they are the ones who get the opportunity to go to school.”

Things are changing and WISEE is expanding the options for women. Over a ten-day crash course, trainees learn to design a solar system according to the specific needs of each customer and troubleshoot it. They get a certificate and additional support if they wish to obtain the licence that will allow them to practice in the field.

We have given women the opportunity to be energy professionals and entreprenuers @JulieGichuru @CarolineMutoko pic.twitter.com/RoZgYugkf1

“Lack of accredited technicians holds back solar penetration in Kenya,” says Izael Da Silva, Director of the Strathmore Energy Research Centre. “The few practitioners around tend to stick to the big urban centres, where it’s easier to do business.”

In rural areas, home to 77% of Kenya’s population, people are wary of buying solar panels without technical back-up. “This is rather obvious,” Da Silva wrote in The Conversation. “Would you buy a car if the closest mechanic was 200km away from you?”

Juma, who after attending the WISEE training ditched a career at a main energy distributor to start her own business, also finds that lack of trust prevents rural Kenyans from embracing PV.

“Top priority of my business model is to restore people’s faith in solar. If you travel in remote areas, so many will just point at a dead solar panel and say ‘solar doesn’t work’,” she says. “But often it’s just a matter of replacing a battery. Perhaps the system was badly designed, or poorly maintained. Nothing that can’t be fixed.”

She plans to launch a “Solar Doctor” project early next year, travelling around rural Kenya to collect and repair solar panels for free. “And when other members of communities realise that solar works, they will be encouraged to try too.”

To fund that service, Juma expects to make a profit from designing and installing solar systems for those who can afford them. She decided to go it alone rather than work for a bigger company because, she says: “If I work for a corporation the solution I offer will be dictated by someone else. Working for myself I can minimise my profits and benefit the customer more.”

The young entrepreneur has had to adjust her ambitions since taking the course 18 months ago, she laughingly admits: “Fresh after the training course, I decided I would install 1MW of capacity by the end of 2017. Well, that was unrealistic, but with my first three clients I am set to install 2kW of solar energy. It’s good to feel that I am moving somewhere.”

For now, Juma’s initiative may be just a drop in the sea, but it is part of a bigger movement that is tackling a key hurdle to the spread of clean energy in Kenya. Fostering a new generation of solar engineers will not only fill a country-wide technical gap, but will also prevent the growth of e-waste, guaranteeing longer life to solar systems and better value for money for the customers.