“Either you are serious, or you are not,” says Saudi Green Climate Fund representative after Korea Exim pulled its application to the fund at the last moment 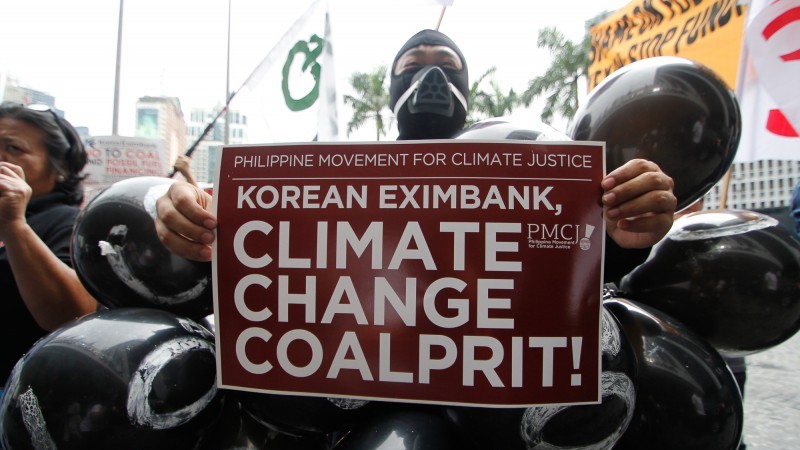 Filipino climate justice activists protest on October 11 in front of the local headquarters of the Export­Import Bank of Korea (KEXIM), in Manila.

The Export-Import Bank of Korea (Korea Exim) has drawn sharp criticism for withdrawing its application to be a conduit for climate funding, days after protests attacked its history of financing coal.

The board of the Green Climate Fund (GCF) was set to decide on Friday whether to accredit the bank. This would have allowed it to oversee projects that will help poor countries cope with the transition demanded by a changing climate.

But on Friday morning, the board of the GCF was told that Korea Exim had asked the board to suspend consideration of the application “for the time being”. The bank did not give a reason for the decision.

The move drew a furious response from the Saudi Arabian representative Ayman Shasly, who felt the organisation’s limited resources had been treated with disdain by the bank.

“I’m very upset, very unhappy. We have spent time and effort at the last board meeting discussing this case and now for no obvious reason I can see the applicant has withdrawn,” he said. “You cannot just play with us, come in and out whenever you want… Either you are serious, you really want to be accredited, or you are not.”

The GCF has US$9.9 billion in funding from rich countries and a growing list of countries clamouring for the cash. But it requires accredited partner to manage the projects.

The accreditation of export credit agencies, such as Korea Exim, has proven to be a controversial issue both inside and outside the GCF.

Several board members, particularly Sweden’s Anders Wallberg, have expressed concern that the parochial motivations of these agencies, which primarily exist to help domestic businesses win overseas contracts, were incompatible with the fund’s supranational vision.

Lidy Nacpil, the regional coordinator of the Asian Peoples Movement on Debt and Development (APMDD), said: “[The bank’s] withdrawal of its GCF application is an important victory for many networks and movements worldwide. But our work is far from over. We want to stop all financing of fossil fuels.”

Earlier this week, climate activists surrounded the bank’s Philippines headquarters in Manila, demanding it stop funding overseas coal projects and that the GCF reject its application.

Korea Exim helped to finance a Korean-operated coal power station in the Philippines city of Naga. During the period 2007-2014, the bank was one of the world’s largest public financiers of coal power.

“The bank is making a mockery of countries like the Philippines that are already suffering from severe climate impacts and could really use the Green Climate Fund for low carbon development as well as to better protect their people,” said Chuck Baclagon, campaigner for 350.org East Asia. “People from the Philippines have shown that it is possible to stop the world’s biggest bankrollers of climate change.”

The withdrawal of the application leaves a question mark hanging over the Green Climate Fund. Korea Exim was seen as a test case of the willingness of the fund to accept export credit agencies. But now their hand will not be forced.

The fund has 191 pending applications for accreditation, but it would not confirm whether there were other export credit agencies amongst them.