Export credit agencies are inappropriate partners for the Green Climate Fund, according to a letter signed by 92 NGOs 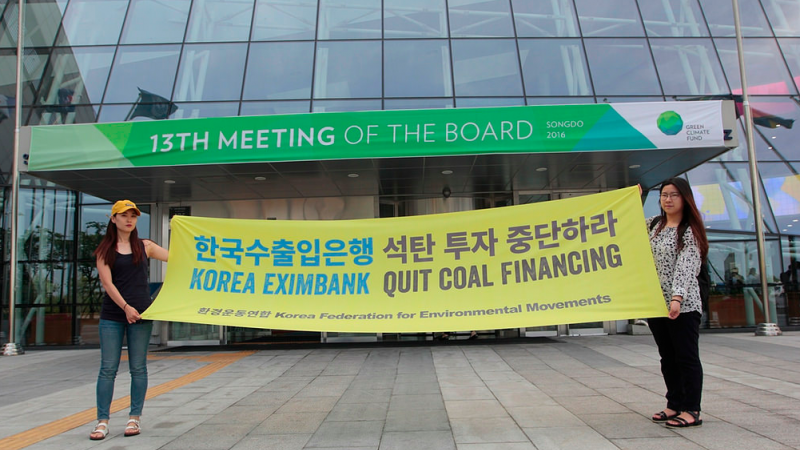 Members of Korea Federation for Environmental Movements picket the last meeting of the Green Climate Fund board in June. Photo: KFEM

Export credit agencies that support coal projects should be banned from receiving money from the UN’s major climate finance body, a coalition of NGOs has said.

The Green Climate Fund (GCF) administers US$9.9 billion, provided by developed countries for projects that will help poor countries cope with climate change.

The fund is still establishing itself and has so far allocated $424.4m. The money is given to accredited entities that oversee the projects – at the moment mostly development banks, UN bodies and large NGOs. The fund’s board will meet next Wednesday to consider prospective new entities.

Some of the applications come from export credit agencies. These are state-owned mechanisms that fund or underwrite overseas projects in which domestic companies are involved, often in developing countries.

A letter signed by 92 green groups from around the world and sent to the board of the fund has called on them to exclude export credit agencies.

“ECAs are meant to promote exports and job creation in the home country rather than the recipient country,” said the letter signed by Oxfam, ActionAid, Friends of the Earth and the Sierra Club, among others.

“Whether from a developed or developing country, their accreditation would thus be inconsistent with – and may be in direct conflict with – the mission and core principles of the GCF, including promoting country ownership, local sustainable development benefits, the efficient use of GCF resources, and the Fund’s international competitive bidding requirements.”

Some countries’ export credit agencies are deeply involved with the coal industry. Between 2007 and 2014, Japan and South Korea supplied $27bn to assist coal projects. One of the major conduits for this coal finance has been Export-Import Bank of Korea (known as Korea Exim), which has been recommended for GCF board approval by the body’s accreditation panel. The Green Climate Fund is headquartered in Korea.

“Though Korea Exim bank made a commitment to ‘green initiatives and sponsorship for sustainable growth’, the Korean government has not moved away from its public financing for coal through Korea Exim bank,” said Jieon Lee, climate and energy coordinator for the Korea Federation for Environmental Movements (KFEM). “Korea’s embrace of coal is inconsistent with its hosting of the Green Climate Fund, aimed at supporting low-carbon development of developing countries.”

At the last GCF board meeting in June, consideration of Korea Exim’s application was postponed. Some board members agreed with green groups that the domestic focus of export credit agencies meant they were inappropriate partners.

Sweden’s representative on the board Anders Wallberg told the meeting in June: “Accrediting an entity that has export promotion would in addition subject the fund to significant reputational risk and we do not believe it would be in the interests of the fund, including the prospects of attracting additional funding. So therefore we cannot agree to this proposal of accrediting the Korean Import Export Bank. And I want to underline that this is a principled position.”

There are 191 applications to be accredited by the fund. A fund spokesperson would not confirm whether there were any other export credit agencies in that pipeline. Campaigners told Climate Home they were concerned about the precedent a Korea Exim accreditation would set.

The GCF board will also choose a new executive director to replace Hela Cheikhrouhou, who stepped down in September.