Sixty countries have joined the Paris Agreement after a New York ceremony, representing 48% of emissions, boosting confidence it will take effect this year 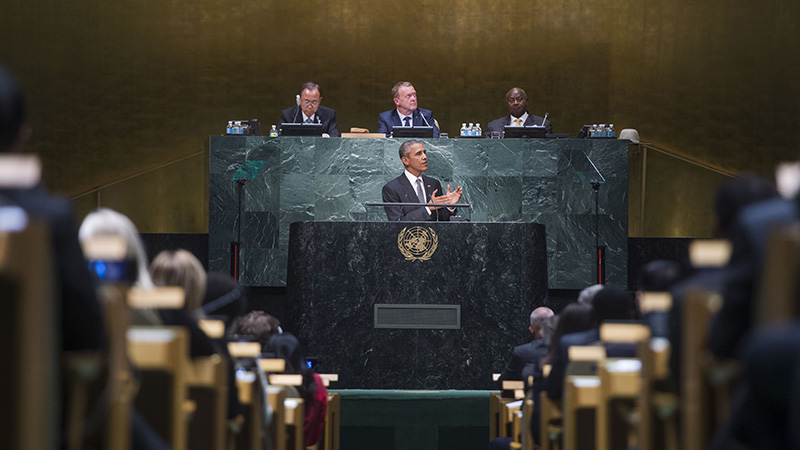 US President Barack Obama addresses the United Nations plenary hall at the summit for the adoption of the post-2015 development agenda (credit: UN photo)

Sixty countries have formally joined the Paris Agreement, passing one of the thresholds for the climate deal’s entry into force. They represent 48% of global greenhouse gas emissions, falling just short of the second threshold of 55%.

Brazil, Morocco and Bangladesh were among a tranche of nations to submit their documents at a special event hosted by Ban Ki-moon at UN headquarters in New York on Wednesday.

Leaders of 13 more recorded video messages pledging to follow in the coming weeks, including the EU, South Korea and New Zealand.

“I am ever more confident that the Paris Agreement will enter into force this year,” said Ban. “What once seemed impossible is now inevitable… This is a major achievement for multilateralism.”

He added: “Let’s work together to make this world environmentally sustainable so that all of us and future generations can live in peace and harmony.”

With the President of Brazil @MichelTemer and members of his delegation. Thanks for ratifying the #ParisAgreement! #UNGA pic.twitter.com/SvW6nOV6xp

It remains to be seen which countries will add the 7% of global emissions needed to take the pact over the finish line.

The EU is seeking political assent from member states to fast-track its ratification, which would add 12% of global emissions. Japan (4%) is likely to pass legislation in its autumn parliamentary session, according to officials. India (4%) and Russia (8%) seem to be in less of a hurry.

Under the Paris Agreement, countries have signed up to hold global warming “well below 2C” from pre-industrial levels and aim for a tougher 1.5C limit. All but a handful have committed to domestic emissions curbs, which will be reviewed every five years to close a gap between action and ambition.

Originally expected to take effect from 2020, the deal was changed at the last minute to allow for it to start earlier. In practice, there are still a number of technical issues to negotiate before it will become functional.

Climate watchers welcomed the signs of urgency, while outlining the struggles still to come.

“Today’s announcement that the Paris Agreement will take effect this year is good news for the planet, and underscores the growing momentum for climate action,” said Alden Meyer of the Union of Concerned Scientists.

“But much work remains ahead on both implementing and raising the ambition of countries’ emissions reduction commitments, if we’re to reach the Paris goal of net zero global warming emissions by mid-century and avoid the worst impacts of climate change.”

Development charity ActionAid singled out the EU for criticism. “European countries’ failure to ratify today is a dent in the climate leadership it has prided itself on previously,” said chief executive Adriano Campolina. “The EU must now swiftly agree to ratification. And in order to reclaim its role as a true climate leader it must take early action, before 2020, to ensure that keeping the world below 1.5 degree warming is not an elusive dream.”

For businesses, entry into force of the Paris Agreement is an “important signal,” said Paul Polman, chief executive of consumer goods giant Unilever. “With this clear direction of travel from political leaders, companies can now accelerate efforts to achieve a zero carbon future.”

There are also more multilateral elements to the climate agenda, noted Liz Gallagher of think tank E3G. “The next test awaits in Rwanda in October, where countries must agree to an ambitious timetable to phase down dangerous greenhouse gases, HFCs.” The Kigali summit is expected to produce an agreement to tackle potent warming agents used in air conditioners and fridges.