China and India are cracking down on excess projects, but remaining pipeline will still blow the 2C carbon budget, say analysts

The volume of coal plants in planning worldwide fell dramatically in the first half of 2016, as China and India tightened up their policies.

That is according to data meticulously gathered by researchers at Coal Swarm from company, media and NGO reporting.

Between January and July, more projects were shelved or cancelled than added, shrinking the pre-construction pipeline by 158GW – a change of 14%, equivalent to the EU’s entire coal power fleet. 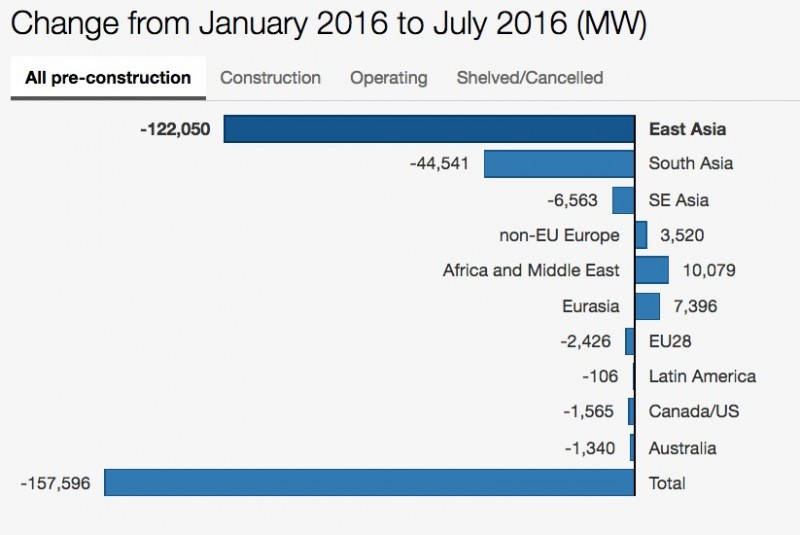 The cooling off follows a landmark climate summit in Paris, where 195 countries agreed last December to phase out greenhouse gas emissions. Coal is the biggest source of emissions from energy worldwide and a prime target for climate policy.

“It is very significant,” Coal Swarm director Ted Nace told Climate Home, although he added the remaining 932GW in the works would still blow the 1.5C and 2C carbon budgets.

Developed countries are already backing away from coal. The US has not broken ground on a new coal plant since 2008, with the exception of a carbon capture and storage pilot.

The major growth market is Asia, which accounts for nine out of ten plants planned worldwide.

Realising this would lead to more power than the economy needed, Beijing called a halt to many projects with guidelines in April. The latest data shows central government has started to rein in development – but has a way to go.

“In the long run, coal-fired power needs to give way to renewables, in order to secure a healthy development of the latter.”

Coal Swarm’s Nace expressed optimism China would get a grip on its overcapacity problem.

“China moves through economic cycles at about four times the speed of everyone else. They are retiring coal plants that are only 20 years old – they build them almost as economic stimulus,” he said.

“Once the national government wins the arm wrestling contest with the provinces, they have the ability to make things happen quickly.”

In India, a surge of developer enthusiasm over the past decade foundered on unreliable or costly coal supplies, inadequate grid infrastructure and grassroots opposition.

The power ministry acknowledged in June that no more plants would be needed for three years. “In the last year, basically the financing has been cut off,” said Nace.

Ben Caldecott, director of the sustainable finance programme at the University of Oxford Smith School, predicts the trend will accelerate.

“The facts on the ground are changing in power markets across the world,” he said. “Competition from renewables, concerns about air pollution and water stress, and the fact that new coal is incompatible with climate change, mean that companies and their investors have to respond to these material risks by cancelling planned projects.”