The dangers of ‘crying wolf’ over Arctic sea ice melt

The melt of the summer sea ice in the Arctic is dramatic.

Each September, when the ice reaches its annual minimum, there used to be around 7.5 million sq km of ice. It is now regularly below 5 million sq km, and hit a record low of 3.6 million sq km in 2012.

This downward trend is projected to continue as global temperatures increase, but somewhat erratically.

The year at which the Arctic first becomes ‘ice-free’ (traditionally defined as 1 million sq km) is much discussed by scientists and the media, but is often a controversial topic.

The IPCC AR5 assessed that the Arctic would likely be ‘reliably ice-free’ (more than 5 consecutive years below 1 million sq km) by mid-21st century, assuming high future emissions, but did not assess the year when it would first be ice free, which would be earlier.

Also, we have seen more ice melt than the models projected so an even earlier date is a distinct possibility.

But, what about this year? I noticed this recent comment in The Guardian by Professor Peter Wadhams:

“Most people expect this year will see a record low in the Arctic’s summer sea-ice cover.”

However, the SIPN team, who collect sea-ice forecasts from 40 international groups, actually have none who think 2016 will be a record low. 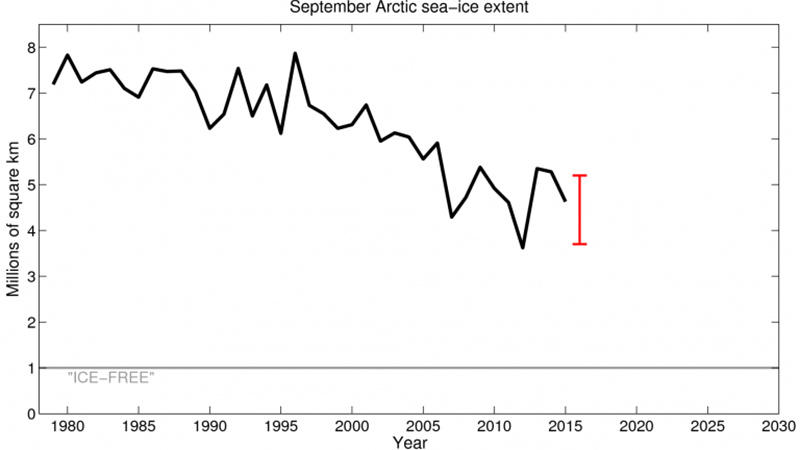 In The Guardian, Professor Wadhams went on to say,

Next year or the year after that, I think it will be free of ice in summer and by that I mean the central Arctic will be ice-free. You will be able to cross over the north pole by ship.

Professor Wadhams has made similar statements before – so should these forecasts be taken seriously?

Firstly, we should all make predictions ahead of time as this tests our physical understanding. Ideally, the methodology used should be clearly documented.

The SIPN project described above has done this in a very open way and I have previously describedinformal efforts for Arctic sea ice forecasts.

Professor Wadhams also submitted a forecast to the SIPN team in June 2015 suggesting that the September ice extent would be 0.98 million sq km, but has yet to publish his methodology, as far as I am aware.

In the end, there was 4.6 million sq km of sea ice in September 2015, the fourth lowest on record.

Why does all this matter?

Such dramatic sea ice forecasts make headlines. They are shared widely around the world. But, our credibility as climate scientists depends on communicating forecasts based on our best physical understanding.

These forecasts may or may not change over time as more evidence accumulates.

If we make predictions that turn out to be incorrect then that should be acknowledged, the reasons understood and our understanding reevaluated*.

There are very serious risks from continued climatic changes and a melting Arctic but we do not serve the public and policy-makers well by exaggerating those risks.

Journalists need to be aware of any past history of forecast successes or failures when writing articles.

We will soon see an ice-free summer in the Arctic but there is a real danger of ‘crying wolf’ and that does not help anyone.

Ed Hawkins is a climate scientist in the National Centre for Atmospheric Science (NCAS) at the University of Reading. IPCC AR5 Contributing Author. Can be found on twitter too: @ed_hawkins. This article first appeared here.