Fifty-seven countries accounting for 59.88% of global emissions have now indicated they will sign agreement before end of 2016 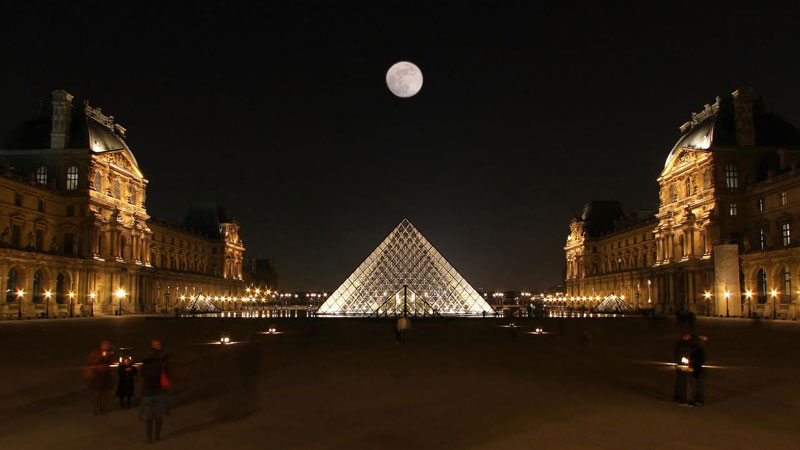 In December 2015, countries met in paris to create a global climate accord. Pic: photophilde/Flickr

The Paris climate agreement will become international law by the end of 2016 if countries stick to the promises they have made.

According to Climate Analytics, 57 countries have now indicated they will ratify or have already ratified the agreement by year’s end. They account for 59.88% of global emissions.

“Under this scenario, the Paris Agreement will enter into force by the end of the year,” said the Berlin-based consultancy.

Announcements made by Japan and New Zealand on Wednesday tipped numbers over the dual requirements for the agreement to enter into force of 55 countries and 55% of emissions. The agreement will be activated 30 days after enough countries have ratified the deal. 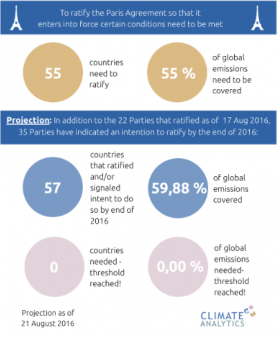 The UN’s new climate chief Patricia Espinosa said on Wednesday that she was “very hopeful” enough parties would follow through on their intentions.

In her first interview since succeeding Christiana Figures in May, the Mexican diplomat laid down a challenge to governments to get on with the task.

So far just 22 states, representing just 1.08% of global greenhouse emissions, have taken this step. Leaders have been invited to attend a special event on September 21 where they will be invited to present their ratification to UN secretary general Ban Ki Moon.

Climate Analytics’ assessment does not include India, which accounts for 4.1% of emissions and is a powerful political force in the talks. India made a joint commitment with the US in June, in which the US committed to ratifying the deal this year, but India’s timeframe was left ambiguous.

Getting ratification is more difficult than a signature: so far 180 countries have signed the deal. Ratification indicates a government has the domestic power to bind their country to the deal, sometimes this requires approval from domestic lawmakers.

If the targets are reached by October 7, the agreement will be in place before countries come together at the next major climate meeting in Morocco in November.

This would also avoid the possibility of a Donald Trump disaster.

If he wins the presidency in November (the election is midway through the UN meeting) Trump has variously promised to “cancel” and “renegotiate” the Paris deal. But once the agreement enters into force, a clause means all countries will be bound to it for four years.

Once the deal was law, the next stage of the fight against climate change will be to hold all governments to the commitments they made in Paris, said Espinosa.

“We need to focus a lot on implementation of the Paris agreement and which translates to the national programmes on climate change for each and every country. We will need to reach out to all those actors – to governments, to civil societies, to businesses – and help in mobilising them to help in this fight against climate change,” she said.

Espinosa was the Mexican foreign minister who chaired the Cancun climate talks in 2010. Many credit these talks with resuscitating a process grown moribund after the Copenhagen talks failed to deliver a consensus the year before. Since then, she said, the climate process had transformed.

“Today, there is not only trust – there is an enormous enthusiasm about participating in this agenda and about being apart about this transformation process,” said Espinosa.

In a wide-ranging interview, she also discussed her personal motivations for taking on the job. She spoke of visiting disaster struck areas in Latin America during her time as foreign minister.

“I could see very clearly how much suffering this causes, really, a lot of suffering that should not happen,” she said. “In many senses the responsibility, the possibility of becoming the UNFCCC executive secretary brings together a lot of these issues for which I’ve worked for all my life.”

It was this sense of responsibility that Espinosa said she would appeal to when asking leaders to make long-term decisions for the global benefit.

“Actually, climate change is really about the wellbeing of people. It is not a very vague concept or a vague problem that is out of our everyday lives. It is actually affecting our everyday lives and this is the fundamental fact that everybody should keep in mind while working toward a low-carbon society.

“We are talking about the lives of people. So having that consideration in mind, it’s a big driver towards more ambitious and urgent action by everybody,” she said.