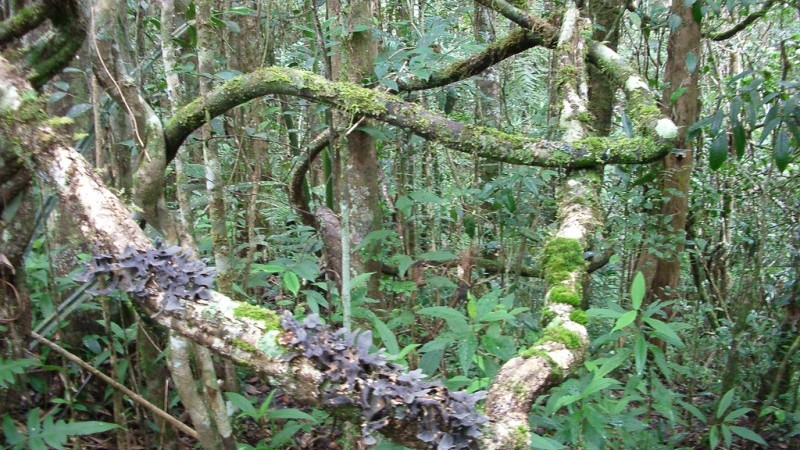 Research by scientists from the UK and Tanzania has revealed that assisted ecological restoration can lead to dramatic increases in growth of new and established trees – helping to mitigate climate change and boost biodiversity.

All that is required, they say, is effective control of lianas, the fast-growing, woody climbing vines that, left to their own devices, quickly take over forest in which most or all of the merchantable timber has been cut, and crowd out emerging tree seedlings.

Trials carried out over five years in Tanzania’s Magombera forest – one of the world’s most threatened habitats – compared tree growth on plots where lianas were left undisturbed with those where they were cut back twice a year.

The results are remarkable, with a 765% increase in net biomass gain on plots where lianas were managed. Crucially, the trials suggest this can be achieved without affecting species diversity.

As a solution to forest degradation, natural regeneration assisted by liana management could be far more effective than tree planting. It produces faster growth rates and the right mix of naturally occurring species – and it can be carried out at a fraction of the cost.

Another potential benefit is that young trees in liana-managed areas appear to be more resilient to the wildfires that often set back regeneration in degraded forest.

The study, published in the African Journal of Ecology, combines results from the Magombera trial with data from other published research on liana management in tropical Africa, South America and Southeast Asia.

It concludes: “Incorporating our data into a first quantitative review of previous studies, we found that tree growth, recruitment and net growth rates were all consistently higher where lianas were either absent or removed.”

It is estimated that up to 60% of remaining tropical forests worldwide have been degraded by logging. Of this, 1.4 billion hectares, or 5.4 million square miles (8.7m km2), have been identified as suitable for restoration.

“We’re talking about a sixfold to sevenfold increase in net biomass, so the implications for global carbon sequestration are potentially profound”

However, without intervention, trees in degraded areas where lianas are established could take hundreds of years to grow because lianas outcompete saplings for light and nutrients, causing reduced growth, sap flow, fecundity, leaf production and survival.

The authors note that assisted ecological restoration has so far been attempted only on a very small scale. They say there is an urgent need to develop landscape-scale restoration techniques that are practical and affordable for economically-disadvantaged nations.

The lead author, Dr Andrew Marshall, senior lecturer in the environment department at the University of York, UK, says that exclusion of lianas during the early stages of regeneration in many logged-over areas could provide the solution.

He told Climate News Network: “No one has until now combined data from all over the world to see what the general trend is. If you combine the results from our study with other research in Panama and Brazil, we’re talking about a sixfold to sevenfold increase in net biomass, so the implications for global carbon sequestration are potentially profound.”

Dr Marshall, who is also director of conservation science at Flamingo Land Zoo in Yorkshire, England, stressed that lianas were an important part of tropical forest ecosystems, acting as a bridge between trees for monkeys and other mammals and helping to enrich forest soil through nutrient recycling.

However, the evidence showed that they were extremely resilient, and that pruning did not affect subsequent growth or species composition.

“We are not advocating that you go out to all the forests in the world, cut all the lianas and wait for the trees to grow back, because that’s going to have a huge impact on the ecosystems,” he said.

“More likely, it’s going to need a more sort of mosaic approach where you can basically manage small areas until the forest comes back, let the lianas regrow, and then go to another area.”

As a strategy for forest regeneration, liana management appears to be far more cost-effective than tree planting.

For the Tanzania experiment, vine stems or branches that obstructed tree seedlings were cut with secateurs, and then cut back again every six months.

It is estimated it would take four people 12 months to manage the seven square mile (11 km2) Magombera Forest, costing US$6,000 a year for labour and equipment – or $5.45 per hectare. In comparison, forest restoration using tree planting in neighbouring Uganda cost $1,200 per hectare.