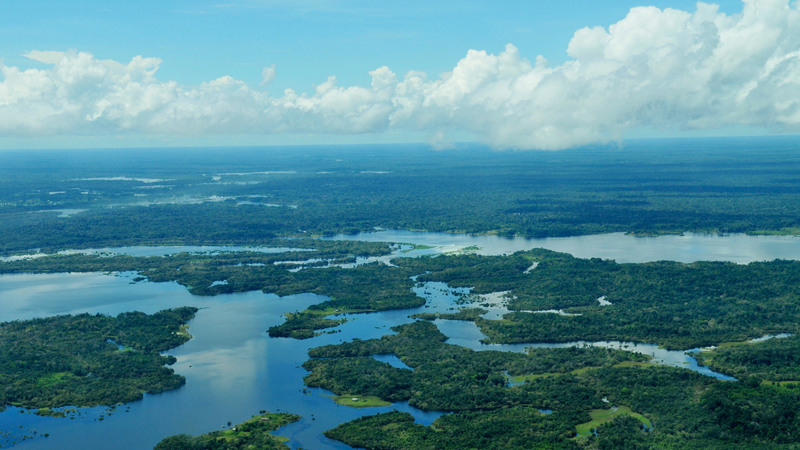 Intense drought across much of Brazil is impacting the country's vast hydropower network (Pic: Flickr/CIFOR/Neil Palmer)

Researchers have confirmed once again that if the Amazon rainforest is one of the planet’s “green lungs”, it may be running short of breath.

Repeated drought and tree loss mean that there is increasing risk that the forest may one day cease to be a “sink” for atmospheric carbon released by the combustion of fossil fuels.

But even as climate scientists shake their heads in distress, plant taxonomists may be holding their heads in despair. They have just been told that so rich and various are the trees of the great Brazilian rainforest that another three centuries may pass before they can all be identified.

Both reports are the product of prolonged and careful study by generations of botanists, ecologists and foresters.

Scientists who monitor the Amazon Basin have for years been pointing out that loss of tree canopy is contributing to imminent climate disaster, and that extreme weather events associated with climate change can only make things worse.

They have also explained that the forest’s role as a carbon sink that right now holds 100 billion tonnes of carbon in the form of roots, wood and foliage is not just threatened.

In a severe and prolonged drought, the forest is actually likely to release more carbon into the atmosphere, to stoke up further warming.

So the latest study, published in Global Biogeochemical Cycles journal is just another confirmation of some alarming portents.

They gathered measurements across nearly 100 locations and observed that, while both severe droughts killed trees, the second of the two slowed the growth rates of the survivors in the years that followed. The implication is that what didn’t kill trees made them weaker.

Study leader Ted Feldpausch, senior lecturer in geography at of the University of Exeter in the UK, says: “The first large-scale, direct demonstration of tropical drought slowing tree growth is extremely important.

“It tells us that climate changes not only increase the rate of loss of carbon dioxide to the atmosphere, by killing trees, but also slow down the rate of uptake.

“And yet the Amazon clearly has resilience, because in the years between the droughts the whole system returned to being a carbon sink, with growth outstripping mortality.”

His co-author, Oliver Phillips, professor in the School of Geography at the University of Leeds in the UK, says that “the Amazon has been providing a tremendous service, taking up hundreds of millions more tonnes of carbon every year in tree growth than it loses through tree death. But both the 2005 and 2010 droughts eliminated those gains.”

Scientists have now been observing measured plots of primary forest in the region for decades, but the sheer richness and variety of the forest remains a puzzle.

An international team of scientists write in Scientific Reports journal that they examined all the tree data from the region – more than half a million inventories made in Amazonia between the years 1707 and 2015 – and began a species count.

Altogether they arrived at a checklist of 11,676 species of tree grouped into 1,225 different genera and 150 families.

But the best estimates of those plant species more than 10cm in thickness at breast height – a rough and ready definition of a tree – in the whole region is now 16,000. That means that around 4,000 species remain to be discovered and identified.

One of the report’s authors, Nigel Pitman, senior conservation ecologist at theField Museum in Chicago, says: “Since 1900, between 50 and 250 new trees have been discovered in the Amazon every year. Our analysis suggests we won’t be done discovering new tree species for three more centuries.”

Research such as this may be essentially academic – it is based on available data assembled in university and research laboratory libraries over centuries – but it has practical value.

People who wish to conserve forests have to begin with a better understanding of why some species are rare and some well-represented, and how the population patterns of tree species change with distance and time.

“We’re trying to give people tools so they are not just labouring in the dark,” says the study’s lead author, Hans ter Steege, biodiversity dynamics group leader at theNaturalis Biodiversity Centre in the Netherlands, who has been mapping the rates of loss in the forest.

“The checklist gives scientists a better idea of what’s actually growing in the Amazon Basin, and that helps conservation efforts.”