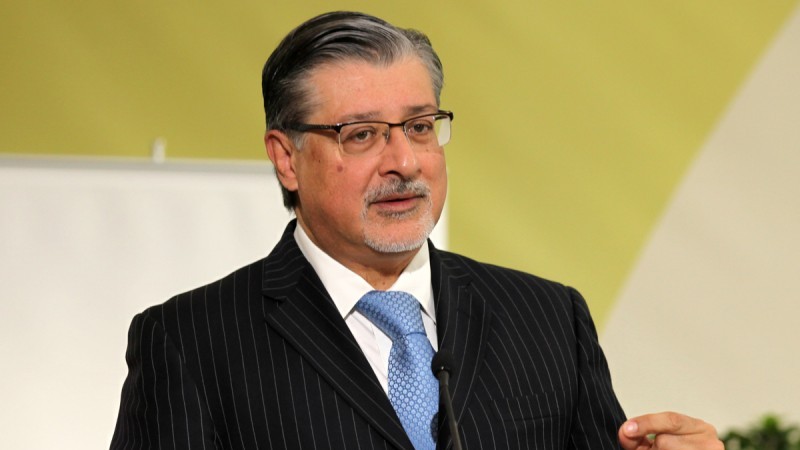 Rip up your clean energy predictions and prepare for a renewables investment explosion.

He reckons that by the time the UN gathers in 2023 to review the clean energy pathways of the 195 countries that backed the Paris Agreement, we will be in a different energy landscape.

“There is fundamental change happening and that trajectory over the last 5 years will continue. We will see a completely different picture in time for the review,” he tells Climate Home.

Amin contends all countries underestimated the potential of clean energy “for various reasons” but points to falling costs as evidence a global transformation is afoot.

Climate Action Tracker projects temperatures will rise to around 2.7C above pre industrial levels. The UN estimates global per capita emissions may fall 4% by 2025 on 2005 levels.

Recent data offers a mixed picture of progress among the developed countries who have committed to reducing their impacts on the world’s climate.

US energy emissions fell to 12% below the country’s preferred 2005 baseline in 2015, due to efficiency standards and a switch from coal to gas.

Carbon pollution from the OECD also fell in 2014 while energy production rose 4%, the club of industrialised nations reported on Tuesday.

In Europe, so long a leader in global climate efforts, emission cuts have stalled. The 28-country-strong bloc saw emissions rise 0.7% in 2015, its data service says.

But while the transition from oil, gas and coal is slow and likely to take decades, it is happening insists Amin.

“The cost of renewables is close to grid parity [with fossil fuels],” he says on the sidelines of a Paris conference organised by French think tank IDDRI.

“There is a huge amount of innovation going on, not just in technology but in policy, investment and utility models.”

Amin points to record low energy auctions across the world in the past 12 months, which have witnessed tumbling prices for solar power.

This year a solar provider in Peru made history offering power at 4.3 cents/kWh, while an 800MW consortium in Dubai is targeting 2.99 c/kWh.

“We may not see 2.99 cents everywhere but this is the direction it’s going,” says Amin.

“The next phase of technology innovations include efficiency and lowering cost of wind and solar, and the other is infrastructure.

“If governments invest in infrastructure that can support renewables at scale, and you have a different picture of how energy transformation can happen.”

Analysis by consultancy EY indicates those investments are happening, notably in middle income countries like Mexico, Morocco and Chile.

“Renewable energy auctions in India, South Africa and Peru all saw bids that fossil generators would struggle to match,” said the report.

Brazil, Egypt and Argentina are among other developing economies EY deems attractive to clean energy investors, while the UK, France and Germany fell in its annual rankings.

Still, it’s one country EY does not list in its top 20 that really excites Amin: oil superpower Saudi Arabia.

Fresh from a recent visit to assess Riyadh’s clean energy plans, the IRENA boss says the imminent float of Saudi Aramco and projected renewables funding could send the sector soaring.

“A decision has to be made in a wider strategic context, but the question is not whether they will but when,” he says.

“Thet gave some of the best estimates for wind and solar power I have seen anywhere – they are prepared for how this will unfold.

“Saudi Aramco’s IPO will be the biggest in history, and what that does to the structure of the industry moving forward will change a lot of things.”

Citing the plummeting costs of solar power in the Middle East he adds: “Why burn oil for power at the cost of $9-10 a barrel? Even if global prices are $40 that’s a $30 margin.”