Can a GIF change the way we think about global warming? 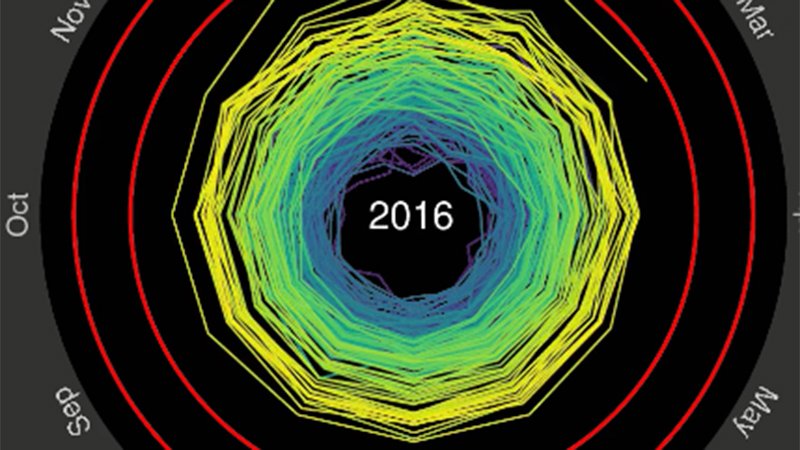 It’s the GIF that keeps giving.

A day after tweeting his representation of global temperatures from 1850 to 2016, climate scientist Ed Hawkins has gone viral.

Like an avalanche gathering pace, Hawkins’ graphic threatens to blow its own boundaries before it stops in March this year, pixels away from a line marking 1.5C warming.

That’s the line you’ll recall was agreed as a new aspirational warming ceiling by 195 countries at the Paris climate talks last December – and one that looks certain to be breached.

Mesmeric yet terrifying, given its implications, the GIF will continue to make waves on the internet for a while yet. But will it change policy?

That’s a question Hoesung Lee, head of the UN’s Intergovernmental Panel on Climate Change, the world’s leading authority on climate change, is grappling with.

Speaking on the sidelines of a sustainable development conference in Paris hosted by French think tank IDDRI, he tells Climate Home digitally smart communication is a priority.

“It’s very important… we have been somewhat criticised in that our reports are not that easy… and therefore we’re going to do a substantial improvement in our reports,” he says.

Communication consultants are coming on board, says Lee, as the IPCC seeks to spread its message beyond the science community and small band of journalists covering the environment.

He seems interested in Hawkins’ work, but appears unmoved as I describe the flickering temperature records on the GIF as they near 1.5C.

This is, after all, what the IPCC has been banging on about for the past decade.

“The IPCC has been showing throughout the fourth and fifth assessment cycles that climate change is occurring right now, affecting ecosystems and we need to take action very urgently,” he says.

Lee appears equally unsurprised when asked about reports that levels of atmospheric carbon dioxide emission are now likely to rise above 400 parts per million, already an historic high.

Australian scientists based in Cape Grim, Tasmania, believe their CO2 readings are now so high they’re unlikely to drop below 400ppm as in previous years.

Those readings, together with reports of the prospect of a record Arctic sea ice low from the US National Snow and Ice Data Center illustrate the impacts already underway.

For Lee, the challenge is to broaden the IPCC’s appeal while not overly simplifying the message, difficult given the vast array of variables climate scientists play with.

While funky GIFs and graphics make a splash on social media, it’s the IPCC’s hard-nosed summaries that are frequently given more credence by governments.

In a time when the Earth seems to be undergoing a profound change, is this the time when the world’s top climate authority tries to address the general public, rather than ruling elites?

“In 8,000 years the earth has never experienced that high of atmospheric concentrations of CO2, so it is a serious matter for the entire global community including the guy on the street,” he says.