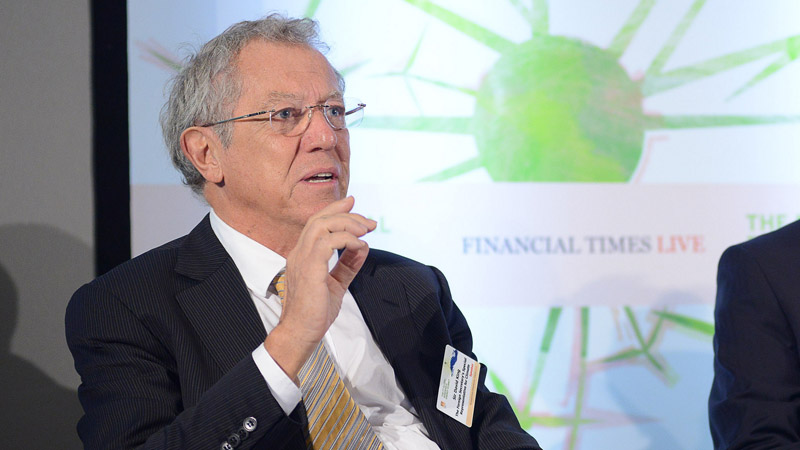 Speaking at a sustainability event in London, Sir David argued innovation to bring down the cost of clean technology would bring swifter results.

“I don’t think it [carbon pricing] is a fast enough driver for change,” he told Climate Home on the sidelines. “It needs to go hand in hand with other regulatory systems.”

His stance contrasts with the priorities of neighbouring France and indeed the UK government’s line within the EU.

Last week, France was among six countries calling for an expansion of carbon pricing to cover half the world’s emissions by 2030.

President Francois Hollande promised to make France a “role model”, charting a path to a price of €100 a tonne. On the EU market, permits trade at €5/t.

The World Bank and IMF champion emissions trading or taxes as the main lever to cut emissions, supported by many large corporations.

Yet Sir David said these mechanisms were unlikely to take effect early enough to hold warming to 2C or 1.5C – the international goal agreed in Paris last December.

“I don’t see India, China or South Africa coming in with a sufficiently high carbon price to drive them off coal,” he said.

Instead, he called for efforts to make clean technology cheap enough to compete with traditional energy sources.

Sir David was one of the architects of Mission Innovation, a commitment by 20 governments to double research funding to $20 billion within five years.

“The point of Mission Innovation is to make sure we have all the technology we need to move away from a fossil fuelled economy,” he said.

“Once you get to the point where the prices are competitive, you no longer really need a carbon price.”

Within the EU, Britain pushed the rollout of emissions trading a decade ago. Sir David said that had helped bring reluctant member states on board with the climate agenda.

He hinted at disagreement with UK lobbying to limit alternative climate policies that might interfere with the market price signal, however.