Finance will be critical to realise the Paris Agreement, says Emmanuel De Guzman – and vulnerable countries are taking a lead 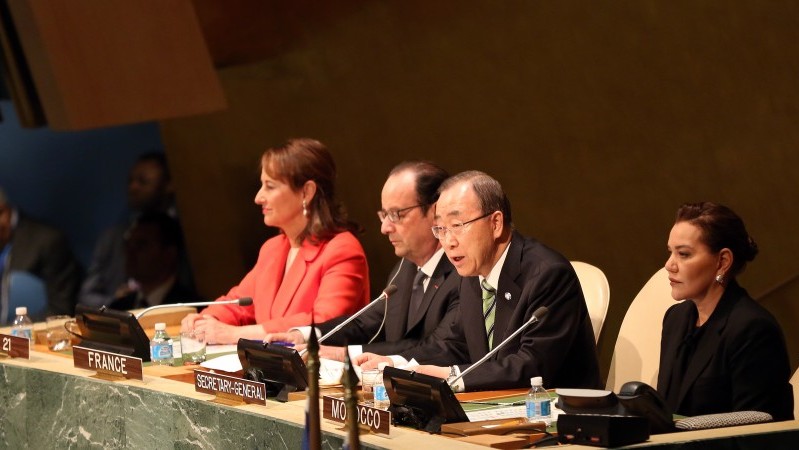 The work is only beginning, but we finally have a framework from Paris to work together to fight climate change.

As with any negotiated outcome, the Paris Agreement is not perfect. But it re-wrote the rulebook when it comes to multilateralism, showing how countries can come together to combat the world’s most complex and pressing crises.  It is up to us all now – all those countries who signed the deal in New York on Friday – to work together so that the Agreement can reach its potential.

One of the key placeholders in this agreement is finance. The total commitments made to date are not enough. Global needs for climate finance to support mitigation and adaptation go far beyond US$100 billion, it must not be re-labelled aid money and it must go equally to adaptation as well as mitigation. Governments must meet their existing commitments –  which we are confident that they consider themselves bound to – and we need the trickle of private investment to turn into a river.

Finance is an area where Paris has changed the nature of the conversation; this issue shouldn’t be seen through the lens of 2009 and the rancour of the Copenhagen climate talks.

We already see major commitments to flows South-South also. China, for instance, has pledged similar multi-billion dollar sums as the US government has behind climate action among developing countries. Vietnam and other members of our Climate Vulnerable Forum are even making modest but meaningful contributions to the Green Climate Fund.

Most developing countries have long been investing domestic resources to fight climate change. This is partly because of slower than hoped-for finance delivery, which should be addressed, but also because investing in building resilience and transforming our energy systems makes good economic sense and delivers better public health, job creation and energy security.

The story of climate finance needs to be understood as the opening up of new, innovative forms of investment, and the creation of new opportunities into which that investment can flow.

At the recent meeting of ministers representing the V20 group of finance ministers of vulnerable countries, we agreed plans to mobilise finance from numerous sources – including through carbon pricing regimes we intend to introduce within the next decade. We acknowledged the role of the private sector in this process, in addition to calling for a Financial Transaction Tax to help finance climate action.

Even as we continue to make the case that countries historically responsible for the climate crisis need to do more on finance, we recognise as well that we have a role to play. The founding 20 economies of the V20 set ourselves the target of mobilising US$20 billion by 2020, from all sources, with partners. If we, the vulnerable, can accomplish this, or even exceed this target, we would demonstrate to the world that by acting together we can mobilise far greater sums too.

The opportunity has never been clearer. The cost of clean, renewable power is falling rapidly. 90% of all installations last year were renewable. Recent tenders in India, Peru, Morocco and Chile have seen developers bidding to develop solar and wind farms more cheaply than fossil fuel plants – without subsidy, and even without accounting for the health and environmental costs of conventional fossil generation.

As clean technologies improve and become cheaper, so too can governments increase the ambition of their climate change commitments. Such increased ambition is vital: the latest assessment suggests that the existing commitments will lead to 3.5C of warming by the end of this century.

Fortunately, the Paris Agreement was drafted with increased ambition in mind and with a clear obligation to marshal our efforts to keep warming within 1.5C.

We don’t doubt the challenges to staying within that limit, but the national pledges made before Paris were never meant to be an end point, merely opening bids. The review process will ensure that governments can respond to more complete climate science, and our ever-improving technological capability to reduce emissions cost-effectively.

For all the challenges involved, for all the details that need elaborating, and the commitments that need restating, it is worth remembering that the world’s most vulnerable countries are voting with their pens. Four of the world’s most climate-exposed countries – Fiji, the Maldives, the Marshall Islands, and Palau – have already ratified the agreement. They recognise it is in their interests to use the building blocks Paris has given us and make the strongest house. The 175 countries that signed in New York include the world’s most vulnerable – the ones who stand to lose all.

It is vital that we work together to fill in the details and make the potential of this agreement tangible to all. Those most vulnerable countries that are at the table today are not naïve; they know there’s a long road to travel. But the momentum behind this agreement, and this will for collective action, can no longer be underestimated.