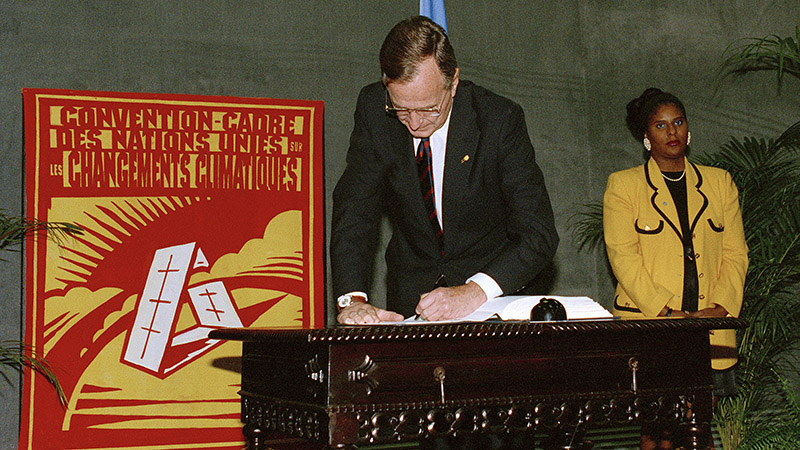 It’s 155 and counting, according to the UN. That’s the number of countries expected to sign up to the Paris Agreement to tackle climate change on Friday.

All major emitters bar Russia are listed as attending, while Kuwait, the United Arab Emirates and Iran will also participate. No word on Saudi Arabia or 2012 UN climate summit hosts Qatar.

Expect a tsunami of announcements this week from countries, companies and civil society. Some may be new, a lot may be repeats of previous commitments. But the intention is clear: to make some noise.

The first of many comes from the World Bank-led Carbon Pricing Leadership Coalition, which welcomes the UK, Colombia, Finland and Cote D’Ivoire as new members, joining the likes of California, Canada, France and Germany.

A statement issued to media speaks of on “orderly transition” away from oil, gas and coal through “removal of fossil fuel subsidies and the use of carbon pricing”.

According to a report released on Friday by the International Emissions Trading Association and the Environmental Defense Fund NGO, 90 countries are now seriously exploring the potential of pricing CO2.

“Market mechanisms are an important tool in the climate change fight, as their inherent flexibility allows environmental goals to be met faster and at lower cost than old-style regulations,” said IETA top dog Dirk Forrister.

Google and giant Indian conglomerate Mahindra & Mahindra are among those expected to announce further investments in clean technologies as a result of a successful Paris Agreement.

“This signing should also be seen in the broader context of other events happening throughout the year in the run up to COP22,” said Mark Kenber, CEO of the Climate Group.

“The next key moment for business leaders and investors will be the Business & Climate Summit, held in London this June, where the real business action continues – now in the context of economic opportunity created by Paris.”

Still, there’s a danger you could read too much into what will be a high-velocity week of climate diplomacy. Here’s the take of PwC director Jonathan Grant:

“Companies I’ve spoken to about the implications of Paris are more focused on putting their pledges into action or analysing potential climate risks to respond to concerns from their board or investors.  Ratification and entry into force are important to maintain momentum, but companies are not waiting for a starting gun before taking action or focused on the development of rules in the next phase of the negotiations.”

Palin first: “We need to keep in mind how important it is for parents to understand this issue and to understand the political agenda behind global warming. It is being used as a fundraiser, it is being used as a partisan issue unfortunately so that parents can be first and foremost in their child’s life and influence them to trust science and believe in science and not leave it to the teachers.” (Guardian)

This week the UN’s International Maritime Organisation meets at its London HQ, with suggestions a new greenhouse gas cutting deal could be on the cards. Reps from the 171 governments signed up to the IMO will discuss a range of environmental concerns. Megan Darby will be there for us this week – here’s some background on the main issues.

Ankara’s energy plans threaten peoples’ health and the country’s economy, says a new report out from the Istanbul Policy Center of the Sabanci University. “Turkey’s energy policy threatens to undermine the objectives of the Paris Agreement on climate change…  Turkey’s greenhouse gas emissions jumped by 110% between 1990 and 2013, making it one of the world’s 20 biggest polluters,” it says. Read the full report here.

Talks in Doha on a pact between some of the world’s top oil producers to limit production are running late as I write [1800 BST]. According to a draft seen by Reuters all OPEC members [which would include Iran] would agree to cap production until 1 October, when they would meet again in Russia to assess the situation. A glut of oil has seen prices crash, placing the economies of major producers under intense pressure.