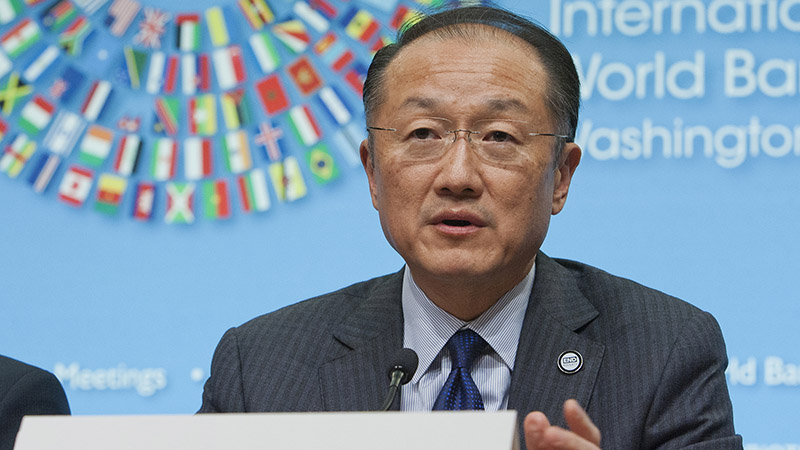 There’s much to discuss as global economic growth continues to slow, but there are likely to be some intriguing climate finance discussions on the sidelines.

Here’s a mini preview from John Roome, the Bank’s new head of climate:

“There is going to be a meeting of the high-level assembly of the Carbon Pricing Leadership Coalition.  Now this is a coalition of countries and companies at the Minister, Head of State or Chief Executive level, that are working together to accelerate the rollout of carbon pricing across companies and countries, and so this high-level assembly will be meeting to set out its work program, for the next 12 months and agreeing on specific activities that will advance the carbon-pricing agenda.

“The second thing is that Jim Kim will be having a flagship dialogue with a number of government leaders, Ségolène Royal from France, Catherine McKenna from Canada, Amina Mohammed from Nigeria, will all be there, and Mark Carney, the Head of the Bank of England, will be there talking about how to accelerate implementation after Paris, and what each of these institutions are doing to move things on the ground.”

Finance ministers from the V20 group of countries deemed exceptionally vulnerable to climate impacts will meet this week in Washington on Thursday to explore how they can develop better financial protection from extreme weather. A ‘risk pooling’  mechanism is once proposal under discussion, along with what the V20 calls a 2020 Action Plan to “mobilize unprecedented investment”.

The UN’s IPCC climate science panel meets from 11-13 April in Nairobi. Top of the agenda is whether it will commission a new report to investigate the impacts of warming up to 1.5C above pre industrial levels – remember that was the *new* target countries agreed to try and limit temperatures to in Paris last December.

Other shortlisted issues up for discussion are cities, oceans and cryosphere, land use, agriculture and when the next IPCC report will be published.

As the 22 April Paris deal signing ceremony nears, expectations are growing that there may be enough support to allow it to become operational this year. That’s pretty rapid – remember it took the Kyoto Protocol about 8 years from signing to ratification from enough countries to bring it into force. 55 countries covering 55% of global emissions are needed; already 130 countries say they will sign the deal, while the US and China intend to officially join by the close of 2016.

A legal note from the UN released late Friday outlines the implications of it coming into force – and here’s the interesting bit.

“Parties to the Agreement will exercise governance, oversight, leadership and decision-making over the Agreement”

That means a bloc like the EU, which is unlikely to get all 28 member states to ratify by the end of 2016, could be excluded from the big decisions. Or maybe not, because later in this masterful piece of UN legalese lines are blurred a little, citing work on the Kyoto Protocol as a precedent:

“Parties to the Convention could make interventions and submit textual proposals on draft texts under consideration. A similar approach could be envisaged in the context of the Paris Agreement and the CMA.”

“Should CMA 1 be convened with a minimal number of Parties to the Paris Agreement, this would result in important decisions concerning the operationalization and implementation of the Agreement being taken by only a small number of Parties. In order to avoid this situation, an option would be to convene CMA 1 in accordance with Article 16, paragraph 6, and then suspend it”

Did you know, Article 28 of the Paris Agreement means any country wishing to withdraw will have to wait for 4 years?  That’s the length of a US presidential term in office (natch). Alister Doyle at Reuters has the story.

The 2016 #supplychain indices will help #assetowners hold their suppliers and advisers to account on #climate #risk. #finance #investment

Lead negotiators will doubtless discuss this and plans for the New York signing ceremony when they meet in the French capital from 15-17 April. France is likely to keep a tight rein on the talks this year, as fears persist over Morocco’s capability to guide negotiations into what officials term the ‘implementation’ stage. Watch out too for the mood music between environment minister Segolene Royal and France’s top climate ambassador Laurence Tubiana, who last week was told she *could* now run for the top position at the UNFCCC.

Ed Hawkins, a climate scientist at University of Reading, offers this innovative take on global temperatures. Little doubt from this which way they are heading.

Global temperatures since 1850 by month pic.twitter.com/DnGXX1prv4

One small step but a lawsuit against fossil fuel companies and the fossil fuel brought by 21 young people and renowned climate scientist James Hansen winning the approval of the federal district court in Eugene, Oregon. In a written ruling Judge Thomas Coffin said:

“Plaintiffs give this debate justiciability by asserting harms that befall or will befall them personally and to a greater extent than older segments of society. It may be that eventually the alleged harms, assuming the correctness of plaintiffs’ analysis of the impacts of global climate change, will befall all of us. But the intractability of the debates before Congress and state legislatures and the alleged valuing of short term economic interest despite the cost to human life, necessitates a need for the courts to evaluate the constitutional parameters of the action or inaction taken by the government.”

The decision will now be reviewed by another judge in Oregon.