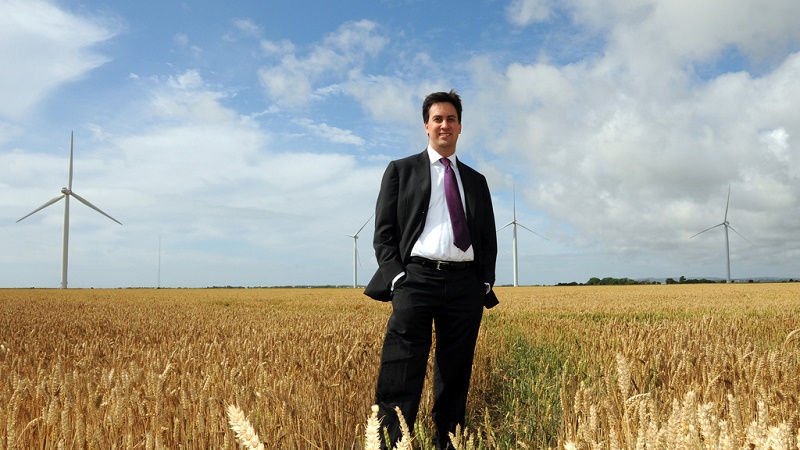 Former leader of the opposition Ed Miliband has unveiled a new coalition of MPs and NGOs that want the UK to adopt a new zero emissions law.

Miliband, Liberal Democrat leader Tim Farron, Green Party MP Caroline Lucas and two Conservative MPs published a letter in the Guardian where they argue the country should “show it’s serious” about the challenge ahead.

“The UK government deserves significant credit for having helped deliver the Paris agreement. Now we urge it to follow up its high ambition internationally, with high ambition here at home. Specifically, it can build on the momentum from Paris by supporting the idea of enshrining net zero emissions in UK domestic law, with the date to be advised by the independent committee on climate change.”

Climate Home understands the Green Party’s Lucas recently wrote to Prime Minister David Cameron asking if he would support tougher carbon cutting measures in light of the 2015 Paris deal, which saw countries agree to limit warming to “well below” 2C and ideally 1.5C.

A reply from Number 10 made it clear Cameron feels he has gone as far as he can, ruling out tougher targets. A new UK climate and energy strategy is due to be published later this year. Last week a briefing note from asset manger Schroders said confidence in the UK energy plans had “evaporated” and it would no longer recommend clients invest in the sector.

A two-week meet that could determine whether the world avoids dangerous levels of climate change kicked off this weekend.

China’s National People’s Congress will this year see the full release of its 13th five-year-plan, a blueprint for the country’s development through 2020.

Opening the parliament on Saturday, Premier Li Keqiang said the government aimed to cap total energy consumption at the equivalent of five billion tonnes of coal a year by 2020, indicating there would be major job losses in the coal and steel sectors.

The world’s top greenhouse gas emitter is in the throes of an economic slowdown and structural shift as it moves away from heavy industry towards a consumption-based economy.

“The shift started to be seen over the last 5-7 years. It will take on a more accelerated step-change in the coming 5 years,” said Manish Bapna, World Resources Institute executive vice president.

“What we’re seeing now with this plan is the intersection of those very public and serious commitments in large part driven by air quality with sober look to change the growth model,” said Kate Gordon, vice chair of climate and sustainable urbanization  at the Paulson Institute.

Have China’s annual carbon dioxide emissions already peaked? We know emissions and coal use fell in 2015, and a new paper from the Grantham Research Institute on Climate Change suggests it’s “quite possible” that they will continue to fall modestly. If they do rise the study’s authors – Fergus Green and Professor Lord Nicholas Stern reckon growth will be “relatively flat”.

That’s potentially huge news from the world’s top greenhouse gas polluter, which has pledged to peak emissions by 2030. “The period 2000–2013, it is now clear, was a distinct and exceptional phase in China’s developmental history, during which the very high levels of greenhouse gases emitted were linked closely with the energy-intensive, heavy industry-based growth model pursued at that time.

“China is currently undergoing another major structural transformation — towards a new development model focused on achieving better quality growth that is more sustainable and inclusive — and it is also grappling with economic challenges associated with the transition.”

The board meet from Tuesday-Thursday in Songdo, South Korea – and they have a packed schedule. Topping the list is the GCF’s ‘strategic plan’, outlining how the Fund will invest and grow in the next year.

The GCF also needs to work out if it can simplify the approval process for projects, Maldives board member Amjad Abdulla told Climate Home. This does not mean projects would escape scrutiny, Abdulla stressed, but lower cost proposals could be fast-tracked, he suggested.

Staffing levels, the selection process for a new executive director and the future of HSBC and Credit Agricole will also be discussed. Both have applied to be partners of the Fund, but civil society activists are not pleased – citing their record in coal investments. “It’s going to be a challenging conversation – there’s a lot of sensitivity,” admitted Abdulla.

The next country to ratify the Paris climate agreement could be the Marshall Islands this week, Climate Home understands.

Investors close in on polluters

A record number of shareholder resolutions have been filed this year with energy companies demanding they explain what their plans for a low carbon world are. 160 have been submitted according to green business group CERES, which points to recent requests for information from ExxonMobil, Chevron and AES Corp among others. “These are a powerful signal the world is shifting to a clean energy, low carbon economy and that fossil fuel companies need to be ready,” said CERES president Mindy Lubber.

“It would be unconscionable for these issues of grave concern for the people of Florida to not be addressed in the upcoming debate you will be hosting in the state,” says a letter from mayors in the sunshine state to CNN, which hosts the latest Republican and Democrat debates in Miami on 9 & 10 March.

Democrat candidates Hillary Clinton and Bernie Sanders have made the issue central to their pitch to votes; but Republican front-runners Marco Rubio, Donald Trump and Ted Cruz have widely dismissed climate science and proposed solutions.

Cholera is on the move

Research from Bath University suggests warming oceans are propelling waterborne bacteria to new areas in Latin America, linked to the El Nino phenomenon and – they write – climate change. “An El Niño event could represent an efficient long-distance ‘biological corridor’, allowing the displacement of marine organisms from distant areas. This process could provide both a periodic and unique source of new pathogens into America with serious implications for the spread and control of disease,” says Craig Baker-Austin from the UK Cefas Weymouth laboratory. Access the study here.