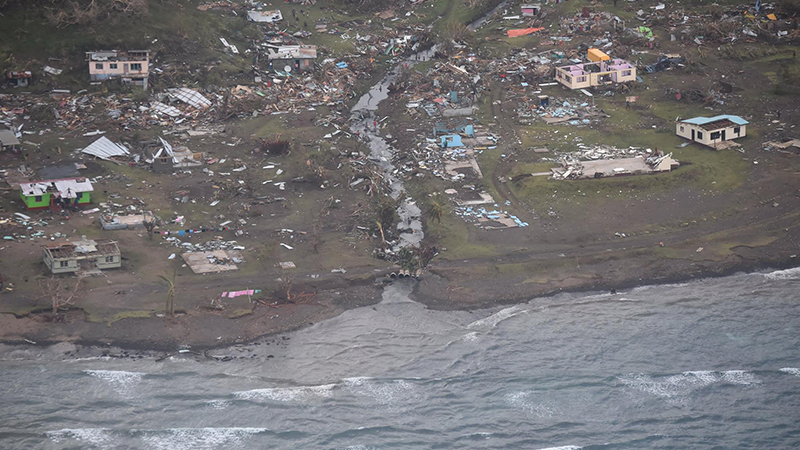 The category-five storm left a trail of destruction from Saturday as winds reaching 180 miles per hour tore through the Pacific archipelago, destroying homes, roads and power lines.

At least 42 people have died, authorities said on Wednesday, with some remote areas yet to be reached.

Fatalities could have been “significantly higher if the Government, the National Disaster Management Centre and the Meteorological Service had not united in their efforts to disseminate warnings,” head of the UN Office for Disaster Risk Reduction (UNISDR), Robert Glasser said on Monday.

Planning systems and a personal appeal by the prime minister ensured Fijians sheltered in over 730 evacuation centres as storm surges battered the islands.

Fiji had “built back better” after cyclone Evan in 2012, said an UNISDR official, which in 2015 launched the global Sendai framework to limit impacts.

“The devastation is terrible, the economic losses will be significant and there is a lot of damage to the housing stock, but the number one target of the global plan for reducing disaster risk is to reduce human losses,” he said.

A climate plan submitted to the UN last year called for funding to help ensure more buildings are cyclone-proof, and suggested a new disaster-management strategy should be completed by the end of 2016.

More than half the country’s 900,000 population were in areas affected by strong winds and rain during Winston, believed to be the country’s most powerful ever cyclone.

A rampant El Nino has stoked extreme weather events around the world, with 92% of natural disasters in 2015 to blame, according to the UN disaster agency. But fatalities from the 90 major storms fell to record lows of 996, compared with the ten-year average of 17,778.

“This is another painful reminder of why global action on climate change is so urgent and vital,” said Emmanuel de Guzman, chair of the Climate Vulnerable Forum, an alliance of 43 countries.

“At just one degree of warming experienced today, vulnerable countries continue to bear the brunt of record breaking storms, flooding and weather extremes.

“We’re expecting all countries to collaborate to safeguard our people by keeping warming to the minimum, which means living up to the 1.5 degrees limit enshrined in the Paris Agreement.”

Last week Fiji became the first country to ratify the Paris deal, which is scheduled to come into effect from 2020.