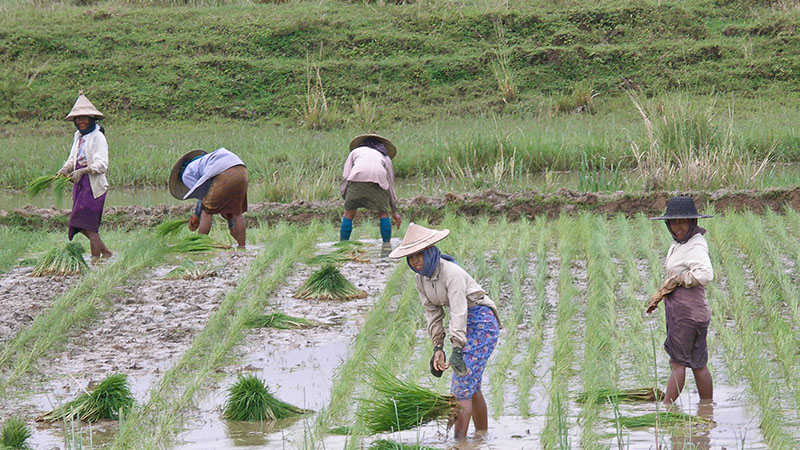 By Kieran Cooke in Myanmar

The boat moves sluggishly up the Ayeyarwaddy, the river formerly known as the Irrawaddy. Every so often it comes to a halt as the ferryman dips a bamboo pole in the shallow waters, checking for sandbanks.

Even though it is the dry season, water levels in the Ayeyarwaddy – Myanmar’s main river, and one of Southeast Asia’s principal waterways – are unusually low.

The ferry is carrying passengers and goods from the ancient temple site of Baganto the city of Mandalay. “The journey is taking longer and longer as the water level keeps dropping,” says the skipper of the creaking, wooden-hulled boat.

“It has been so dry. For the last two years, the monsoon in this area has arrived late and the rains were not enough. Then, when it did rain, it was intense, and more and more sand and earth was washed downriver because the trees are being cut down further north. It makes the journey very difficult.”

A similar story is being heard across much of the region – from the Brahmaputrain Assam in India, west of Myanmar, to the Mekong in Vietnam in the east.

Unusual weather patterns and a lack of rain in many areas in recent years have caused drought and severely damaged crops in what are some of the world’s most fertile areas. When the rains do arrive the dry, caked earth often cannot absorb the water.

Increased runoff, together with the impacts of deforestation and upriver dam building, means river levels rise and fall drastically. A recent report on Myanmar’s forests, which include some of Southeast Asia’s last remaining high-value hardwoods, said they are being cut down at “an unprecedented rate”, with 1.15 million acres (0.46 million hectares) of trees being lost each year.

As happens on the Brahmaputra, whole tracts of land along the Ayeyarwaddy have been subject to what is called sand blasting, where sudden river surges cause vast amounts of sand and soil washed downriver to be dumped on riverside rice paddies, rendering them useless for cultivation.

Report: Food production could increase 40% with better water use

Although overall rainfall levels across Myanmar have shown little decline in recent years, this is not the case in the central “dry zone” round Mandalay, which is home to 25% of the country’s 54 million people. International agencies say levels of malnutrition are increasing in the area as food shortages mount.

Myanmar, for many years virtually cut off from the outside world by an inward-looking military regime, is developing rapidly. Its government is now taking steps to tackle climate change, which it sees as a major problem in the coming years.

Low-lying areas of the Ayeyarwaddy delta, one of the country’s main rice-growing areas, are seen as particularly vulnerable to sea level rise and the devastation brought about by cyclones.

In May 2008, Cyclone Nargis made a direct hit on the delta area, causing one of the world’s biggest disasters in recent times.

According to government figures, more than 84,000 people were killed and more than two million lost their homes. Most international agencies say the death toll was considerably higher.

The then government in Myanmar was severely criticised for its lack of preparedness and inadequate response to the suffering caused by Cyclone Nargis.

A failure to adequately tackle the impacts of climate change could cause severe political problems for the new, civilian-dominated government likely to take power in Myanmar.

The government in neighbouring Thailand – the world’s biggest rice exporter – could also be facing climate change-related problems ahead of elections expected to be held next year.

The main rice-growing region in Thailand is in the country’s north and northeast, where the majority of people in the area – mostly poor farmers – are opposed to what’s seen as a business elite in Bangkok, the capital, and to a military junta in power since a coup in 2014.

The farmers’ anger is growing. They say a severe drought over the last two years and a series of wrongly-applied government agricultural policies are making their lives increasingly difficult.