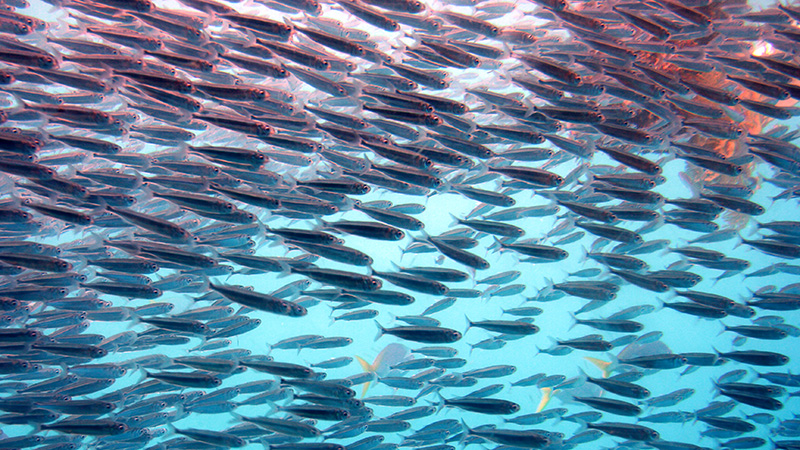 Drink like a fish: A shoal of sardines off the coast of Queensland, Australia (Flickr/robdownunder)

Marine life could become dazed and confused if fossil fuel burning is not reined in, research suggests.

Carbon dioxide emissions that dissolve in the oceans “intoxicate” fish so they can’t spot predators or navigate, warned a study published in journal Nature on Wednesday.

“Essentially, the fish become lost at sea,” explained author Ben McNeil, of the University of New South Wales. “The carbon dioxide affects their brains and they lose their sense of direction and ability to find their way home. They don’t even know where their predators are.”

If atmospheric pollution continues to rise, the study found changing marine chemistry could affect creatures in some hotspots by mid-century. By 2100, up to half the world’s surface oceans will be toxic to their inhabitants.

The researchers drew on a global database with 30 years of seawater readings to study how ocean acidification causes the condition known as hypercapnia.

Neil said the findings were “staggering” and had “massive implications for global fisheries and marine ecosystems around the planet.”

The researchers expect hypercapnia to occur when atmospheric concentrations of CO2 pass 650 parts per million.

The UN science climate panel says that could happen as early as 2050 if carbon emissions continue their unrelenting climb.

Capping warming to the 2C level agreed by 195 countries in Paris last year would stabilise levels at around 550ppm, however.

In 2015, the figure passed 400ppm for the first time in millions of years, as measured by the Mauna Loa Observatory in Hawaii.