Long one of the leading stars and agitators at UN talks, Venezuela’s chief negotiator is perhaps the bellwether for a fair and balanced climate deal 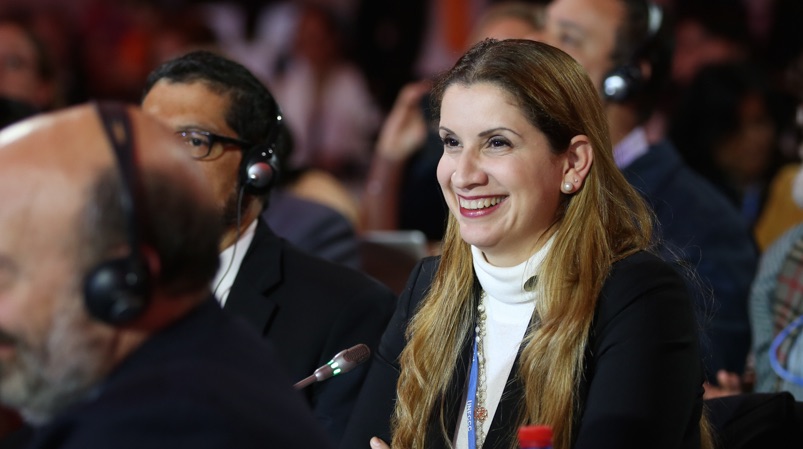 As climate talks turned giddy on Saturday evening before the gavel came down on a Paris agreement, Venezuela sprung its climate plan on an awed debating chamber.

“We support this agreement and have submitted our INDC,” lead envoy Claudia Salerno revealed to huge applause.

After veiled threats to boycott a UN process backed by the ‘intended nationally determined contributions‘ of 186 nations – joining sole refusenik Nicaragua – it marked a sharp contrast to the fraught scenes of Copenhagen in 2009.

Then the firebrand diplomat cut her palm, after repeated calls to be heard went ignored.

“The hand, which is bleeding now, wants to speak, and it has the same right of any of those which you call a representative group of leaders,” she seethed in the Danish capital.

Along with other socialist South American countries, Venezuela refused to sign the deal. Talks broke down into acrimony as trust between rich and poor countries bombed.

Six years on, the country’s endorsement of a new global warming accord is a mark of its broad favour among 195 nations.

“I think we reached a compromise, which is quite a beautiful compromise,” Salerno, who is Caracas’ ambassador to the European Union, told Climate Home on Saturday afternoon at Le Bourget in Paris.

Long an agitator in negotiations along with allies in the ALBA negotiating bloc, the French COP presidency entrusted Salerno with writing the opening segment of the new treaty.

The one-page ‘preamble’ notes the importance of protecting Mother Earth, empowering women and the concept of “climate justice”.

Food security, human rights, migrants and intergenerational equality all got a mention in an unusually colourful opening chapter of a UN treaty.

“It’s going to be quite a revolutionary preamble that will have strong calls for a new revision for climate change as a whole,” she added.

It was a shrewd play by the French to defuse one of the loudest critics of UN negotiations in past rounds.

And it paid off. The agreement was struck, and Venezuela gave it an immediate vote of confidence with its climate plan.

Guillermo Barreto, the minister for eco-socialism had said it would withhold its pledge until it knew what commitments wealthy countries would put in the pact, AP reported.

And that was despite Nicaragua – the only country to withhold a plan (eight more including North Korea and Libya are yet to pledge) – assuring Climate Home that Venezuela would follow suit.

Caracas’ pledge intends to arrest greenhouse gas emissions by 20% by 2030, compared with a business-as-usual scenario.

The oil-dependent economy laid out plans to plant trees, build modern transport systems, and use energy more efficiently. It accounts for 0.48% of world carbon emissions, it says.

Though despite its new-found support, the document blamed capitalist models of consumption and “hegemonic schemes” perpetuated by developed countries.

The UN is the venue for negotiations over “future relations of power based in the use and distribution of energy and natural elements that will shape the hegemonic structures of the future,” it read with bombast.

Yet in a sign of shifting stance, Salerno recognised the biggest polluters and not richest countries should be saddled with more of the burden.

That relates to the blurring of a binary divide in responsibilities based in a 1992 definition of rich and poor. The ALBA group, which includes Bolivia, Cuba and Ecuador, have long campaigned for historic polluters to pay their “climate debt”.

“We are not pointing people for what is the basis of economies, or how rich they are, but actually what we can do collectively to save the world,” Salerno told Climate Home on the sidelines of talks.

“That change of mental dynamics… took a little bit.”

That lines Venezuela up to bear more of the burden if it continues to develop through burning fossil fuels, though oil producers must not be punished without considering the end consumer, she said.

A government rout by the opposition in legislative elections on December 6 could feasibly lead to President Nicolas Maduro losing power before his term ends in 2019, weakening the position of chavista loyalists like Salerno.

Not that it mattered on Saturday. After being told she had never seemed so calm in this setting, she agreed with a flashing smile. “Me neither. I’ve worked a lot to be this relaxed at these talks.”