“I am not choosing between fighting terrorism and fighting global warming. These are both challenges we have to overcome” – France president Francois Hollande at COP21 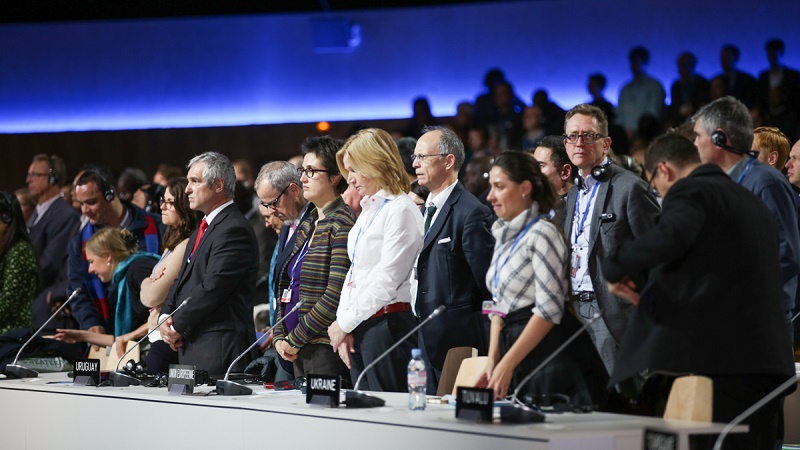 Under grey skies and amid tight security in the French capital, Obama called on countries to target a world “marked not by conflict, but by cooperation; and not by human suffering, but by human progress.”

Xi warned of the twin threats of terrorism and climate change. Together they represented a “huge challenge” he said.

“We should create a future of win-win cooperation,” China’s president added, emphasising the need for richer nations to keep a pledge to deliver $100 billion of climate finance by 2020.

France president and host of the 2015 talks Francois Hollande warned of water wars and increased migration if the COP21 summit failed to deliver a tough pact.

“I am not choosing between fighting terrorism and fighting global warming. These are both challenges we have to overcome,” he said.

Nigeria president Muhammadu Buhari alluded to the ongoing terror threat from Boko Haram in the north of his country, warning European leaders that a heating Sahara could send more militants towards the Mediterranean.

In a strongly worded attack on environmental degradation, British heir to the throne Prince Charles described the climate crisis as “absurd”, calling on governments to stop subsidising fossil fuels and damaging fishing and farming practices.

“In damaging our climate we become the architects of our own destruction. While the planet can survive the scorching of the earth and the rising of the waters, the human race cannot,” he said.

Other leaders offered a more pointed attack at the role of historically wealthy nations in contributing to what are now record-high levels of greenhouse gas emissions.

“Disaster stalks the world” said a gloomy Zimbabwe president Robert Mugabe, citing hunger, disease, destruction and death as some of the possible consequences of a world beyond the 2C danger zone.

“Developed countries are being miserly in providing for means of implementing the convention – but burden us for cleaning up the mess they have created,” he said.

Ecuador’s president Rafael Correa Delgado repeated his call for an “international court of environmental justice” while Bolivia’s Evo Morales said capitalism was firmly to blame for the world’s plight.

“Capitalism has fostered, introduced and driven forward the most savage and destructive formula against out species,” he said.

Few leaders offered more than a broad sketch of what they want to see from a proposed UN carbon slashing deal, which would come into effect from 2020.

Negotiations between the 195 countries taking part in the Paris talks started late on Sunday evening, with a series of meetings known as “contact groups” scheduled to take place throughout Monday.

Earlier on Monday, France foreign minister Laurent Fabius, who is president of the COP21 talks, urged envoys to accelerate their work in order to have a draft deal ready midway through next week.

“We have no hidden agenda and no secrets, and no text in our pockets,” he assured governments, but warned the stakes are now “too high” for any potential collapse of these negotiations.

A slew of financial pledges landed on Monday morning, with 11 developed nations including the UK, US and France committing to replenish a fund to help the world’s poorest adapt to climate impacts with $248 million.

A separate US-led initiative to boost clean tech research and development involving Saudi Arabia, China, India and 16 other countries was announced by Obama. Over five years it will deliver an estimated $20 billion.

Still, civil society groups seemed unconvinced whether the day of goodwill will make much of a difference.

“Don’t think this will be a walk in the park. These are brutal negotiations and it is going to get nasty,” said Oxfam’s Tim Gore.

“We want the voices of the most climate vulnerable to be heard. The deal on the table will not be enough for them… they are like a lizard’s tail and at risk of being sacrificed,” said Mohamed Adow from Christian Aid.

Alden Meyer from the US Union of Concerned Scientists said there was “all to play for” at the talks.

“I’ve been to 20 of the 21 COPs and I don’t think I’ve seen this level of momentum before… President Obama gets it at a very deep level,” he said.

“It’s virtually certain there will be an agreement next week but how effective that is is unclear.”