Marshallese poet Kathy Jetnil-Kijiner explains why she has decided to travel thousands of miles to France, and why she’s not leaving without an ambitious climate deal 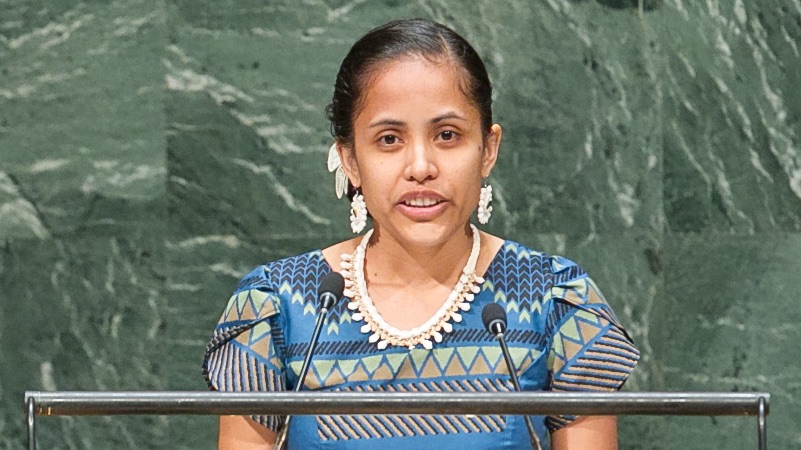 By Kathy Jetnil-Kijiner in Majuro

If you’ve been following my blog you might have seen past posts struggling with this new role I inherited as a “climate change poet” since my performance at the United Nations Climate Summit last September.

All last year I fought with myself as I considered what this role, what these responsibilities, would now mean.

I’ve always embraced my role as a poet – a Marshallese poet, who touched on various forms of activism – but a poet first and foremost.

I used words and writing to understand the world around me, to make sense of my relationships and people – and sometimes this crossed into territories of social justice. But not always. Sometimes I just wanted to capture a feeling on the page.

Last year however, I was suddenly thrust into global conversations on climate change.

I’m not sure how many would understand this struggle. I discussed it a little with my mother – she encouraged me to use the networking platform I was getting to establish a Climate Justice Institute at the College of the Marshall Islands where I teach.

While sniffing around for grants to fund this dream, I continued to incorporate climate change into the curriculum for my students, push them to understand the connections with our nuclear legacy, globalization, colonization, get them talking, thinking.

And between classes I envisioned organizing a monsoon of activist environmentalist youth with my co-director and fellow Pacific Climate Warrior Milañ Loeak.

I resented the salt in the raw wound of discussing climate change, over and over. I resented the photos of each high tide, of each flooding.

I found myself stuck during another king tide, during another flooding a few months ago. I was going to go outside to take the picture, post it to social media.

I asked myself, more than once: Why was I doing this? Why was I stressing myself out, adding even more of a workload onto my schedule? Isn’t it enough to just sit at home with my desk, my laptop, and write and play with my daughter in the sun?

Then – the wake-up call. This summer. A conversation with a fellow radical disrupter focusing on the 2 degrees versus 1.5 degrees debate.

Scientists and climate change specialists have been advocating that we need to lower our carbon emissions so that the world’s temperature doesn’t rise above 2 degrees or catastrophe of the worst kind will hit – think “super droughts, rising seas, mass extinctions.”

Here’s the thing with this very important number. According to those same scientists and reports, while the rest of the world might be safe at 2 degrees, the Marshall Islands and all low-lying atolls will be under water.

The fact that 1.5 is always the afterthought in discussions regarding this simple number, instead of being the bottom line, is the problem.

Doesn’t every life matter? And every country? Why is 2 degrees even considered an option if that would mean low-lying atolls drowning?

This – this is why our island leaders have been pushing for 1.5. Most of the negotiators from larger nations have so far ignored this plea.

Even in a room full of brilliant organizers, I heard 2 degrees thrown around like it was the priority, like the science that has clearly stated that 1.5 would mean the end of all atoll nations meant nothing.

“But don’t you see that you’re gambling with our islands?”

A few months later, and there I was again discussing this simple number over tea and muffins. And my friend tells me, with their experience and research in climate work and the backing of various other reports, that 1.5 is, at this point, un-achievable.

That 2 degrees is as good as it will get. That the science has been calculated and that there is no way we can lower our temperature to 1.5. “It’s not going to stop,” they said. “It’s just going to get worse.”

I was in shock. Perhaps I had been operating under the delusion that things were going to get better, that the work will one day end. Perhaps no one else had ever been so blunt with me.

Either way, I spent the rest of that afternoon in a daze, processing this. I valued my friend’s opinion, and I took it at face value that this meant our islands were as good as gone – that there was nothing we could do to save them.

This was when I reached rock bottom. I’ve never allowed myself, even when I wrote “Tell Them” even after “Dear Matafele Peinam,” – I never really allowed myself to feel the full emotion of what losing our islands would mean.

I skirted around the edge. I dipped in my toes. But I never dove into it. I feared that if I did, that I would drown. That I would never come up.

And I did drown. I sat outside in the sun and I wept. My cries were more than my own cries – I felt my ancestors sitting beside me, weeping with me.

I heard their echoes, reverberating in my sorrow. I felt their/our anguish over our islands, over the next few generations. I felt the shuffling feet of our future generations –  floating adrift, the hopelessness and inability to go on.

This. This was my bottom.

But I dug myself out.

My friend, feeling my loss and agony, opened up a space following our conversation that gave everyone in the room time to breathe, to process the emotional effects that usually accompanies rigorous climate work.

Thanks to them I came to understand that my fears, my questions, my doubts weren’t just mine. They were all of ours. And that it was not too late. That there was still time. That I had to believe.

And so I did. I chose. To believe.

This is why I will be traveling to Paris for COP21, despite the horrific recent attacks.

I will be going to perform alongside four other spoken word artists, each representing the communities of the Philippines, Guam, Samoa, Australia, to perform our poetry and share the stories of our people, to share what has already happened, what’s at stake.

This is also why I’ve prioritized working with our youth, the next generation, as we plan a massive march in the Marshall Islands.

As Nicolas Haeringer, France’s 350 organizer, recently stated, “This movement for climate justice has always also been a movement for peace–a way for people around the world to come together, no matter their background or religion, and fight to protect our common home.”

I’m going because others will not go into that abyss – they skirt around it. They refuse to feel it. Perhaps, understandably, they have more immediate things to worry about.

And that’s ok. I will feel it. Over and over. For them. I will drown the wound in salt. I will do anything to save my islands.

Kathy Jetnil-Kijiner is a poet, journalist and teacher from the Marshall Islands. You can read more of her writings on her website, or follow her on twitter @kathykijiner