Coal: The first casualty of the global climate fight

It’s early days to say that coal is in terminal decline, but the signs are not good. Support will be needed to help communities and countries adapt to a structural decline

Schumpeter recounted a series of revolutions, from the first industrial revolution of 1780-1800, to upheaval in railways, passenger cars and electrical appliances.

Each transition saw, on the one hand, innovation, spending and prosperity, and on the other, “disturbance, losses and unemployment”, for now unfashionable industries.

It is early days to say that coal is in terminal decline, but the signs are not good.

Certainly coal will be the first casualty of a serious global effort to combat climate change, as the highest carbon-emitting source of energy.

Britain’s announcement on Wednesday was illustrative; the first nation to use coal on an industrial scale will phase it out by 2025.

Support will be needed, to adapt to a structural decline, both to help mining communities and avoid a backlash to climate policies.

The industry is in trouble as Chinese imports fall, and traded seaborne prices, now 60% off their peak in February 2011.

Prices have still not found a bottom, according to commodities analysts at BofA Merrill Lynch Global Research (see their chart below), in their “Global Energy Weekly: From bad to ugly for global coal“, published on Monday. 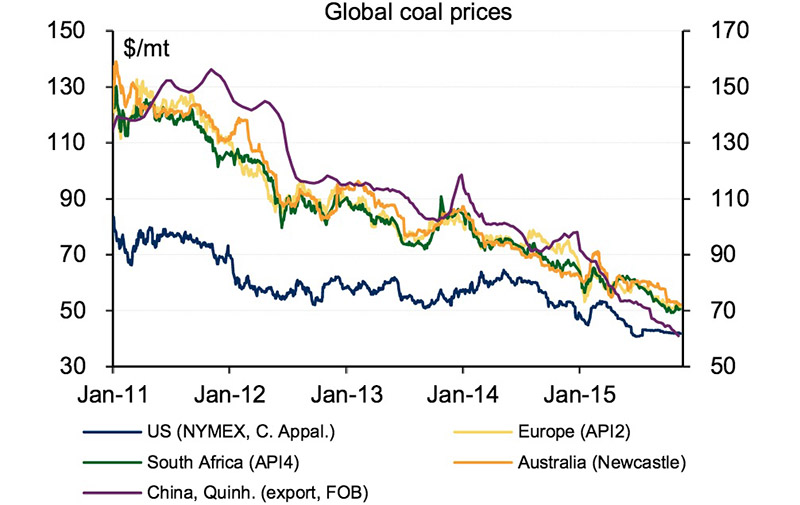 The problem is first and foremost China.

Incredibly, China’s thermal power generation (from burning fossil fuels, as opposed to nuclear, hydro and other renewable energy) is in outright decline this year (see chart  below), as a result of ailing manufacturing, air pollution laws and emissions caps in some provinces. 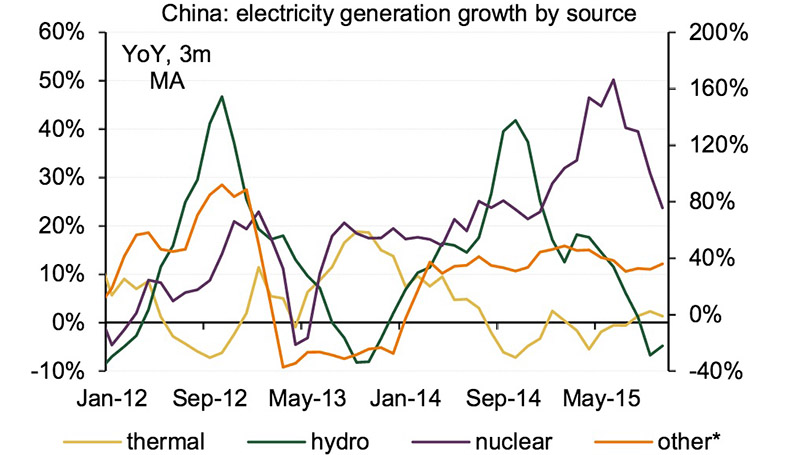 BofAML follows a report by Greenpeace, which has been timely and accurate in the past, suggesting last week that global coal consumption would see its biggest ever fall this year, by as much as 2-5%.

Naturally, this is a cause for celebration for environmental groups worried about the impact of coal on the climate and wider environment. But it is equally important to consider the impact of a decline on mining communities.

The intervention of Hilary Clinton last week seemed an attempt to get on the front foot against Republican accusations of a “war on coal”. Clinton proposed $30 billion in federal investment to re-skill coal mining communities and to boost infrastructure.

The large costs of aiding losers in an industrial transition can be balanced by reinvestment into high growth industries.

According to the New Climate Economy report, Better Growth Better Climate, published last year: “Countries that have a record of proactively managing change and easing the costs of transition will do better and experience less resistance to reforms.”

“Various policies can ensure a just transition for workers. They can take many forms but should minimise unemployment, promote job creation in growing sectors and tackle labour market distortions efficiently, while also providing protection for the most vulnerable.”

They gave the example of Poland, whose closure of inefficient mines from 1998-2002 cost around 1 billion euros in severance payments, retraining programmes and social benefits, but helped the industry turn around a net loss of $1.5 billion in 1998 to net profits of near $1 billion in 2004.

Such programmes may increasingly target diversification out of all fossil fuels, over time.

They will need to lower resistance to climate policies, where Exhibit A is the biggest spoiler historically at UN climate talks: Saudi Arabia.