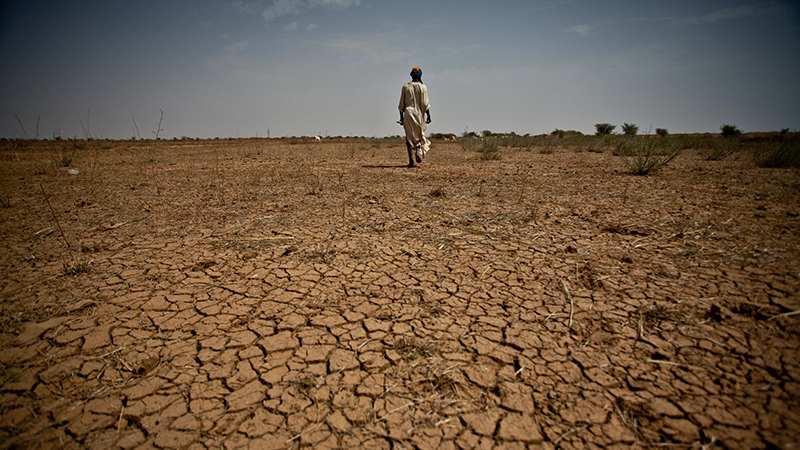 Arid soils in Mauritania in 2012. Across West Africa, 12 million were affected when crops failed and the region underwent food shortages (Flickr/ Oxfam International)

The UN’s desertification body has agreed to keep constant the stock of the planet’s healthy soil within 15 years.

Envoys from 195 nations committed to target “land degradation neutrality” at the close of an Ankara summit on Friday, which officials called a “breakthrough”.

The UNCCD estimates restoring the carbon storage capacity of land could reduce global warming by 0.5C by the end of the century.

It is a first step in meeting a newly-launched international development goal to combat desertification and restore denuded land and soil.

Some 12 million hectares are lost a year affecting 1.5 billion people, according to the Bonn, Germany-based body.

“For a very long time, we have left the land – our Queen – vulnerable,” said UNCCD chief Monique Barbut, comparing it to the important chess piece.

“By adopting Land Degradation Neutrality as an organising principle, you have given us a clear game-plan and vision and direction for the future.”

Conserving land is intertwined with biodiversity, climate change, migration and security, she said.

Report: Fighting desertification will reduce the costs of climate change
UN drought chief: ‘Famine dehumanises us, but it is not a fate’

The UN says $2 billion a year is needed to fund the target.

Donations from Turkey of $5 million and $3 million from the Global Environment Facility jump-start the process, but a huge funding gap remains.

As the global population swells to 11 billion by 2100 with two-thirds crowding into cities, preserving land will be a colossal challenge.

Lindsay Stringer, a professor at Leeds University welcomed the target after years of talks “batting back and forth with procedural matters”.

It could play into debates about how land can adapt to and mitigate climate change at a Paris summit in December, she told Climate Home, after attending the Ankara summit.

But obstacles remain. The definition of what qualifies as degraded land was “vague”, plus countries need to stump up cash to make good on pledges, she added.

Countries agreed a set of indicators to measure progress, but the UN’s Barbut urged work to be done to make them “workable and appropriate”.

At the summit, envoys succeeded in widening the UN body’s remit beyond drylands. That was despite resistance from Latin American countries with large extensions of Amazon rainforest.

The declaration will be presented at a UN climate change summit in December.