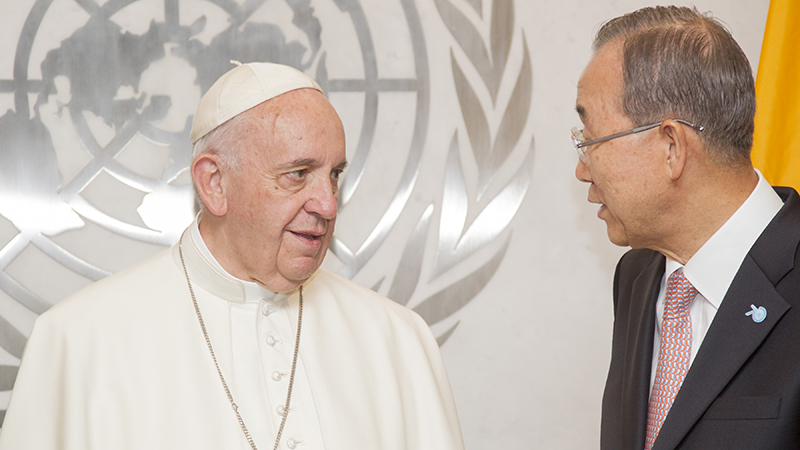 UN chief Ban Ki-moon said the world had chosen a “life of dignity and prosperity for the health of the planet” on Friday by ratifying 17 international goals that seek to end extreme poverty and hunger.

“Billions of young people must use the goals to transform the world. We will do that through partnership and commitment. We must leave nobody behind,” Ban told reporters in New York, after 193 UN member states green-lighted the Sustainable Development Goals.

The set of voluntary targets and indicators will be expected to shape the agenda and policies of governments over the next 15 years.

Analysis: Why should you care about the Sustainable Development Goals?

It came as Pope Francis addressed the UN on the world’s commitment to fight poverty, end social exclusion and declared a “right to the environment”, which mankind had no authority to abuse.

Ban said this generation could be the first to end extreme poverty and hunger, and the last with the power to stop climate change.

The South Korean diplomat hailed the feat as the “most inclusive process in UN history,” with some 8.5 million people consulted on the drafting process, which officials laboured over for three years.

The president of the UN’s general assembly, Mogens Lykketoft called on governments to define how they will implement the post-2015 development agenda. A summit will be held in April to iron out details, he said.

Critics say trillions of dollars are needed to carry out the visionary package, and say they are overoptimistic in making their vision reality.

“We can do this if we want to do it,” Lykketoft said, taking questions for Ban.

A warming planet is set to lead to a rise in extreme weather, like droughts and storms. Goal number 13 calls to take urgent action to stop global warming.

The Overseas Development Institute, a London think tank, said 720 million may fall back into extreme poverty unless greenhouse gas emissions peak in 2030, and fall to near zero by 2100.