It is in the interests of oil-rich Saudi Arabia and United Arab Emirates to back global action on climate change, study shows 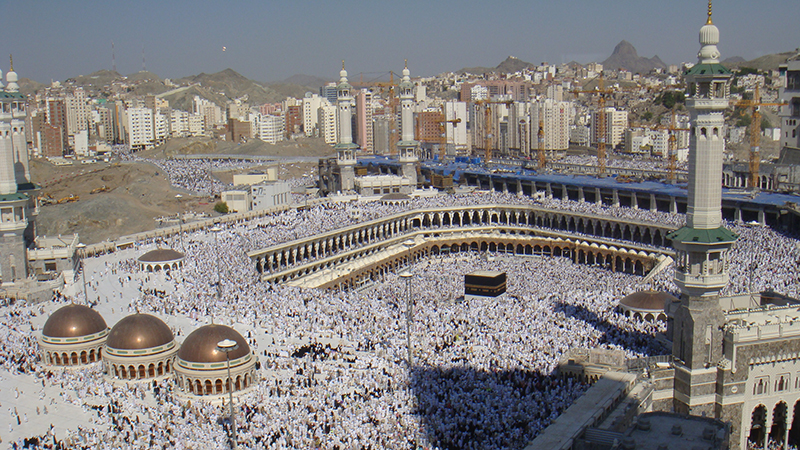 Al-Haram Mosque at the start of Hajj in 2008. Millions of Muslims who make the annual pilgrimage to Mecca in Saudi Arabia and spends hours outdoors praying, could be exposed to ‘intolerable’ heat stress by 2100 (Flickr/ Al Jazeera English)

The Persian Gulf could be exposed to catastrophic temperatures by the end of the century if emissions of greenhouse gases follow current trends, US scientists said on Monday.

A mix of severe heat and humidity in the region would push temperatures past a “critical threshold” where the body overheats as sweat cannot evaporate, according to the study published in journal Nature.

Under such conditions, the cities of Doha and Dubai and parts of Saudi Arabia would become unbearable without air conditioning. The findings have particular implications for the two million Muslims who pray from sunrise to sunset at the Hajj ritual in Saudi Arabia.

The oil-rich countries in the region have tended to drag their feet on climate action, fearing the impact on their major source of revenue. Only two Gulf states have submitted carbon-cutting pledges to the UN, behind deadline.

These findings show it is in the governments’ interests to back greenhouse gas emissions cuts worldwide, the researchers argued.

“Countries in the region have an interest in supporting mitigation measures that would tend to basically help reduce the concentration of CO2 in the future,” said Elfatih Eltahir, a professor at the Massachusetts Institute of Technology.

A build-up of extreme conditions every few decades would cause “wet-bulb temperatures” to reach 35C over a period of six hours, they said. That’s equivalent to a temperature of 48C with 45% humidity, or 38C with 100% humidity.

Deadly heatwaves in Europe in 2003 which saw an estimated 15,000 premature deaths would seem like “refreshing” conditions in comparison,  co-author Jeremy Pal at Loyola Marymount University in California told a reporters’ briefing.

Countries which surround the Persian Gulf – Iran, Iraq, Saudi Arabia, Qatar, Bahrain, United Arab Emirates and Oman – are particularly affected by the clear-sky conditions and high humidity arising from the stretch of water.

At present, wet-bulb temperatures rise to a maximum 31C for just a few days a year, the scientists said. 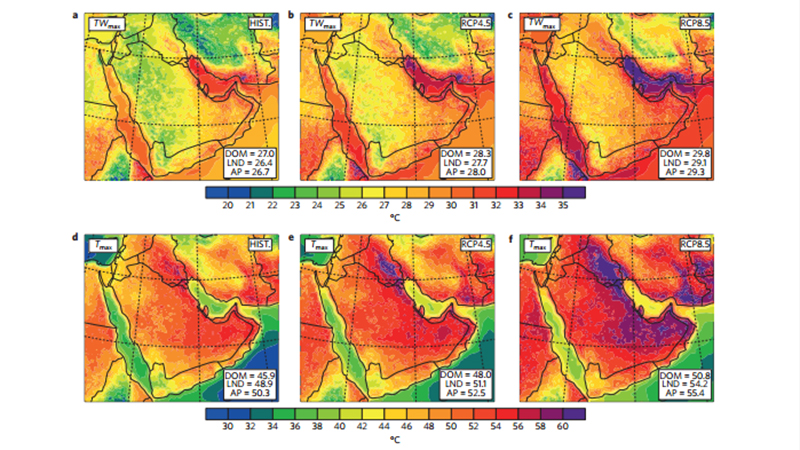 The bouts of heat would hit productivity, stopping construction, fishing and support activity for oil and gas rigs in the Gulf.

That is under the assumption global warming follows the business-as-usual scenario outlined by the UN climate science panel, RCP 8.5, with temperatures rising an average of 4-6C from pre-industrial levels by 2100. Mitigation or RCP 4.5 projects warming of about 3C.

Carbon-cutting pledges submitted by over 150 countries towards a new global warming treaty would limit warming to 2.7-3.5C, according to more recent analyses.

Of the Gulf states, only Oman and the United Arab Emirates have so far provided domestic climate plans. OPEC nations including Saudi Arabia and Iran, the top carbon polluters yet to present a pledge, will deliver before the Paris summit, Reuters reported.

Oman offered a 2% cut in greenhouse gases below forecasts of emissions growth by 2030. The UAE did not set an emissions target at all, but said it would get a quarter of its energy needs from clean sources by 2021.

National pledges will form the basis of a UN climate deal to be finalised in Paris this December.