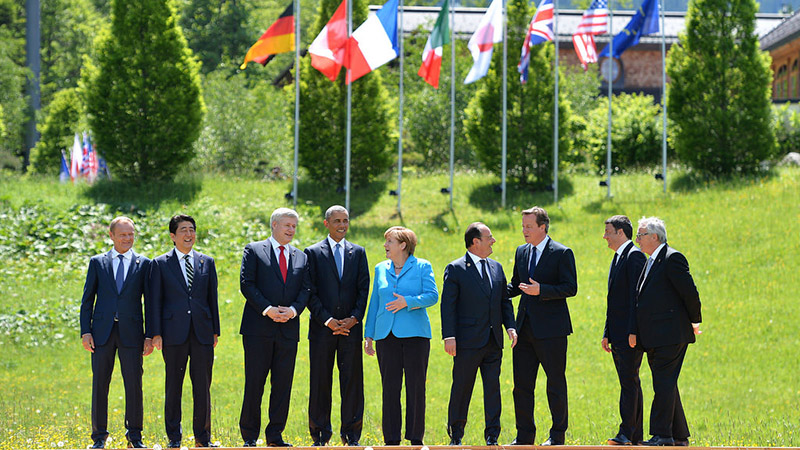 The Group of Seven (G7) saw a clear swing away from its reliance on the high-polluting fuel between 2009 and 2014, according to a report by UK-based think tank E3G on Wednesday.

Though that’s with one exception: Japan.

As others slim their coal fleets, the Asian member is planning 48 new plants and approving export credits to fund other carbon-intensive ventures in the developing world.

“Japan finds itself isolated in clinging to coal, while its G7 peers are all moving towards a phase out,” Chris Littlecott, E3G programme leader, said in a statement.

“There is a clear structural shift away from coal underway across the G7, with the dominant trend being the cancellation of proposed projects and the retirement of existing coal power plants.” 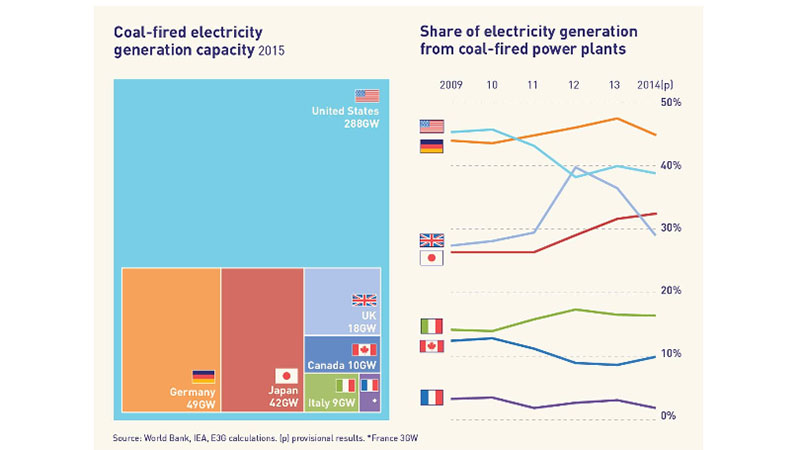 The think tank ranked the country in bottom place as it launched the report at a preparatory UN meeting to a decisive climate summit in Paris in December.

Japan has upped its coal use to generate power after the Fukushima nuclear disaster shut down the nation’s reactors. But environment minister Yoshio Mochizuki is pushing back on concerns over greenhouse gas emissions, Reuters reported in August.

“[Japan] should stop arguing that so-called ‘clean coal’ is the solution,” said Kimiko Hirata, international director of NGO coalition, Kiko Network. “Recognizing global momentum, Japan should shift away from its current path, not only for the sake of a climate-safe world, but also to avoid international isolation and to foster a green economy in Japan.”

Internationally, coal is in the crosshairs as national climate commitments and air pollution fears are driving a switch to cleaner fuels, while collapsing coal prices are driving many producers to the wall

In the G7, developers have scrapped half of proposed projects since 2010 worth 133 gigawatts in new capacity over fears for profits.

Countries have marked out 124GW for retirement by 2020 moreover, which the report expects to grow. 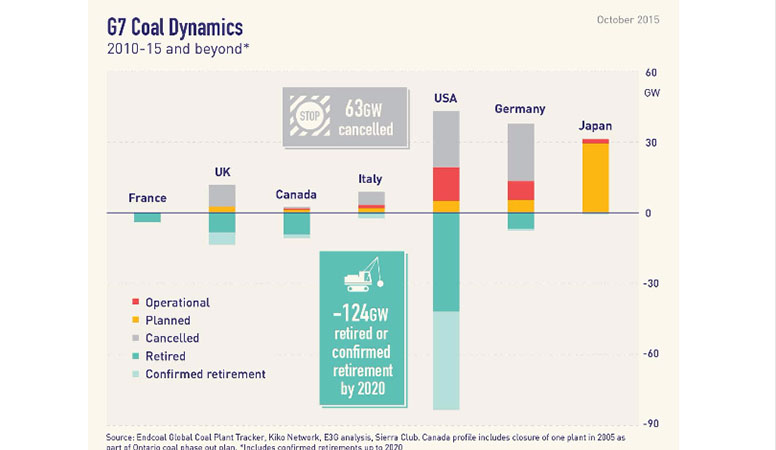 The G7 made a watershed commitment to transform the world’s energy system towards 100% clean energy by the end of the century, spelling the end for the industry, in theory.

Canada, the US and UK now refuse to build coal plants without costly and untested technology to capture carbon emissions.

While sagging prices has made new mining ventures unattractive for producers in France, Italy and Germany, the report said.

Though Germany, which E3G ranked sixth out of seven in the scorecard, still backs coal plants abroad and had supported lignite plants after abandoning nuclear energy.

Those plants had racked up financial losses and faced an uncertain future after 2020, for which utilities and investors required a clear signal, said Sabrina Schulz.

The US, with a coal fleet twice the size of other G7 members combined, was praised for retiring coal plants and withdrawing support for new ones overseas without carbon-capture technology.

Though the G7 represented just 22.4% of global emissions in 2012, according to EU data.

Developing countries fixed on poverty reduction are ramping up coal power as a cheap source of electricity.

2,177 were in the planning stages according to a March report by Coal Swarm. With average lifespans of 40 years, that locks in a whole lot more carbon-intensive development that cooks the planet.