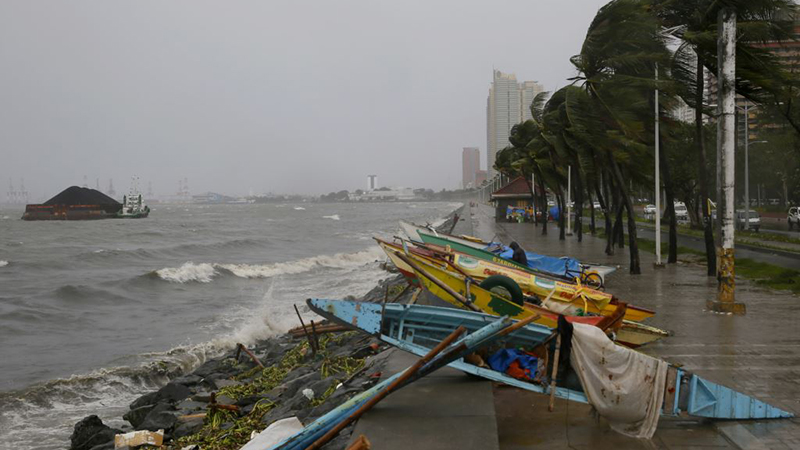 Typhoon Koppu made landfall near the town of Casiguran on the island of Luzon on Sunday morning, bringing winds of close to 200km/h (124mph) (Flickr/ Share GK)

A powerful typhoon battering the Philippines is “further evidence” of the urgency to craft a robust global warming pact, the chair of a group of threatened islands has said.

The last round of interim talks before a Paris summit has got off to a rocky start following discontent over the latest draft of a negotiating text.

Thoriq Ibrahim, the Maldives’ environment minister and chief of the alliance of small island states (AOSIS), raised the super-storm before a heated opening session on Monday.

“As if further evidence was needed to illustrate the urgency of the climate crisis, we begin talks as yet another devastating storm churns over the Philippines,” he said in a statement.

Typhoon Koppu has so far killed three people and caused 23,000 to flee their homes on the island group of Luzon, according to disaster agency officials, ABC News Australia reported. Officials predict the situation will worse as flood waters rise.

With all the rain, flooding is inevitable – this is Rizal in eastern Luzon #LandoPH #Koppu – the waters are rising pic.twitter.com/YBGQshuErC

Hurricane Joaquin, which destroyed homes and crops on the Caribbean islands of the Bahamas last week, and the third global incidence of coral bleaching on record, displayed the need to act said Ibrahim.

Countries must commit to lowering a threshold to avoid dangerous warming from 2C to 1.5C, agree compensation for those affected and stump up finance to address climate impacts, he urged.

“We are staring at a once-in-a-generation opportunity to tackle climate change in Paris.

“But a final agreement is by no means assured and recent history makes it clear that success will require compromise, yes, but one that reflects the views of all parties—especially the most vulnerable.”

For its part, the Phillipines made a coded call for climate compensation in its national submission to the deal last month.