US freezing out potent HFCs with fresh curbs 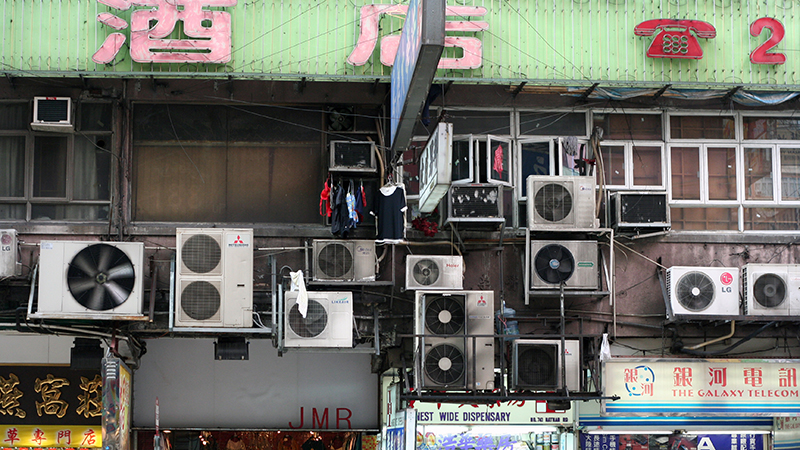 Air conditioning units hang from the side of a building in Hong Kong. Their growing use is intensifying global warming (Flickr/ Niall Kennedy)

President Barack Obama moved to phase out HFC greenhouse gases on Thursday in a suite of new commitments as he burnished his climate leadership.

The US navy’s newest warships will bear greener fridges and air conditioning, while over a dozen corporations including Dow and Honeywell vowed to scale up climate-friendly substitutes to the highly potent gases, the White House said.

The move is intended to spur a breakthrough at a Montreal Protocol gathering in Dubai next month, which targets a global phasedown of HFCs.

That could avoid the equivalent of up to 100 billion tonnes of carbon dioxide by 2050 and 0.5C warming by 2100, according to the Institute for Governance and Sustainable Development (IGSD).

President Obama was “walking the walk” in cutting HFCs which were “essential” for his legacy-defining assault on climate change, said IGSD head Durwood Zaelke.

The president had won the support of key players China, India and Brazil, noted Zaelke, in scrapping the factory-made chemicals which are up to 10,000 times more potent than carbon dioxide.

Building on US measures announced last September, the actions will help slash global consumption of the greenhouse gases equivalent to removing 210 million vehicles off the road for a year.

Without action, HFC emissions are expected to triple in the US by 2030.

Several Gulf countries have opposed action on the super-pollutants, worried alternatives won’t be sufficient coolants in their hot climate.

A recent report by a US laboratory suggested that concern was misplaced.

“Oak Ridge and their advisors proved once and for all that next-generation room air conditioning technology can help protect the climate and clean the air in even the hottest climates,” said IGSD’s Stephen Andersen.

Delegates meet in Dubai from 1 November for the Montreal Protocol’s next session, ahead of a decisive climate conference a month later in France.