Developing countries cry foul ahead of week of negotiations in Germany – claiming finance, loss and damage have been wiped from draft deal 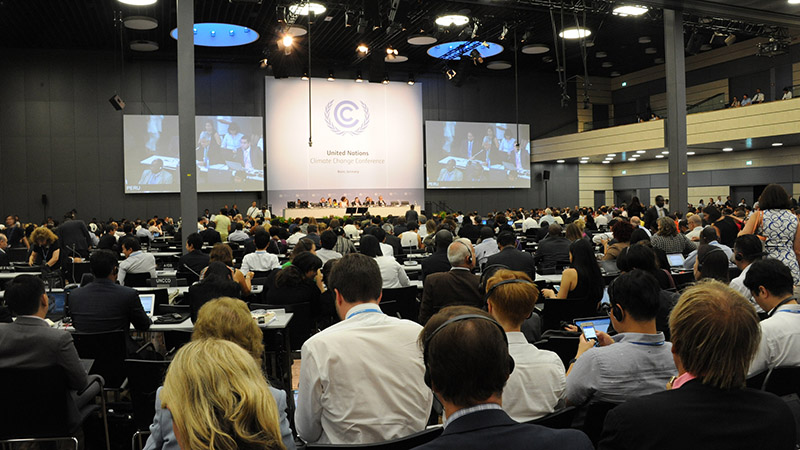 India’s climate chief could not have been clearer: “I am not happy with the text. We should certainly have a different text for the Paris to become success.”

In an interview with the Times of India this week, Prakash Javadekar piled into a draft document published by the UN that could form the basis of a global climate change agreement.

It was disappointing, he wanted changes, India would soon offer new suggestions. If it had been a boxing match the text’s corner would have thrown in the towel after round 1.

Javadekar’s blast sets the tone for what is sure to be a lively 5-day set of climate negotiations in Bonn next week, the last chance for technical progress before December’s UN summit in Paris.

-Finance: no predictability or adequacy
-Loss and damage: just notes the problem
-Long term goal: no mention of decarbonisation
-Mitigation cycles: when will these happen?
-How binding will the national commitments be?

Envoys arrive to discuss a revised set of proposals that was slashed from 85 to 20 pages by the two officials chairing these talks, and published at the start of October.

The two chairs – Algerian Ahmed Djoglaf and US official Dan Reifsnyder – distilled the legion of suggestions in the original behemoth at the request of the 190+ governments at the talks.

But it has left many unhappy and not just India.

“This … text cannot be it. We must improve it. Next session in Bonn will be crucial. The EU and many others will work hard to improve it,” tweeted EU climate chief Miguel Arias Canete.

“A proposal on loss and damage by 134 countries gets ignored in the draft global agreement on climate change,” he said – again on twitter.

Most countries will “love or hate it” says Liz Gallagher, a climate diplomacy analyst at the E3G think tank who follows these negotiations closely.

The structure of the agreement is there, says Mohamed Adow of Christian Aid, citing references in the new text to finance, regular reviews, carbon cuts and adaptation.

But he contends it is missing key details, such as specifics on climate finance contributions from rich to poor countries and how regular reviews of emission cuts would work.

The latter are deemed essential, since the 150 national climate plans sent to the UN will not limit warming to below 2C.

“It’s like a cardboard house: from afar it looks solid, with lots of enticing activity happening in each room but when you get up close, you realise the windows are painted on and the whole thing is likely to fall over,” he says.

Square brackets indicate language that has yet to be agreed.

Envoys will start working through these heavily bracketed paragraphs line-by-line on Monday, provided there are no fireworks in the opening session.

Many developing countries under the vast G77 + China bloc will be upset that reams of suggestions they had inserted into the UN draft text earlier this year have gone, says Oxfam’s Jan Kowalzig.

He suspects the chairs deliberately took a chainsaw to the original document, which grew rapidly from a February set of talks in Geneva into an 85-page beast by the summer.

“Maybe they did it deliberately to force countries to focus in the core essentials they need in this treaty, maybe it is a strategy” he says.

If it is a cunning plan by Djoglaf and Reifsnyder then it’s high risk.

Kowalzig expects countries will accept their work as the basis for moving forward, but it could be a feisty opening session.

And he’s certain some of that initial anger will focus on what is, he said, a weak proposal on helping vulnerable countries cope with loss and damage caused by climate-related events.

An original formula crafted by developed countries called for a loss and damage mechanism to be part of a core Paris deal, and suggested the creation of new displacement facility to help communities made homeless by extreme weather.

The re-jigged plan is thinner and loses these details:“It is a joke, and it just recognises there is a problem, but it doesn’t lead to any actions,” says Kowalzig.