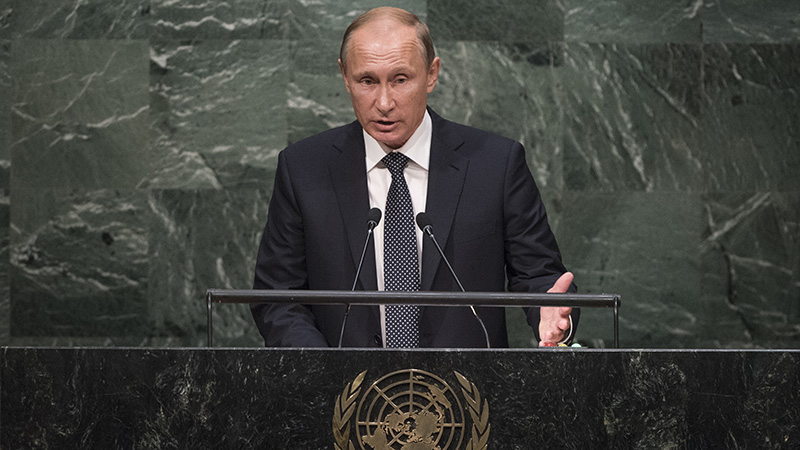 Vladimir Putin’s first speech at the United Nations in over a decade ended on a cryptic offer to host a climate change forum.

Moscow was ready to co-sponsor an event to tackle depleting natural resources, habitat destruction and climate change, the Russian president said in a widely-anticipated podium address on Monday.

Putin hinted current plans to rein in greenhouse gas emissions were faltering and advocated a change of tack, with little detail on what that would entail.

“We might defuse the problem for a while for a while by setting quotas on harmful emissions… but we need a completely different approach. New technologies inspired by nature,” the former KGB officer told the plenary hall in New York.

Putin moves into a climate change section without having made many waves on Syria and Ukraine. Long on rhetoric, short on specifics. #UNGA

The intervention is surprising as Moscow has been quiet on the climate debate in recent years, showing little interest in the global deal due to be signed at a December summit in Paris.

Analysis: Ahead of Paris, Russia becomes a climate policy wallflower

The country was one of the first to put forward its national plan in March, where it pledged to cut greenhouse gas emissions 25-30% on 1990 levels by 2030.

If the full sweep of its forests were taken into account, it could reduce its greenhouse gases by as much as 75%, it said.

Critics said the pledge was vague and full of loopholes.