Updates as leader of Catholic church addresses top US lawmakers and warns of need to address poverty, global warming 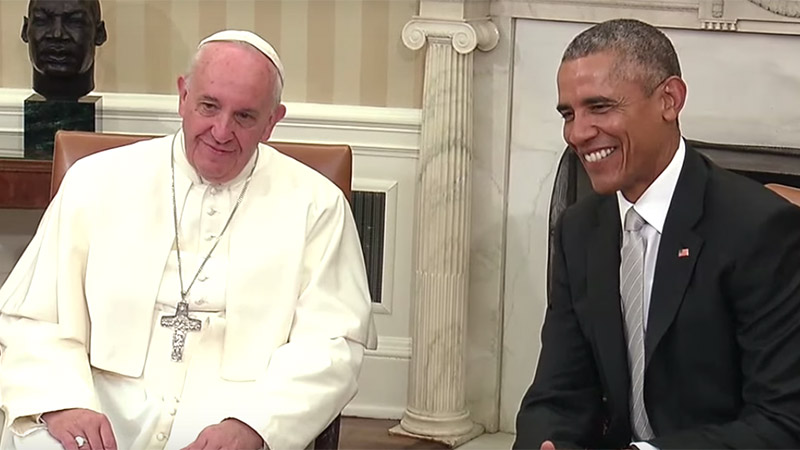 By Alex Pashley in London

1629 BST: The Pope’s motorcade sets off and with that we wrap up.

The Pope was uncompromising as expected. The arms trade, the death penalty, the essence of political leadership, the refugee crisis and climate change were all touched on.

Climate change’s inclusion was brief, but its pinning to human activity won’t please sceptical voices in the US Congress.

Biden, caught on open mic with pope on speaker’s balcony. “They love you. And we love you.”

NOW: Pope speaks to crowds from Speaker’s Balcony at the U.S. Capitol. “I am so grateful for your presence here” pic.twitter.com/83NPcwra48 — CNBC Now (@CNBCnow) September 24, 2015

1613 BST: This one is far shorter. He asks: “If there any of you who do not believe or cannot pray, I ask you please, send good wishes my way.” Boehner appears to crying, overwhelmed by the emotion of it all. Pope departs the balcony.

1609 BST: Now he speaks in Spanish, with an English translation following. Biden and Boehner are by his side.

1607 BST: The Pope appears from a high balcony to address crowds shouting “Father” below. This is the second part of his historic address.

1603 BST: So to recap: What did he say on climate? The Pope invoked June’s encyclical in his take on creation and distribution of wealth, and its impact on the world’s resources. Business is a “noble vocation” and “fruitful source of prosperity” especially if it sees job creation as an “essential part of its service to the common good.” Though it requires an important “conversation” on the environmental challenge to our common home. The next chunk is key:

In Laudato Si’, I call for a courageous and responsible effort to “redirect our steps”, and to avert the most serious effects of the environmental deterioration caused by human activity. I am convinced that we can make a difference and I have no doubt that the United States – and this Congress – have an important role to play. Now is the time for courageous actions and strategies, aimed at implementing a “culture of care” and “an integrated approach to combating poverty, restoring dignity to the excluded, and at the same time protecting nature”

We should deploy technology “at the service of another type of progress, one which is healthier, more human, more social, more integral”. America’s universities can make a “vital contribution” in the future he continued.

1559 BST: Ever the provocative figure, some of the Pope’s historic intervention must have rattled more conservative lawmakers. He now is expected to address huge crowds outside on Capitol Hill.

1556 BST: The Pope repeats yesterday’s parting line on White House lawn with ‘God bless America’ to a standing Congress. The speech spanning 45 minutes touched on many topics from global refugee crisis, the family, a call to abolish the death penalty, to a brief segue into climate change.

1546 BST: “It is my duty to build bridges.” Pope is broaching on US-Cuban normalisation of relations.

1543 BST: Human activity leading to deterioration of our common home. US and Congress have a role to play. “I am implementing a culture of care and integrated approach to combating poverty restoring dignity to the excluded and at the same time protecting nature.”

1540 BST: Here it comes on climate – “We need a conversation which includes everyone since the environmental challenge we are undergoing and its human roots, concern and affect us all.” Biden claps, Boehner doesn’t.

1535 BST: Advocates against death penalty. “Every life is sacred.” Mooted response from a Congress packed with lawmakers from states that retain capital punishment. Some clap, others sit on their hands.

1533 BST: A message of humility and forgiveness so far. No mention of conserving the planet.

1532 BST: First standing ovation as Pope reminds of the “golden rule: do onto others as you will have them do onto you.”

1530 BST: “Our world is facing a refugee crisis of a magnitude not seen since the second world war. This presents us with great challenges and many hard decisions.”

1525 BST: Pope invokes civil rights march of Martin Luther King from Selma to Montgomery. “That dream continues to inspire us all and I am happy that America continues to be for many a land of dreams.”

1524 BST: We must sacrifice particular interests for the common good.

1521 BST: Pope says we must move forward together in renewed spirit of fraternity and solidarity to take on world problems

1519 BST: Pope stands up for freedom: religious and intellectual

1514 BST: Outside Capitol Hill huge crowds have gathered to hear the Pope speak… he’ll address them once he has finished inside.

1511 BST: Pope Francis today says he wishes to dialogue with the “many thousands of men and women who strive each day to do a honest day’s work, to bring home the daily bread to save money, and one step at a time, to build a better life for their families.”

1506 BST: Wide applause for the Pope from all in the house as he gets down to starting speech.

“I am most grateful for the invitation to address this joint session of congress in the land of the free and the home of the brave.”

1500 BST: We’re running a little late, but this is the Pope. I guess he’s allowed a few minutes to get ready. Secretary of state John Kerry has just wandered in – he’s a devout Catholic and is leading US efforts to address climate change, making this address personal. 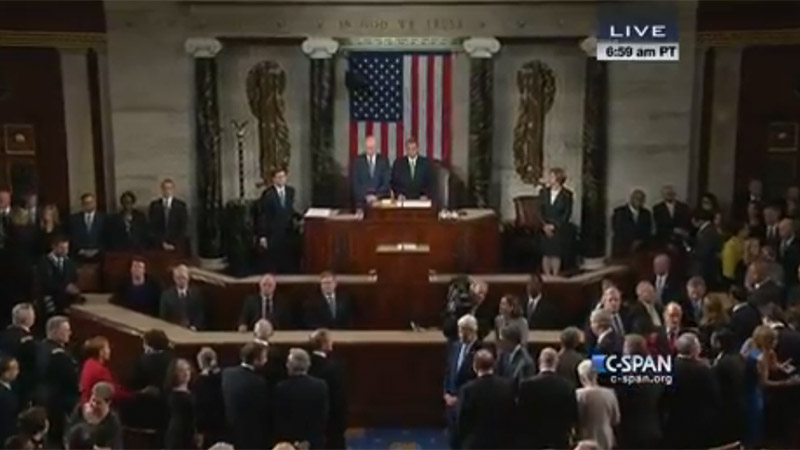 1450 BST: The Pope has already met John Boehner, Republican speaker of the House. “I’m really glad that you’re here” said Boehner, who appeared nervous. Apparently the Pope complemented him on his green tie, saying it represented hope. To which Boehner replied: “We’ll need a lot of hope today.”

Here’s a quick recap of why Boehner and fellow Republicans might find meeting the Pope a little delicate. 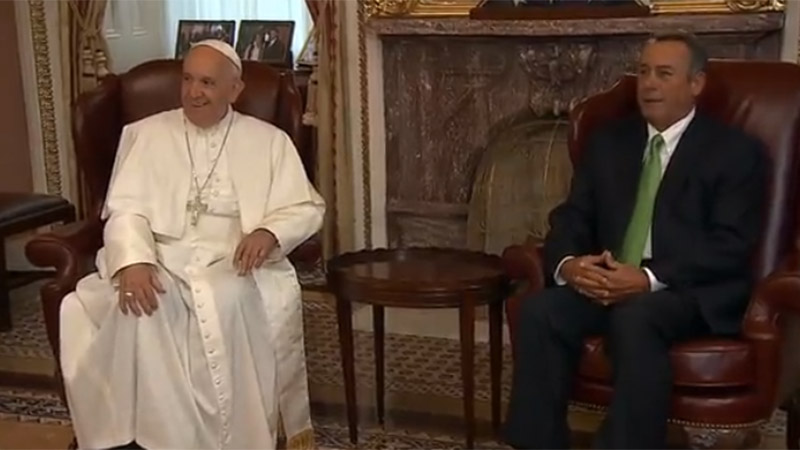 1445 BST: We are minutes away from Pope Francis’ historic speech to the most powerful law making body on the planet – the US Congress.

Yesterday the Pope met President Barack Obama at the White House, where they spoke of the need to address climate change with a global deal to slash greenhouse gas emissions in Paris later this year.

Once he has finished speaking the Pope will leave the Capitol building and address thousands on the Mall, where up to 200,000 people are expected to take part in a rally.

Here’s more from the visit, and brief speeches from both men: