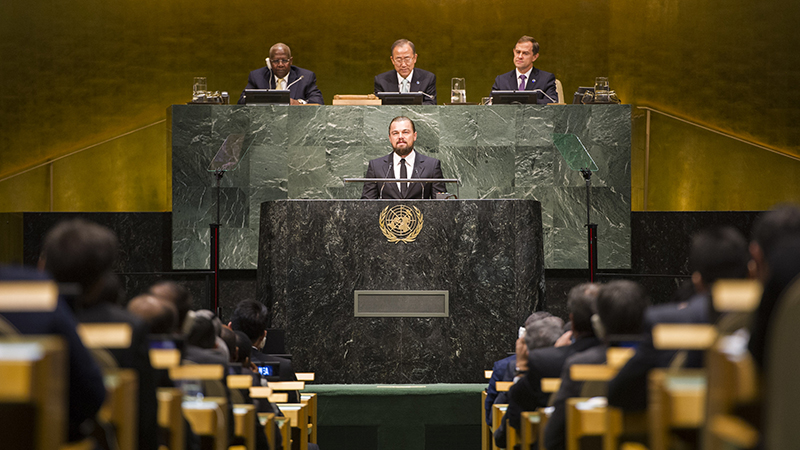 Leonardo DiCaprio at last year’s UN climate summit, which had a mass march through the streets of New York as its high point (Flickr/ UN photos)

Once a year the world’s elected representatives mingle in Manhattan for the UN general assembly.

This year secretary-general Ban Ki-moon has bumped climate change and sustainable development to top of the agenda.

The New York meet will see a new set of development goals signed off, and 40 world leaders gather for a private discussion on ensuring a global climate pact is agreed in Paris later this year.

But campaigners aren’t squandering the opportunity to pressure dignitaries to ratchet up ambition before a key December summit.

On the sidelines is Climate Week. The seventh edition is chock-full of timed announcements, and at its core is the message of the low carbon economy.

The event, which runs from September 21-28 aims to make UN negotiators “see what is happening in the real world of investment, cities and subnational entities,” says Ban’s right-hand man, Janos Pasztor.

Over 100 affiliated events are scattered around the Big Apple, organisers says, culminating in a top event bringing together head honchos of climate-smart firms and politicians.

Here’s what is going on.

40 states and regions unveiled carbon cuts for the first time –  equal to what America emits a year.

The ‘compact’ counts California, the Basque Country and Rio de Janeiro as its members.  They will spare the atmosphere 7.9 billion tonnes of CO2, make up 5% of global emissions and account for 10% of world GDP, it said on Monday.

Scotland “determined to lead by example” on climate: @NicolaSturgeon on #ClimateTV for #CWNYC http://t.co/pEYWJb8MUc pic.twitter.com/rQCYI73xix

Crucially, these are the “dynamos of the global economy”, said Carl Pope, an adviser to Michael Bloomberg who is the UN’s special envoy for cities and climate.

Top governments can set targets, but cities and regions are “where the rubber meets the road,” Pope tells Climate Home.

That number coming forward could reach 300 as sub-national groups lead, and in the case of some like Quebec or South Australia take on laggard federal governments.

A campaign to blacklist coal, tarsands and other polluting investments has swelled 50 times in size on a year earlier, as private firms joined faith-based groups and NGOs which got the cause off the ground.

“Since starting on the campuses of a few colleges in the U.S., this movement has struck a chord with people across the world who care about climate change, and convinced some of the largest and most influential institutions in the world to begin pulling their money out of climate destruction,” says May Boeve, executive director of campaigners 350.org.

Fortune 500 firms pledge to run on 100% renewable electricity Goldman Sachs, Nike and Walmart were among eight new companies boosting the one-year-old RE100 campaign to 36 members on Wednesday.

Timeframes vary on when companies will reach their lofty goals, but the signal is important.

“Climate change is a global issue that requires global solutions. We believe that collaboration is important to accelerate and scale sustainable innovations that have potential to change the world, and Nike is proud to join the leading global brands in RE100,” said Eric Sprunk, chief operating officer at NIKE Inc, who plan to reach the goal by 2025.

Pope lands in US to address Congress and General Assembly

Pope Francis moves up from a short spell in Cuba to meet President Obama and address lawmakers on Capitol Hill.

His pastoral message to Catholics to conserve the planet injected a moral dimension into the climate debate. Yet the Vatican’s posturing has drawn scorn from sceptic Republicans.

Last week he implored European environment ministers to get the “desired result” in Paris. 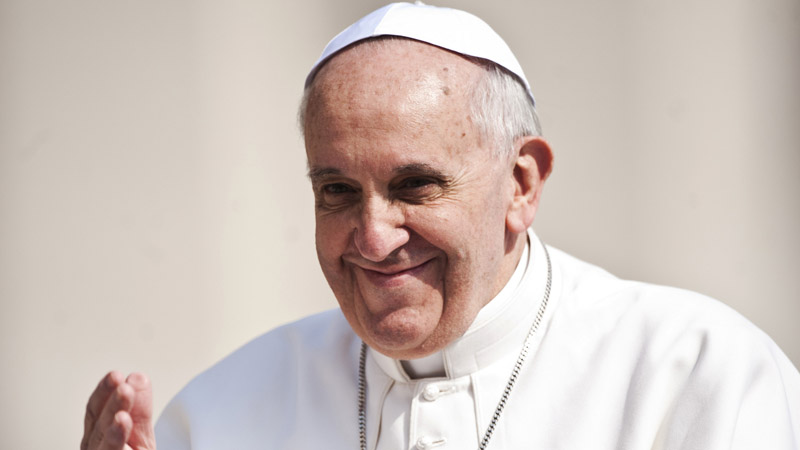 Major emitters yet to submit so-called INDCs are slated to finally show their cards over the week.

Brazil, India, Indonesia and perhaps South Africa will reportedly deliver plans, just days before a defacto deadline to maximising exposure for their efforts.

World leaders will formally ink new goals that will be expected to shape their agendas and policies over the next 15 years.

Last year, the New York Declaration on Forests signed by over 130 governments and businesses pledged to cut net deforestation to zero by 2030.

A year on, an update is expected later this week, said organisers The Climate Group.

With the conference so close, it’s put up or shut up.

Negotiating positions are being refined by countries, and grand interventions from the business community, celebrities and civil society, can only build so much momentum. The last five days of interim talks are slated for Bonn in October.