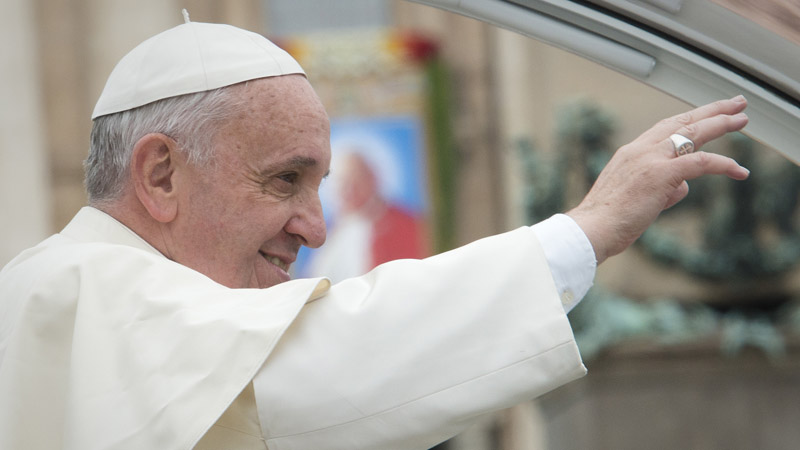 The Pope will make a high-profile trip to the United States next week, with stops in DC, New York, Philadelphia, before flying to Cuba (Pic: Aleteia Image Department/Flickr)

Pope Francis implored European Union officials on Wednesday to get the “desired result” at this year’s crunch UN climate summit, as he renewed an advocacy drive a week before addressing US lawmakers.

In a private meeting with environment heads of the 28-member bloc in Rome, the pontiff encouraged all to back efforts to curb climate change and poverty through new development goals, its official broadcasting service said.

“Dear Ministers, the COP21 summit is fast approaching and there is still a long way to go to achieve a result that is capable of bringing together the many positive stimuli that have been offered as a contribution to this important process,” said a translation of the speech by Vatican Radio.

“I strongly encourage you to intensify your work, along with that of your colleagues, so that in Paris the desired result is achieved.”

The head of the Catholic Church made an unprecedented intervention in a June encyclical providing a moral dimension to claims to conserve the planet.

“We may well be leaving to coming generations debris, desolation and filth,” he told his flock of 1.2 billion worldwide.

Green campaigners warmly welcomed the moral dimension it brought to the conversation. Meanwhile, it rattled climate-sceptic conservatives in the US and Poland.

Almost 200 nations are crafting a global warming agreement to be signed off at a Paris summit known as COP21 in a bid to cap rising temperatures to 2C by 2100.

The UN’s top climate chief yesterday acknowledged that national pledges, that form the backbone of a deal, won’t be sufficient to meet that target. Countries must agree to deepen emission cuts at regular intervals.

The Pope will visit the US from next week, and address Congress on September 24, as countries sign off on ‘Sustainable Development Goals’ at the UN’s annual assembly in New York.

Analysis: Why should you care about the Sustainable Development Goals?

The audience with the EU, the third-largest emitting bloc, comes two days before it finalises its negotiating strategy for Paris.

“Pope Francis is appealing to policy makers directly to care for creation and ensure the poor and excluded are protected from the worst impacts of a changing climate,” said Bernd Nilles, secretary general of the international alliance of Catholic development agencies, CIDSE.

“EU Environment Ministers need to muster the courage and leadership to look beyond short-term electoral cycles and take lasting decisions for the common good.”

Wendel Trio, director at Climate Action Network said the visit “could not be more timely”, with the EU facing scrutiny over the strength of its goals to combat climate change.

“Hopefully, the Pope’s moral weight will have tangible impact on political leaders in Poland. If not the mounting costs of bankrupting coal industry, perhaps their strong Catholic beliefs could convince them to stop blocking further EU action on climate change,” he said.